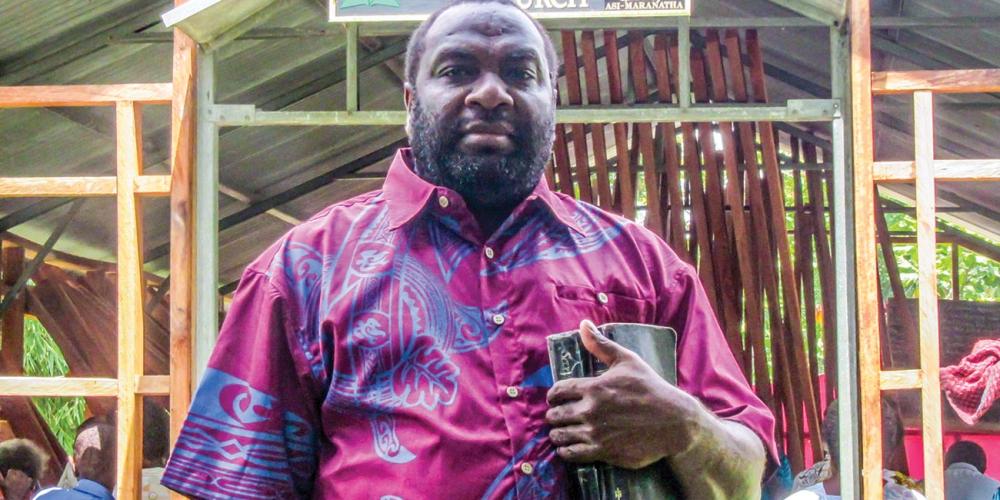 To Sabbath School teachers: This story is for Sabbath, December 10.

rank was raised a spoiled boy in the South Pacific country of Vanuatu.

Unhappy at home, Frank found joy studying at the local Aore Adventist Academy. He made many friends and enjoyed attending church on Sabbath.

However, while in high school, he fell ill and was hospitalized. His parents, worried that he might die, decided to keep him at home when he left the hospital. That was the end of Frank’s education. He never finished high school.

Frank joined other village boys in becoming an ordinary village boy. He lacked skills to get a job. When Father died, his older half-brothers inherited the property, leaving Frank with nothing. Frank became a lost village boy with no purpose or meaning in life.

One thing that Frank had enjoyed at Aore Adventist Academy was carpentry class. He had learned how to make furniture. Remembering the carpentry class, he began to make a living by constructing small pieces of furniture and small houses in his village.

The years passed, and Frank got married and had children.

He gave up making furniture, relying instead on his mother and in-laws to support his family.

He and his wife argued constantly, with his wife telling him to find work to support their children.

There seemed to be no way out.

In desperation one night, Frank fell on his knees and pleaded with God for help.

“Please give me a chance to prove myself,” he prayed.

A short time later, an older half-brother, Ken, offered Frank a carpentry job on a coconut and cocoa farm. Frank, thanking God for the job, quickly put his skills to use by repairing farm buildings.

Later, a cannery hired him as a maintenance worker. His skills caught his supervisor’s attention. When the cannery went bankrupt, the supervisor started his own business and hired Frank to work with him in making furniture and constructing commercial buildings.

As Frank slept, he dreamed that he saw his grandmother delivering a divine message. His grandmother promised that he would become a prominent businessman and own his own company. But, she said, for that to happen he had to be faithful to God.

The dream astonished Frank, and he decided to give his heart to God. He began to go to church every Sabbath.

Within a few years, his dream came true. Frank became the owner of a successful construction and joinery company with a team of employees.

Remembering his desire to be faithful to God, he returned to his home village to reconcile with all his older half-brothers and to make peace with the rest of his family. He found that his half-brothers had constructed a small Adventist church using local building materials. Maranatha ASI had donated materials to build a larger one-day church, but the structure remained unfinished. Frank stepped in to help, designing and building a bigger church.

Frank felt good about building a house for God. He longed to do more. So, he started a ministry to repair and complete unfinished churches across Vanuatu’s 83 islands. Today, he helps fund many church projects through his business and is the head elder in the Bora Bora village church on the island of Santo.

Frank says he has found purpose and meaning in life.

“I am so grateful to God for lifting me from being an unqualified village boy to a qualified commercial carpenter,” he said.

Thank you for your Thirteenth Sabbath Offering this quarter that will help families in Vanuatu and across the South Pacific Division and the world know more about Jesus through a series of animated films based on Steps to Christ, The Desire of Ages, The Great Controversy, and other beloved books by Ellen White.