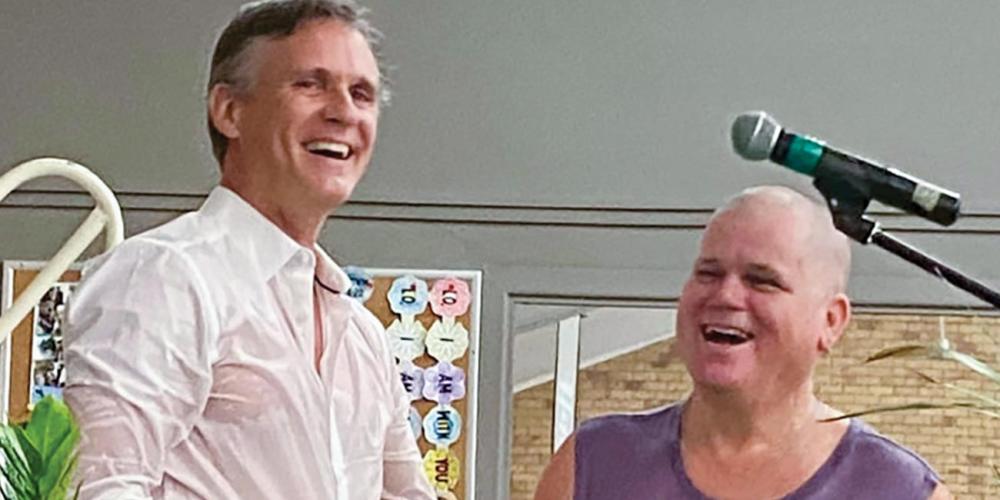 From Coma to Christ

To Sabbath School teachers: This story is for Sabbath, November 5.

hen Peter was 7, he was hit by a car as he crossed a crosswalk outside his school. He was on his way home from school in Brisbane, Australia.

The force of the impact threw the boy more than 50 yards (meters), and he landed on his back. He was in a coma for six months.

While Peter lay in the coma, his grandmother worried about his salvation and arranged for him to be baptized. Following her religious tradition, a priest sprinkled the unconscious boy with water.

When Peter regained consciousness, it became clear that the car accident had affected his mind. He had to relearn basic skills such as eating and using the toilet. He also struggled to read and to understand what people were saying.

Despite the challenges, he persevered in his learning for the next eight years. During that time, his grandmother sometimes took him to her church.

Peter liked going to church. He recognized a God-given hunger within him, and he longed to fill it. He embarked on a spiritual journey to try to satisfy that hunger.

When he was 16, he asked his mother if he could attend church more regularly, not just on the occasional Sunday with his grandmother. Mother agreed, and Peter began attending his grandmother’s church five times every weekend: once on Saturday evening, three times on Sunday morning and once on Sunday evening.

Over the next decade, Peter attended many worship services and visited many churches. He got married and had two daughters. He was working as a cabinet maker when he heard about the Seventh-day Adventist Church from an Adventist customer.

Time passed, and Peter moved into a house located on the same street as an Adventist church in a suburb of Brisbane. He saw the church as he walked to and from the train station every day, and he wondered what it would be like to worship there. One Sabbath morning, when he saw cars arriving at the church, he decided to go inside and find out.

Church members showered Peter with acceptance and friendship. He was invited to join a Sabbath School class. He made new friends. After church, someone even offered to drive him home.

Peter returned to the church the next Sabbath and then the next.

“I found the church people to be so friendly and caring,” he says. “This is one of the things that has kept me coming to this church.”

Peter studied the Bible with the church pastor. As he read, Peter sensed that his spiritual hunger for righteousness was being satisfied. He found all his needs met in Jesus for the first time. He resolved to give his heart to Jesus through the biblically taught method of baptism by immersion. He had been in a coma during his first baptism, unaware of what was happening. Now he wanted to be baptized by his own choice.

On a Sabbath day in 2021, members of Caboolture Seventh-day Adventist Church burst into spontaneous applause as their friend Peter came out of the waters of baptism. His journey of spiritual seeking had reached a beautiful end and an equally wonderful beginning.

Thank you for planning a generous Thirteenth Sabbath Offering that will help spread the joy that Peter has found in Jesus across Australia and the South Pacific Division.