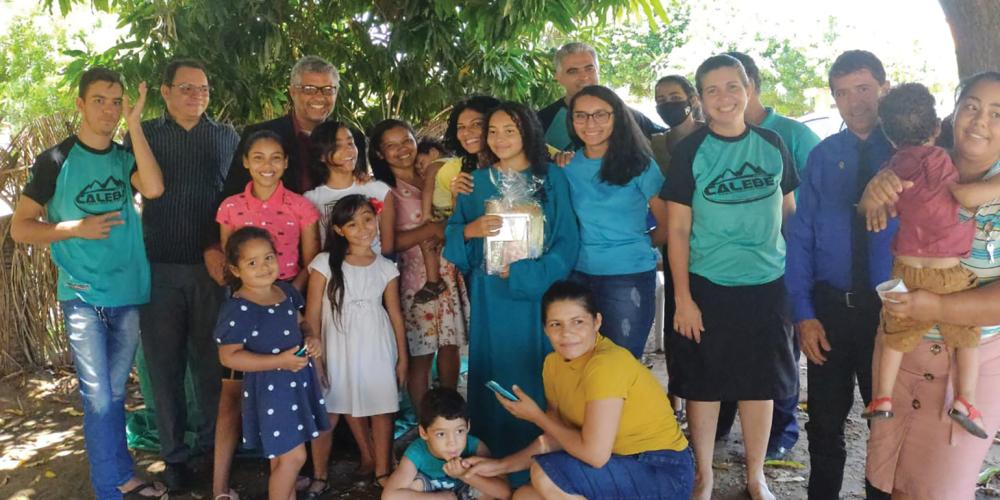 To Sabbath School teachers: This story is for Sabbath, August 20.

he church pastor made a sermon appeal that Karla could not resist.

Karla, a dentist, had recently moved with her husband to northwestern Brazil, and she was praying for God to use her for His glory. The pastor’s appeal stuck in her mind. She wanted to help plant a countryside church. She decided to place a wooden box in the church for people to deposit donations toward the project.

A year passed, and Karla decided to look for a plot of land for the new church. But the rural plots were all very expensive. Then she came across an attractive piece of land on a town’s main street, and she heard that it was being offered for a low price. She found the landowner, and he offered to sell it for only 35,000 Brazilian real ($6,650). She didn’t have the money, but she still dared to make a counteroffer.

“How many monthly installments would you make?” he asked.

“Sixty installments?” he exclaimed. “You want to pay off the land over five years? I’ll go bankrupt in that time!”

“But it’s for a good cause,” she persisted. “It’s to build a church. You will have helped build a house for God. Have you ever built a house for God?”

He conceded that he had not.

“Well, here’s your opportunity,” she said.

He agreed to sell the land. But Karla still needed to find 5,000 real for the down payment. She asked church members for help and managed to collect 2,700 real ($515) by the time that she needed to make the first payment. But she still needed 2,300 real. Then she remembered the wooden box that She had placed in the church for donations. She opened it and found exactly 2,300 real inside. She made the first payment.

After that, Karla made a payment every month until she lost count of how many payments she had made. A year passed. Two years. In the third year, she decided to make a daring prayer to God.

“Dear God, would you please help us pay off the debt this year so we can begin to worship on the land two years early?” she prayed.

She didn’t tell anyone about her prayer, but God heard. Instead of making one payment every month, she made three, four, or five. Every month, she asked the landowner’s wife, who was in charge of the debt, “How many payments are left?” By her calculations, the debt would be paid off the by September of that year.

September finally arrived, and the pastor recorded a video of Karla handing over of the last payment. The property title would soon be delivered. Karla went home filled with indescribable joy.

But at home, she felt uneasy. Her conscience seemed to be asking, “Karla, how many payments have you actually made?” With reluctance, she counted the payment papers. She had made only 48 payments. She felt so disappointed. A year of debt remained to be paid. With great sadness, she reported the error to the landowner.

The next Sabbath, the Sabbath School teacher issued a challenge to the class. “I’m going to pass out pieces of paper,” he said. “Write down something seemingly impossible that you would like to accomplish before the end of the year.”

Karla wrote, “Pay off the land for the church.” The goal seemed impossible.

But in October, she managed to make five payments. In November, she made four, and in December she made the last three. Church members celebrated the completion of the land purchase on December 19.

Today, 20 church members attend worship services every Sabbath at what they call their “Church Under the Mango Tree.” They are gathering under the shade of a mango tree while the church building is under construction nearby.

Karla says, “We love our God who can do all things with all our hearts.”

Part of this quarter’s Thirteenth Sabbath Offering will help establish four more new churches in Brazil. Thank you for planning a generous offering on September 24.