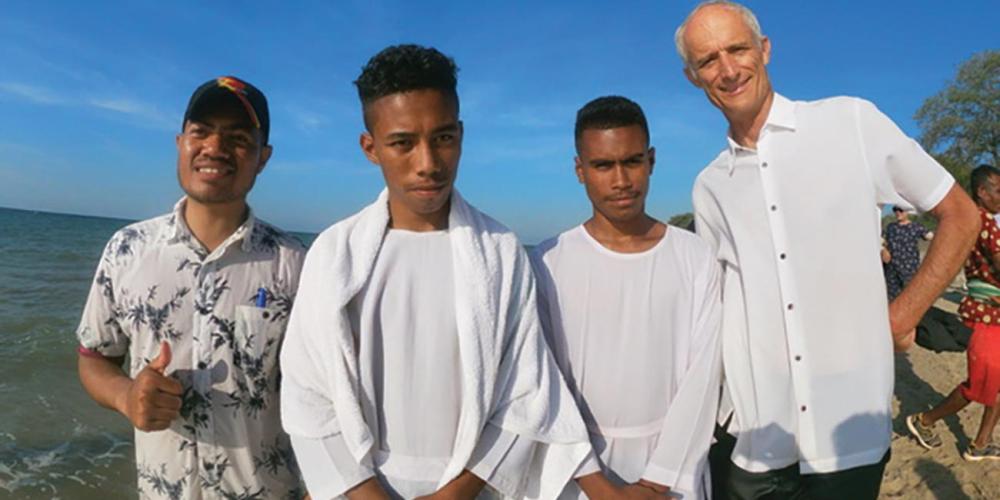 To Sabbath School teachers: This story is for Sabbath, January 29.

The Global Mission pioneers were dispatched to the mountains to reach out to speakers of the Fataluku language, one of 30 languages spoken by the 1.3 million people of country. The couple had an advantage: Fataluku was Lusio’s mother tongue. Not knowing where to start, the couple embarked on daily prayer walks in the four villages of their district. After some time, they decided to offer after-school tutoring in math and English in their rented house.

The after-school classes soared in popularity, with an initial 12 children swelling to 57 in weeks. Each afternoon, the classes opened with a Bible lesson and prayer. After two months, children began telling their friends that Jesus is coming soon and asking whether they wanted to go to heaven. Several children wanted to join the Seventh-day Adventist Church. Lusio and Yelri felt hopeful.

But things changed in the third month. Children who did not attend the classes began to disrupt the proceedings by threatening and interrogating the students. Before long, only four to six children were showing up for tutoring in the afternoons.

Finally, the landlord of the rented house told Lusio and Yelri that they had to leave.

The couple moved to a smaller house where they could no longer tutor children.

Later, Lusio organized evangelistic meetings in one of the four villages after several villagers expressed a desire for baptism. By the end of the meetings, nearly everyone in the village was attending. Lusio and Yelri felt hopeful.

But then Lusio was stopped by a woman as he went to the watering hole to fill his three-container limit for the week. “Don’t distribute your papers to my people and try to convert them,” she said.

“I know you and your motives,” she said. “Don’t you mess with me. You are trying to convince my people to go to your church by offering money.”

It was a false accusation. No money had been offered to anyone.

Abruptly, the teacher struck Lusio with her hand. Her adult son, who was standing nearby, punched Lusio. Then the mother and son picked up stones and threw them at the Global Mission pioneer. None of the stones hit him. As a crowd gathered, someone threatened to shoot Lusio and ran home to get a rifle. Friendly villagers shielded Lusio as he fled the village.

Two months later, an Adventist leader arrived to speak at evangelistic meetings in another of the four villages. The crowd grew daily, and Lusio and Yelri felt hopeful.

But one night, several men began hurling stones in the meeting tent. One stone struck the head of a volunteer nurse, causing blood to stream down his face. The meeting was suspended for the night.

More flying stones awaited people as they left in a church-rented truck for the ride up the mountain to their homes. The villagers were afraid. Suddenly, seven tall men in bright shining clothes appeared. The strangers were seen only by three astonished young men, who watched them walk away from the site, becoming smaller and smaller until they disappeared up the mountain. No more stones were thrown.

Upon hearing about the seven shining men, the villagers had no doubt that God sent His angels to protect His people. “The angel of the Lord encamps all around those who fear Him, and delivers them” (Psalm 34:7, NKJV).

The next Sabbath, 13 young people surrendered their lives to Jesus and were baptized. Among them were two young men who had seen the angels.

Your Thirteenth Sabbath Offering six years ago helped open the first and only Seventh-day Adventist school in Timor-Leste’s capital, Dili. Part of this quarter’s offering will help construct a dormitory at the school so that children from faraway mountain villages can study at the school. Thank you for planning a generous offering.