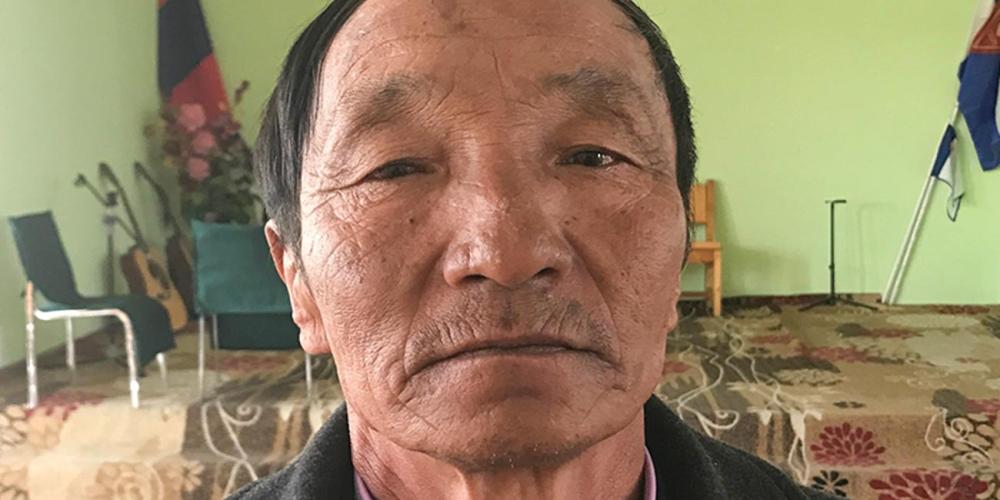 The first Adventist work in Mongolia was carried out by Russian missionaries, in 1926, operating out of Hailar in Manchuria, China. They issued the first Seventh-day Adventist publications in Mongolian: a printed hymn, and four small tracts. Political changes made it impossible to work directly in the country, so work was started in 1930 for Mongols in Inner Mongolia (in northern China). In 1931, Otto Christensen established mission headquarters and a hospital in Kalgan.

To Sabbath School teachers: This story is for Sabbath, October 2.

worked as a hook-man on construction projects in Mongolia.

One day, I was nearly finished unhooking a load on the third floor when the hook abruptly moved. I took a big stick and tried to push the hook back into place. But the hook came back and hit me hard, knocking me off the wall. I remember hitting the ground three floors below. Then I lost consciousness.

The nearest hospital was far away, so a physician rushed to the construction site.

Sometime later in the afternoon, I woke up and learned that my leg was broken and my spinal cord had been injured.

“We cannot take you to the hospital because of your injuries,” the physician told me.

At that time, Mongolia was not as developed as it is now, and the country lacked good medical equipment. The physician didn’t know exactly what had happened to me. He said my back was broken, but that was all he knew.

I lay paralyzed in bed for two years. I could not move. During that time, several foreigners visited my town. I didn’t know it at the time, but now I know that they were missionaries, spreading the gospel.

I have eight children, and the eldest was in the eighth grade. All of my children went to the foreigners’ meetings. Although we were not religious people, I never forbade them from going. My children brought the foreigners to my home. At the time, I didn’t understand what was happening, but now I know they were praying for me. Because of their prayers, I was healed quite quickly.

I grew stronger and started physical therapy. I put bars and ropes above my bed and started exercising. Lifting my head hurt at first, but my children’s prayers worked. Soon I was hobbling with a cane.

My children became very active in the Seventh-day Adventist church and liked singing there. I enjoyed Sabbath worship services as well. As I studied the Bible, my life began to change. I used to drink a lot, but now I stopped drinking. It was a big change. I wanted to be faithful to God. My wife and I were baptized and joined the Adventist Church.

Several years after regaining the ability to walk, I started suffering pain in both legs. Fear set in. I worried that I might become paralyzed again.

After a medical checkup, the physician looked grim.

“You have to undergo surgery, but it will be risky,” he said.

He explained that my spine was damaged and required medical attention.

My family was asked to sign a waiver releasing the hospital from any responsibility if the operation went awry.

My wife and I prayed a lot. The church pastor prayed for me. I think that the surgery was successful because of those prayers. Even the surgery wounds healed quickly. I was allowed to go home after just a week.

Today, I am well and healthy. My family is Christian, and we want our friends to become Christians, too. We invite them to our church, and some have come. But none of my friends have given their hearts to Jesus. I am not worried because I believe that God can reach them. After all, God reached me on my sickbed. My job is to invite, and the Holy Spirit’s job is to convict. I have invited more friends recently to church, and I hope that they will come.

Thank you for your Thirteenth Sabbath Offering this quarter that will help open an Adventist lifestyle center in Mongolia’s capital, Ulaanbaatar, where people can receive support to stop drinking and learn to make other important lifestyle decisions.

The first Adventist work in Mongolia was carried out by Russian missionaries, in 1926, operating out of Hailar in Manchuria, China. They issued the first Seventh-day Adventist publications in Mongolian: a printed hymn, and four small tracts. Political changes made it impossible to work directly in the country, so work was started in 1930 for Mongols in Inner Mongolia (in northern China). In 1931, Otto Christensen established mission headquarters and a hospital in Kalgan.