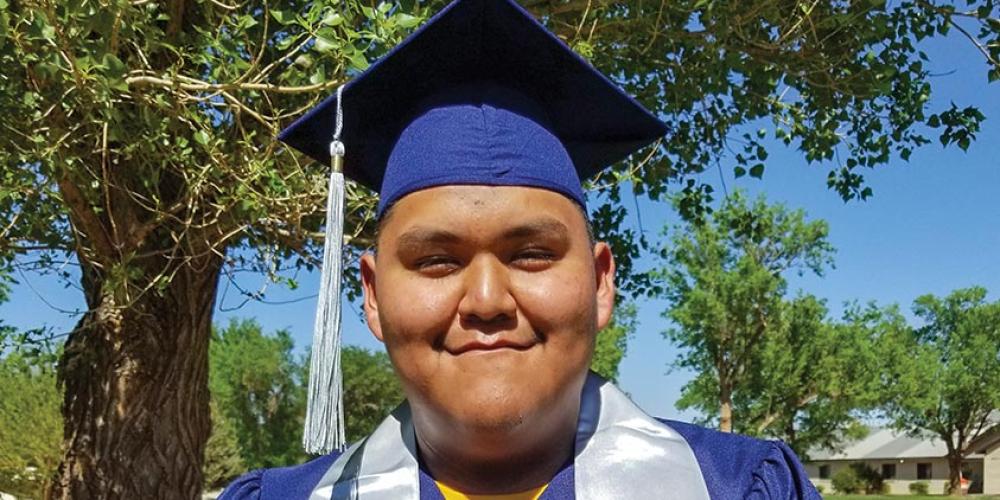 Happy to Be Back

To Sabbath School teachers: This story is for Sabbath, July 3.

Adventist Mission featured Adrain for a children’s mission story in second quarter 2018. He was just finishing twelfth grade at Holbrook Seventh-day Adventist Indian School, a mission school for Native Americans, in the U.S. state of Arizona.

Adrain did not know his father, and his mother often drank. When he was 7, an older brother taught him how to drink alcohol and use drugs. Adrain didn’t think anything was wrong with his life, and he didn’t want to live at Holbrook when he was enrolled there for the third grade. But he learned many new things at the school, including the importance of taking baths and washing his clothes. He stopped drinking and using drugs. He found that playing basketball in the gym helped cheer him up when he felt sad. In the seventh grade, he studied the Bible with the pastor and gave his heart to Jesus.

Let’s find out what has happened to Adrian since his twelfth-grade graduation. Here is his story in his own words.

graduated from Holbrook Indian School in 2018. I had given my life to Jesus, and He helped me overcome drugs and alcohol and find a purpose in life. Following in the footsteps of one of my uncles, I decided to become an engineer. I enrolled at Union College, an Adventist school in Nebraska, and began a new journey as a college student.

Everyone at the college was so nice and friendly and happy. Even strangers greeted me.

I made friends in classes, choir, and intramural sports. I was invited to study the Bible with religion students and loved all of the spiritual programs the school had to offer, including the After Glow vespers program on Friday evenings.

Everything was going great until I found out that my education was going to cost a significant amount of money. I had no idea. When I received the bill, I was shocked.

The next year I decided to go to the school on the Navajo Reservation. After doing some online research, I saw that a technical college in New Mexico had a good engineering program. I was excited to continue my education there without having to worry about the high cost of a private Christian school.

After I arrived, however, I quickly realized that the school didn’t have any other Christian students with whom I could socialize. The temptation to drink and use drugs was overwhelming. I was able to avoid getting caught up in that lifestyle, but I was lonely.

By the second semester I was so lonely that I couldn’t take it anymore. I spoke with staff at Holbrook Indian School who had kept in touch with me. Amazingly, a position had just opened up, and they wanted me to come back to Holbrook to work as a taskforce dean and to continue my education through the school’s college transition program.

The difference between the atmosphere at the technical college and Holbrook Indian School is huge. Holbrook is my home. I am happy to be back.

I would like to return to Union College to finish my education, and I am praying that God will provide a way for me to return without going into debt. I know God has a plan for my life. Please pray for me as I continue to follow Him wherever He leads me.

Thank you for your Thirteenth Sabbath Offering three years ago that helped kickstart plans for a new gym and health center called New Life Center at Holbrook Seventh-day Adventist Indian School. Your offering this quarter will help finish the second phase of the center, where the school will address high rates of obesity, heart disease, diabetes, depression, and suicide among Native American children and youth.