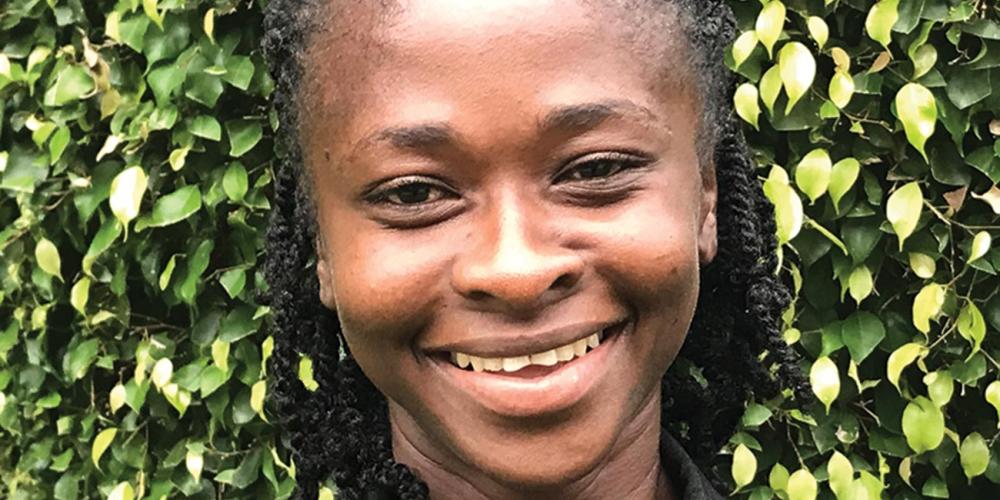 To Sabbath School teachers: This story is for Sabbath, April 24.

oelia was eager to finish cooking the Sabbath meal before sundown in Chase Village in Trinidad and Tobago.

She had worked as the main Bible worker for an evangelistic series that had resulted in 25 baptisms. Now a woman from the meetings who was thinking about baptism had invited her over for a Friday evening Bible study.

Noelia was cooking a favorite Guyanese dish, Boiled and Fried Provision, on a six-burner gas stove in her rented one-room apartment. She was waiting for the sweet potatoes, cassava, eddoes, and plantains to finish frying.

Her cell phone beeped behind her on the bed, signaling the arrival of a text message.

She turned her head around to look. Then …

A loud explosion rocked the apartment.

The force of the blast threw Noelia across the room, and she landed with her back against the wall.

As she fell from the wall, an unseen hand seemed to set her down on her feet and firmly push her back across the fire-filled room and out of the front door.

Outside, Noelia screamed for help. Her words were incomprehensible, but neighbors saw the flames coming out of her apartment door. Someone called for an ambulance, and the dispatcher advised to keep dowsing Noelia with water until the ambulance arrived.

Someone began throwing water from a bucket on Noelia, and two other people tried to extinguish the fire in the apartment. Noelia was grateful for the cool water. Her head felt like it would pop off, and her skin had an unbearable burning sensation. She was suffering second-degree burns.

The ambulance whisked her to an emergency clinic that was closer to her apartment than the hospital. She needed to be stabilized.

The clinic doctor asked the paramedics what had happened.

“The gas canister exploded as she was cooking in her home,” a paramedic said.

“How is she in one piece?” the doctor asked in disbelief. “She should be dead. No one lives after a gas canister explosion.”

“You must have a purpose for my life,” she prayed. “That’s why You saved me.”

After she was stabilized, she was sent to the hospital. Late that night, a friend from church invited Noelia to her home.

Noelia was happy to leave the hospital, but the pain was dreadful. Church members were shocked when they heard about the explosion and saw her on Sabbath. They prayed with her and sang songs.

By Sabbath sunset, Noelia could no longer walk. Her legs had swelled up like big balloons and felt extremely heavy.

For the next month, female church members took turns staying with Noelia during the day. Pastors visited and prayed with her. Recovery was unexpectedly rapid. After a month and a half, she was able to walk again, and soon she was back to her old self. The doctor expressed surprise at how quickly her skin healed.

“I don’t believe in luck,” Noelia said. “I believe it’s a blessing from God. This is the answer to the prayers of church members.”

After the explosion, Noelia’s relationship changed with God. She had always loved Him, but now she trusted Him more. She stopped worrying about everyday problems, remembering that God had saved her for a purpose and she could trust in Him.

Nine months after the incident, the woman whom she had planned to meet on the day of the explosion gave her heart to Christ.

Today Noelia is serving God with all her heart. She helps manage an urban center of influence that reaches out to people from non-Christian religions in Trinidad and Tobago.

“Nothing can keep me from doing God’s work,” Noelia said.

Part of this quarter’s Thirteenth Sabbath Offering will help open a Better Living “center of influence” on the campus to train students to be missionaries at University of the Southern Caribbean in Trinidad and Tobago. Thank you for supporting mission with your Sabbath School mission offering.