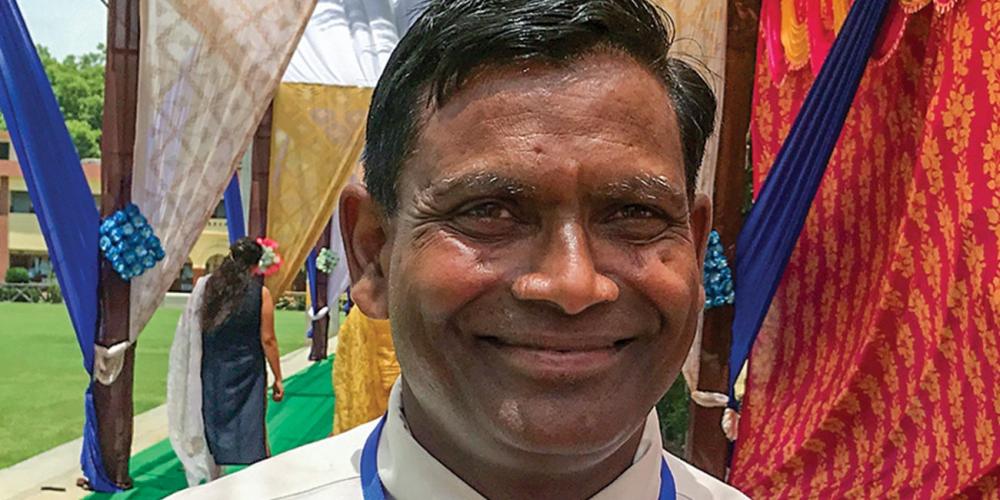 Lion in the House!

To Sabbath School teachers: This story is for Sabbath, December 5.

Gulam Masih had many questions about God.

Father couldn’t decide who to worship. Once while reading the family’s holy book, he exclaimed, “It seems that Jesus is mentioned in this book more times than our own prophet! Why is that?”

The family created their own unique religion that was part traditional and part Christian.

As Gulam grew older, he increasingly preferred Christianity. But he wanted to know more. He longed to see Jesus with his own eyes.

“Jesus, I would like to see you face to face,” he prayed.

As a young man, he decided to leave the family home and move into a hut on the outskirts of a faraway village, Chakwal. He wanted to study the Bible alone for several weeks.

The villagers were not Christian and very superstitious. They noticed Gulam had a quiet, kind demeanor. When he offered to pray for a sick villager, and the villager recovered, they nicknamed him “Holy Man.”

The villagers respected him as a holy man and came to his hut every morning and evening with food.

In the hut, Gulam prayed and read the Bible. He studied Daniel and Revelation.

He repeated his prayer to see Jesus.

“Lord, I want to see you,” he prayed. “Please reveal Yourself to me.”

One night, as he prayed and read the Bible while seated on the dirt floor, he sensed a presence in the room. Looking up, he saw a large lion. As he watched, the lion crouched down and stared straight at him.

Gulam was frightened, and he shrank away from the beast. Then he heard an audible male voice.

“Fear not,” the voice said. “Run your hand along the lion from its head to its tail.”

“I can’t do that!” Gulam exclaimed. “The lion will kill me!”

“But you have been praying to see Me,” the voice said.

“Jesus is the Lion of Judah,” the voice said. “Pet the lion.”

Gulam had read about Jesus being the Lion of Judah in Revelation 5:5. He was frightened, but he didn’t dare disobey. He lifted a trembling hand and placed it on the lion’s head. The lion didn’t move. Slowly, his hand still shaking, he stroked the lion from the head to the tail. When he stepped away from the lion, the animal shook its tail, whipping up dust from the dirt floor. Then the lion walked out into the dark night.

In the morning, a village woman came to the hut with breakfast. She stopped when she saw lion tracks. Dropping the food, she rushed back to the village.

“The Holy Man is dead!” she cried. “He has been killed by a lion. I saw the tracks going into his hut.”

The villagers ran to the hut. They found Gulam sitting on the floor, reading the Bible. He hadn’t moved since the lion left. When the villagers heard his story, they were amazed. They begged to learn about his Jesus.

Later Gulam learned about the Sabbath and became a Seventh-day Adventist pastor. He planted an Adventist church in his home village, Dharam Kot Bagga, in northern India. He had five sons and two daughters and died in 1999 at the age of 90.

His youngest son, Samson, 48, praises God for the lion experience.

“God loves to fulfill the desires of our hearts,” he said.

Part of this quarter’s Thirteenth Sabbath Offering will help construct a new church in Amritsar, where Samson Gulam Masih has served as the pastor. Thank you for planning a generous offering.