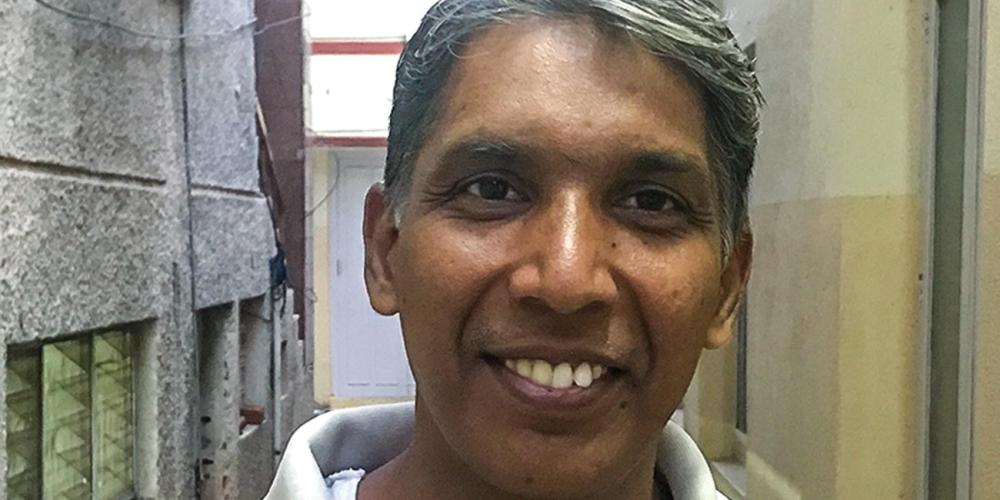 To Sabbath School teachers: This story is for Sabbath, November 14.

Wilbur Pereira found himself riding in a car with a cousin whom he hadn’t seen in 30 years.

As they traveled to a wedding in south-central India, Wilbur’s wife called to see how he was doing.

The cousin, Walter, looked over with surprise. Not many people are Christian in India. “What is your religion?” he asked.

Wilbur explained that he had gone to a Christian church every Sunday since childhood, but he had stopped believing many of its beliefs.

“Everything is pagan,” Wilbur said. “The Bible says, ‘I am the Lord your God, you shall have no other gods before Me.’ I am searching for the truth.”

“Don’t worry,” Walter said. “You are close to the truth. One day God will lead you to the true church.”

At the wedding, the banquet was comprised only of vegetarian food. Wilbur was disappointed not to see any pork.

Back at home, he resumed his search for truth. He visited non-Christian places of worship in his hometown, Bengaluru. He knew God was somewhere, and he wanted to find Him.

Wilbur grew increasingly convinced that his childhood church had strayed from the Bible. On a Saturday, he told his wife, Nancy, that he no longer wanted to attend church with her.

“I will not go to church with you anymore,” he said. “It’s a false church with pagan beliefs.”

That evening, Nancy called family members to ask them to persuade Wilbur to go to church with her, but he stood firm. At the same time, he wondered which church to attend.

In the morning, he was still pondering which church to attend as he walked to a shop to buy groceries for lunch. Suddenly he heard a quiet male voice.

Wilbur pulled out his cellphone and called Walter. After telling him about the disagreement with his wife, he asked which church his cousin attended.

“I go to the Seventh-day Adventist Church,” Walter replied.

Wilbur had seen Adventist church signs but knew nothing about the denomination.

Nancy opposed Wilbur’s new faith, and she argued with him daily. But she watched with surprise as his lifestyle slowly changed. She liked that he no longer used tobacco and drank alcohol. She was amazed that he prepared food for Sabbath a day early. She couldn’t understand why he stopped eating eggs and dairy and giving them to their young son.

Wilbur explained that he wanted to honor God in all his actions, including by keeping the Sabbath and treating his body as the temple of God. She had to admit that his health was much better than hers. She suffered chronic neck-aches.

When the Adventist church organized a free health clinic, Wilbur invited Nancy to go with him and learn something about good health. She was moved to hear a physician describe the close connection between physical and spiritual wellbeing. That was a new idea for her. Back at home, she joyfully called friends to tell them about the clinic.

The next Sabbath, she declined an invitation to go to church but allowed Wilbur to take their son for the first time. The boy loved the children’s Sabbath School, the children’s story in church, and the fellowship meal afterward. That evening, he eagerly told his mother about everything that he had seen. Nancy’s curiosity was raised, and she asked for Bible studies. Upon learning about the Sabbath during Bible studies a few days later, she immediately took a stand.

“I will never work on Sabbath again,” she declared. “Even if I lose my job, I will not work.”

Today, Wilbur and Nancy are full-time medical workers, educating people about good health in India. “We reach out to people in need, teach health principles to them, and connect them to the True Healer,” Wilbur said.

This quarter’s Thirteenth Sabbath Offering will help build two churches in Bengaluru, the nearest big city to the place where Wilbur now lives with his family. Thank you for planning a generous offering.