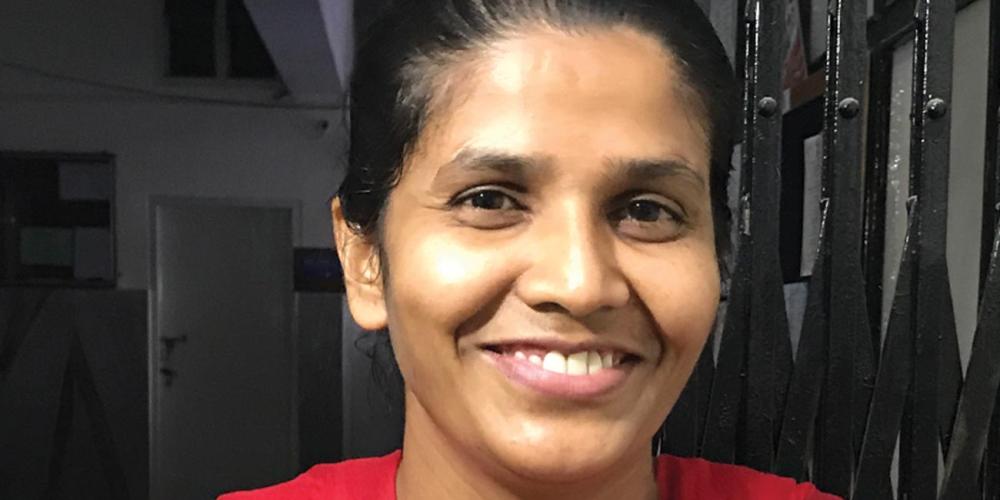 To Sabbath School teachers: This story is for Sabbath, October 31.

By Rashmi Ravi Chandra, as told to Andrew McChesney

I was born into a non-Christian family, the eldest daughter of six girls.

As a young woman, I was attracted to the Christian life. After a while, I fell in love with a Seventh-day Adventist man, Ravi. I gave my heart to Jesus, and we got married.

After our marriage, we lived happily for three months. Then I fell ill. I had fainting attacks in which I would pass out suddenly during the day. My parents thought that demons had possessed me because I had accepted Christianity and turned my back on their religion. Nevertheless, my father suggested that I call an Adventist pastor for prayer.

Ravi and I went to a pastor’s home in our city, Bengaluru, and he laid his hand on my head.

“If it is Your will, O Lord, that she continues in this new life as a Christian, please use her mightily in Your ministry and take away all satanic power,” he prayed.

As my husband slept peacefully that night, I had a disturbing dream. I dreamed that a group of men wearing black robes gathered around me. One of them stood much taller than the rest, and he was yelling at me. A man in a black robe took hold of my hand tightly and pointed to the angry, tall man.

“Why did you go to the Adventist Church?” he said, pointing. “That tall man is your god. You have to worship him. You should not go to Jesus.”

The tall man was furious. I was too scared to look at him, and I put down my head and wept.

A moment later, someone wearing a white robe approached me from behind and placed his hands on my shoulders. I couldn’t see his face, only his clothing. I felt his touch. It was soft and gentle.

“Do not fear. I am with you,” he said with a gentle, melodious voice.

Gesturing to the tall man in black, he said, “Now you can look at his face.”

With the assurance of his hands on my shoulders, I was able to look directly at the angry man in black. His face was cruel and twisted in anger toward me.

The next morning, Ravi and I returned to the pastor’s house to relate the dream.

“That was the Lord Jesus who placed His hands on your shoulders,” the pastor said.

The fainting attacks ceased from that day.

I wish that I could say that my life changed all at once, but it took time. Before getting married, I was very stubborn. Even though I gave my heart to Jesus, elements of my culture remained in my mind. I didn’t think that Sabbath was important. But after my dream, my husband and the pastor started praying for me. Gradually I gave up some things and stopped engaging in everyday activities on Sabbath.

Then I had another dream. I heard a gentle voice say, “Don’t sin. You will soon stand in the judgment.” It was a pleasing voice, and I was not afraid despite the astonishing words.

I woke up. It was around midnight, and I told my husband about the dream.

“That must be the Holy Spirit,” he said. “Satan never talks about judgment. Be careful.”

After that dream, I prayerfully examined my life. With God’s help, I became less stubborn. I began to pray a lot more for God to help me to overcome temptation. My husband and I prayed much more together. I began to participate in church outreach.

Today we have two sons, ages 10 and 6, who sing and play music in church. I am a government employee and work on Sundays instead of Saturdays. My desire is to be a witness to people who are not Christians. I’m thrilled that two coworkers have expressed an interest in coming to my church.

I thank God for the two dreams. Through the dreams, I realized that Jesus is always with me, I made a firm decision to give my all to Him.

Part of this quarter’s Thirteenth Sabbath Offering will help construct two churches in Bengaluru. Thank you for planning a generous offering.