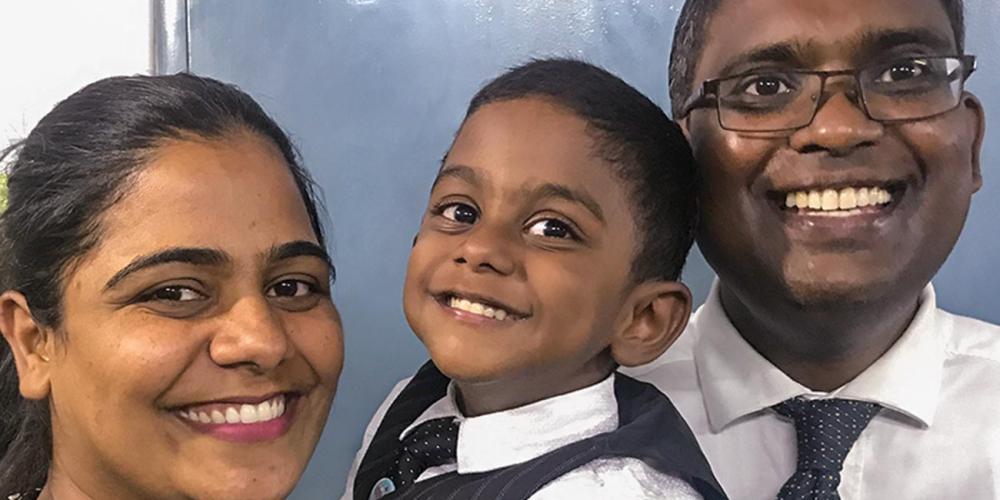 India, as a country, was administered by Britain from 1858 until it gained independence in 1947.

To Sabbath School teachers: This story is for Sabbath, October 17.

We wanted a baby.

After two years of marriage, I told my husband, Daryl, “We’re haven’t had a baby. Let’s ask the doctor why.”

Daryl agreed, although he didn’t want to go. At the hospital, we spoke with the physician. “I’m not able to conceive,” I told her. “Can you help us?”

She agreed, but Daryl said, “You know, we haven’t prayed about this. True, it has been two years, but I would like to pray first and then come back.”

The physician asked how long we wanted to pray. Daryl, who is a pastor, said a month. So we prayed, and I conceived. We were so excited! I rushed to the physician, and she confirmed that I was pregnant. She cautioned, however, that the baby looked small.

I went for regular checkups. After five months, the physician said the baby was not growing normally. Daryl and I were very concerned. “Don’t worry,” the doctor said. “I’ll give you some medicine that will help the baby gain weight.”

On the next checkup, my weight had increased, but the baby’s weight was the same. “Come back again in a few weeks,” the doctor said.

At the next checkup, the radiologist was concerned. “Something is wrong,” he said. “I don’t think the baby will survive.”

The physician got a second opinion. That doctor recommended an abortion. Daryl and I were heartbroken. We prayed. “Lord, we have been serving You,” Daryl said. “Show us what to do.”

Daryl called his twin brother who works as a pediatrician elsewhere in India. He recommended another hospital. At the new hospital, a doctor ran tests. “The baby looks normal to me,” she said. “Let’s see how long we can prolong this pregnancy.”

“What are our chances?” Daryl asked.

“You are a pastor,” the doctor replied. “You believe in prayer. Pray. There is power in the hand of God.”

I was hospitalized. Every hour, the hospital staff checked on the baby. That night a young doctor doing his residency approached us. “You look like a happy couple,” he said. “Why are you worried?”

He said he had been born into a non-Christian home but had accepted Jesus.

Bowing his head, he prayed, “If You can make the sun stand still, You can perform a miracle in the life of this pastor’s family.”

His prayer gave us confidence that God would do something.

Two days later, the doctor expressed concern. “The baby is small,” she said. “But don’t worry. We will do our best.”

The baby was born on a Sabbath morning. He weighed only 1.5 pounds (680 grams). The doctor was so happy when the baby began to cry, and she placed him on ventilator. She didn’t know what assurance to give us, saying only, “We are doing our best.”

Adventist students from a nearby medical college came and sang to us on Sabbath afternoon. We were so happy.

We trusted God would do whatever it took to save the boy’s life.

It was so hard to see such a small baby with so many tubes. We couldn’t touch him. We could only sing and pray.

“Do not be dismayed, God will take care of you,” Daryl and I sang.

In three days, the baby’s weight dropped to 1.3 pounds (600 grams). The doctor was worried about an upcoming operation that she had scheduled to save the baby’s life. I asked a visiting Adventist doctor to pray.

“Lord, humanly I don’t know whether this baby can survive,” he prayed. “But you are a miracle-working God. If it is Your will, You can increase the weight of this baby to fight. May this baby be a testimony.”

The next day, the baby had gained 0.35 ounces (10 grams). Every day after that he gained weight. When he reached 3.5 pounds (1.6 kilograms) after three months, the doctor announced that he could go home. “Your little fellow has been hospitalized for quite a while,” she said. “I think he is ready to go home.”

Another doctor marveled that the baby had survived. “This is the result of your prayers,” he said. “It truly is God’s hand.”

We named the boy Neshaun, which means “miracle” in Hebrew. We hope he never forgets that he is a miracle. We have dedicated him to serve God as a pastor one day. Psalms 150:6 says, “Let everything that has breath praise the Lord” (NKJV). Every breath that Neshaun takes is a testimony that he is praising the Lord. Praise the Lord!

India, as a country, was administered by Britain from 1858 until it gained independence in 1947.