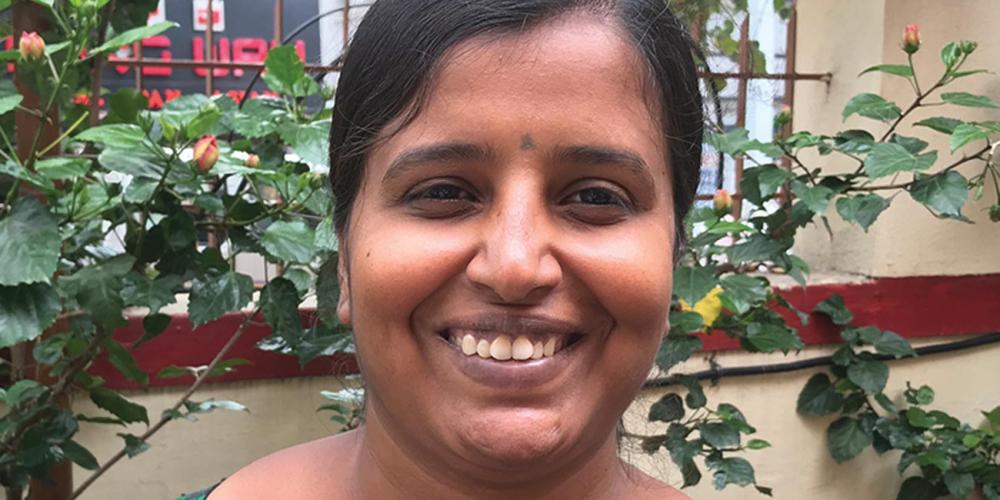 To Sabbath School teachers: This story is for Sabbath, October 3.

Nine years ago, Jayasheela lived in extreme poverty in the countryside of south-central India.

Her husband, Venkatesh, struggled to find work as a mason. Jayasheela stayed at home to care for their 4-year-old son and 2-year-old daughter. She paused every day to bow before three photos of stone gods in a makeshift family shrine.

On Fridays, she and her husband fasted and prayed to the stone gods from sunrise to sunset.

Despite their devotion to the gods, their prayers went unanswered. Food was scarce. Sometimes a kind neighbor provided a few greens. Other times, the family went hungry. Jayasheela wondered why the gods were ignoring her family. She looked for other gods who might answer her prayers.

One day, she noticed a Christian church that worshipped on Sundays, and she went to services with her husband and two children. She wanted to find the true God.

Suddenly, she had a medical crisis. She gave birth to a baby girl who struggled to breathe, and the physician could do nothing. “She is beyond help,” he said.

Jayasheela asked the church pastor to pray. He prayed to Jesus, and the baby recovered. Jayasheela wondered whether she might have found the true God. After that, whenever one of her three children fell ill, she turned to the pastor for prayer. The children always recovered, and she never needed to go to the hospital.

But then the pastor died. Jayasheela was distraught. She had depended on the pastor’s prayers for all her needs.

One day, all three of her children fell ill. She didn’t know what to do. To whom could she go? Her church temporarily lacked a pastor as two men argued over which of them would lead. She didn’t know how to pray to Jesus on her own. She was scared. Weeping, she picked up a Bible and tried to read it. She only had a fourth-grade education, but somehow she managed to make sense of the words. She desperately searched for information about Jesus. As she read, she was surprised to learn that Jesus worshipped on the seventh-day Sabbath, not on Sunday. She went to her church, which by now had chosen a new pastor.

“Saturday is called a holy day in the Bible,” she told the pastor. “Why do we worship on Sunday?”

The pastor didn’t like the question, especially coming from a woman with little formal education.

“You are devil-possessed,” he snapped. “Jesus took away all the laws. Don’t worry about it.”

Jayasheela accepted the answer. But then she heard a 12-year-old girl recite the Ten Commandments at a church prayer meeting. She heard the girl repeat the fourth commandment, “Remember the Sabbath day to keep it holy” (Exodus 20:8).

Afterward, the pastor praised the girl for memorizing all the commandments. Jayasheela wondered why the pastor would find it important to memorize the Ten Commandments if Jesus had done away with them.

A short time later, Jayasheela visited the pastor’s home and saw a copy of the Ten Commandments hanging on his wall. Now she really was confused. She wondered why he would hang the Ten Commandments on the wall if they were no longer valid. For the first time in her life, she prayed to Jesus. “Jesus, please show me the truth,” she said.

That night she had a dream. She dreamed that she was running in a race and someone abruptly stopped her. She woke up, dismayed that she had been stopped from finishing the race. Unable to sleep, she prayed, “Jesus, I was running in the race, and now I don’t know which way to go. Please show me the way.”

A few days later, she was contacted by a relative whom she hadn’t seen in seven years. He told her that he had joined a church that kept all Ten Commandments, including the Sabbath.

Today, Jayasheela and her husband are faithful Seventh-day Adventists and have opened a house church in their new home in the countryside. The family no longer lives in poverty. On a recent Sabbath, 15 villagers gave their hearts to Jesus at the house church.

Jayasheela believes that God answered her prayer by showing her the way.

Part of this quarter’s Thirteenth Sabbath Offering will help construct two churches in Bengaluru, the nearest big city to Jayasheela’s home. Thank you for planning a generous offering.