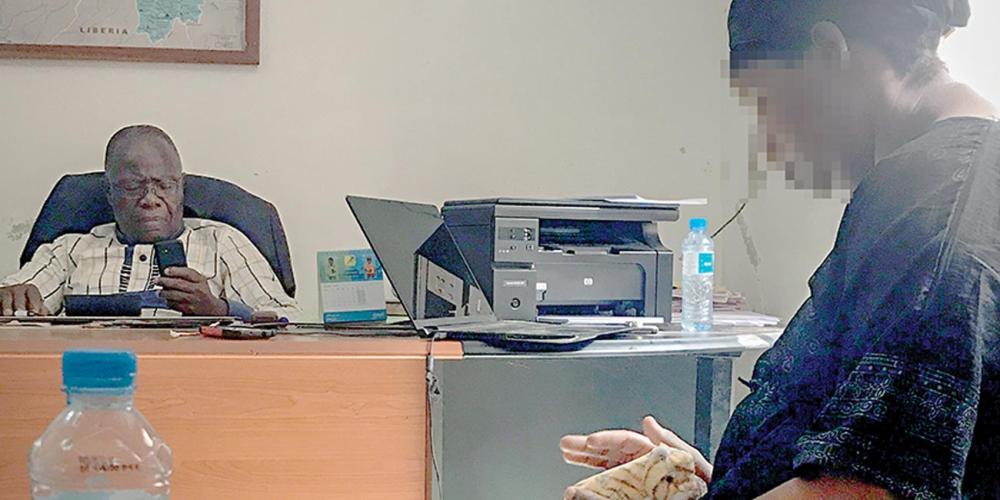 To Sabbath School teachers: This story is for Sabbath, September 19.

Mother was furious when she learned from cousin Hamadou that her daughter Maria had a Bible.

Mother had raised Maria in a non-Christian world religion in the West African country of Guinea, and she didn’t want her to become a Christian. Mother marched over to Maria’s house in Conakry.

“Where is your Bible?” she demanded.

Mother stormed into the bedroom. She searched everywhere but couldn’t find it. “I didn’t see the Bible anywhere,” she said.

Maria looked into the bedroom. The Bible lay in plain sight on a table.

The next Sabbath, Maria went to the Seventh-day Adventist church for a second visit. As a result, she skipped work at the big store that she owned. Mother didn’t understand why she hadn’t worked.

“Where were you?” she asked.

“I was in church,” Maria replied.

Mother looked upset. Maria didn’t know that her family’s religion opposed Christianity and even taught that it was praiseworthy to kill a family member who became a Christian.

“Mother, I am happy to work during the week, but I can’t work on Saturdays anymore,” she said.

From that day, Mother began to beat her.

“I would rather see you dead than to see you dishonor us,” she said.

When the beatings didn’t change Maria’s mind, Mother blocked her bank account. Maria, who was used to living a luxurious lifestyle, expressed confusion when she lost access to her funds. Mother blamed the problem on the Adventists.

“Those Christians have somehow managed to steal your money,” she said.

Maria wasn’t dissuaded from her convictions.

“I have learned that when you have problems you should pray and give them to Jesus,” she said.

The beatings continued. Then Mother called Maria’s husband, a polygamist who lived with his other wife in Germany. After the phone call, he gave Maria an ultimatum. “Choose between me and your God, Jesus,” he said.

“Let me ask you a question,” Maria said. “Can you forsake your God because of me?”

“Then why do you ask me to choose between you and my God, Jesus?” she said.

After that, he refused to answer the phone when Maria called.

When Mother saw Maria still clung to her faith, she announced drastic steps.

“My daughter, since you don’t listen to me, I have to kill you,” she said.

A few days later, she came over to Maria’s house and prepared a favorite stew. Unknown to Maria, the stew contained a deadly poison. When the stew was ready, Mother asked Maria to carry the pot to the table. Maria was hungry but she wanted to take a bath first. She promised to eat afterward, and Mother left.

As Maria bathed, a cat came out of nowhere and jumped onto the table, knocking the pot to the floor. Maria didn’t own a cat. That night, Mother called to inquire how Maria felt.

Mother’s astonishment was evident over the phone.

A few days later, cousin Hamadou poured the poison into Maria’s bottle of drinking water. After drinking, Maria bent over with a severe stomachache.

Hamadou saw her agony and told her what he had done.

“I’m so sorry,” he said. “The witchdoctor asked me to put medicine into your drinking water to purify your body.”

Immediately Maria called Jacob Gbale, president of the Seventh-day Adventist Church in Guinea, to pray for her. He came to her house and gave her five charcoal pills. Thirty minutes later, she vomited.

The witchdoctor called that evening to find out whether Maria was dead. He was shocked to hear her answer the phone.

Mother enlisted another cousin to help. He arrived at Maria’s house with two friends and a poison-filled syringe. After sending the housemaid on an errand, he injected Maria in the left arm and fled.

The housemaid didn’t go far beyond the house before remembering that she had forgotten her cell phone. She found Maria unconscious on the floor with the syringe lying nearby. Knowing that Maria and Pastor Jacob were friends, and she called him for help. The pastor and two church elders brought Maria to church headquarters and prayed for her. Maria vomited and recovered.

Maria has no doubt that Jesus protects His children.

“He can solve a crisis because He knows crises before they happen,” she said. “Psalm 68:20 says, ‘Our God is a God who saves, from the Sovereign Lord comes escape from death.’”