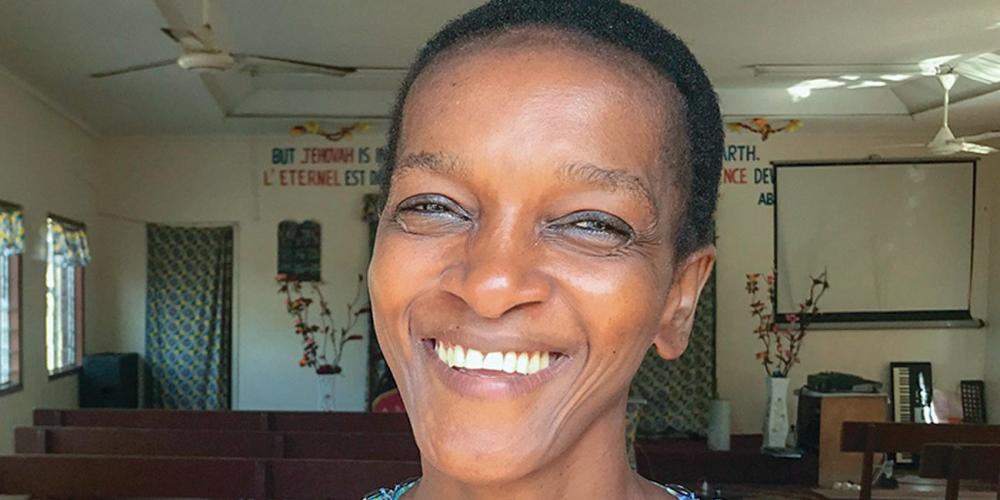 To Sabbath School teachers: This story is for Sabbath, July 25.

Angelique Abeme fell in love with Peter when she was 15. He was 20.

The couple moved in together and had two girls in Oyem, a city in northern Gabon. Life was hard. Peter drank and smoked. Angelique loved him.

When Angelique was 25, Seventh-day Adventist neighbors invited her to evangelistic meetings. She had many questions about the teaching that the seventh day is the Sabbath, and she wasn’t satisfied with the evangelist’s explanations. On the final Friday of the two-week meetings, the evangelist suggested that she ask her own pastor about the Sabbath. She determined to do just that.

Walking home that evening, she met her pastor on the road.

“Pastor, is Sunday or Saturday the true Sabbath?” she asked. “The Adventist Church says the Sabbath is on Saturday, according to the Bible.”

The pastor didn’t argue with her.

“What you have been told about Saturday is the truth,” he said. “You have learned the truth. Try the Adventist Church.”

Life grew more complicated after Angelique was baptized. She asked Peter to marry her but he refused. When she asked him to leave the house, he moved across the country to Port-Gentil, a city 250 miles (400 kilometers) to the south. Angelique prayed every morning and night that Peter would know Jesus.

She sent Bible studies to Peter by mail.

In Port-Gentil, Peter ran into trouble. An employer accused him of theft and, even though Peter professed his innocence, he was imprisoned for three months. In prison, he had a lot of time to think. He had nothing to do. So, when an Adventist chaplain offered Bible studies, he readily accepted. Shortly before his release, he was baptized.

Angelique learned from a friend that Peter was in prison, but she had no idea about the Bible studies. She continued to pray for him every morning and evening.

After Peter was released, he called Angelique to tell her about his new faith.

“Now I understand why you wanted me to move out,” he said. “I am so happy to be an Adventist.”

Angelique was overjoyed. She still loved Peter. She changed her daily prayers to ask that Peter’s life show the fruits of his faith. She wanted him to never drink or smoke again.

Peter called regularly to ask about Angelique and their daughters. During one call, Angelique told Peter that she planned to take their younger daughter to a week-long Pathfinder camporee in Port-Gentil. Peter and Angelique agreed to meet at the camporee. It had been six years since they separated.

At the camporee, Peter greeted Angelique with a big smile and a warm hug. They had a warm two-hour conversation, and Peter left. Angelique saw that his life really had changed. He wasn’t smoking and drinking. He had a sweet disposition.

Peter returned for more conversations during the camporee. After the camporee ended, Angelique stayed in Port-Gentil for another week to talk with Peter. That’s when Peter proposed.

That was eight years ago. Today, Peter serves as a church elder in Gabon’s capital, Libreville, and loves Jesus with all his heart. Angelique couldn’t be happier.

During those dark days, she found hope in Matthew 6:33, where Jesus said, “But seek first the kingdom of God and His righteousness, and all these things shall be added to you.”

“Our first goal should be to seek the kingdom of God,” Angelique said. “If you are a believer but your spouse isn’t, keep praying because God can work a miracle in the heart. After six years, God answered my prayers.”