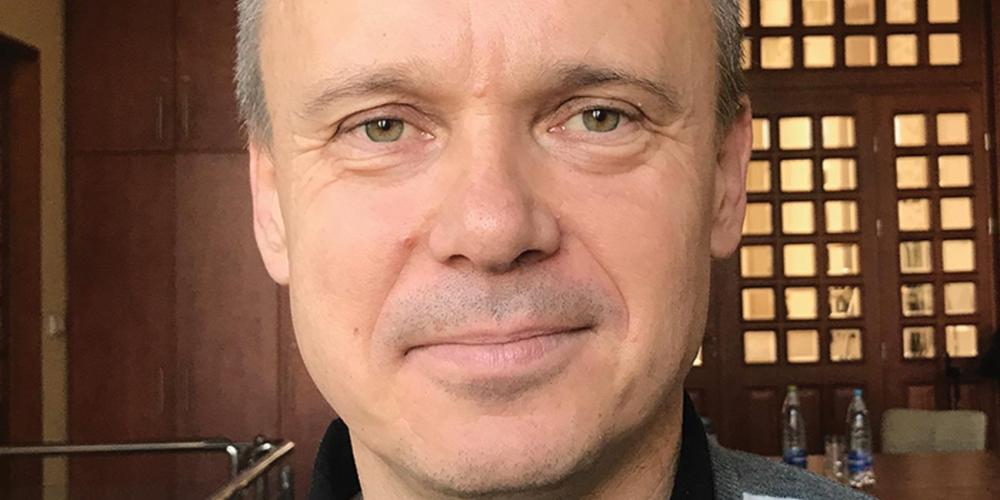 The first Adventist church in Poland is now actually in Russia. In 1888, J. Laubhan, and H. Szkubowicz moved from Crimea to what was then eastern Poland. Their three years of work resulted in a church in Zarnówka in Volhynia.

To Sabbath School teachers: This story is for Sabbath, May 2.

After months of weekly worship services, seven inmates were ready for baptism in Poland.

But how and where to baptize them?

Pastor Mariusz Maikowski had an idea. The inmates could be baptized in the Baltic Sea at an upcoming youth camp meeting.

Mariusz asked the prison warden for permission to release the inmates for four days — one day to travel by train to the sea, two days for the camp meeting, and a day to travel back to the prison. Under Polish law, inmates who exhibit good behavior and have completed two-thirds of their sentences are allowed to leave prison for short periods.

The warden granted special permission for six of the seven inmates to make the 250-mile (400-kilometer) trip to Jaroslawiec. The following week, Mariusz arrived at the prison with several church members to take the prisoners to the train station.

Another inmate, Jurek, heard about the baptisms and decided that he also wanted to be baptized. Having served two-thirds of his sentence, he left the prison a day early and made arrangements to join the Adventist group on the train.

The train ride was a joyful occasion. A church member pulled out his guitar, and the group happily sang Christian songs.

Partway through the trip, the train arrived at the station where Jurek planned to board. But Jurek didn’t show up.

On Sabbath, the six inmates were baptized in the Baltic Sea.

Two days later, the prison guards and inmates were surprised to see all six prisoners. They had placed bets on how many would run away.

Jurek, however, didn’t return, and a warrant was issued for his arrest.

With the police looking for him, Jurek couldn’t get a job. He holed up with some criminal friends and invited his 17-year-old brother to join them.

One evening, Jurek and his younger brother drank heavily in a city park in Toru in northern Poland. A nurse passed by on a bicycle, carrying a bag of apples for coworkers at the hospital. The two men robbed her, raped her, and strangled her.

After a police manhunt, Jurek and his younger brother were jailed.

For 20 years, Jurek’s story bothered Mariusz. Jurek had been so close to baptism. If only he had boarded the train.

One day, a female church member approached Mariusz in Lublin, an eastern city where he was serving as pastor. She said her sister was dating a former prisoner who needed a place to stay.

The pastor met with the man, Tomek. He did know a lot about the Bible, and he began to visit the church. An Adventist landlord leased an apartment to him.

But Tomek harbored deep resentment toward God. He often erupted in rage, cursing God, during Bible studies in his apartment.

“You believe in God because you have a good family and a good life,” Tomek told the pastor. “I was born into a dysfunctional family. My father and brothers were criminals. My mother was a drunkard. My older brothers spat in my soup. One regularly raped me. So how can I believe that God is good?”

Mariusz wondered how to respond. During one Bible study, he spoke about how a single bad decision can ruin a life. Remembering Jurek, he related his story.

“You see, Tomek, this man was very close to God,” he said. “But one wrong decision destroyed not only his own life but also the life of his younger brother.”

Tomek turned pale and looked at Mariusz with wild eyes. The pastor was scared. The two men were alone in the apartment, and Mariusz remembered that Tomek had been jailed for murder.

Tomek started to cry. “This is incredible,” he said, weeping.

“What are you talking about?” Mariusz asked.

Tomek gazed into the pastor’s eyes. “I am Jurek’s younger brother,” he said.

Today, Tomek is thinking about baptism and trying to stop drinking. His influence at an alcoholic rehabilitation center has led two other people to baptism. His brother Jurek remains in prison.

“The story of Jurek shows that when you are close to God and He speaks to you, you should make a decision immediately and not delay,” Mariusz said.

After all, Isaiah 55:6 says, “Seek the Lord while He may be found, call upon Him while He is near.”

“Part of this story is sad,” Mariusz said. “But it also shows the great power of God and what He can do in our lives. Imagine meeting Jurek’s younger brother after 20 years and being able to teach him about God.”

Thank you for your Thirteenth Sabbath Offering in 2017 that helped build a television studio for Hope Channel in Poland, broadcasting the gospel to the Polish-speaking world.

The first Adventist church in Poland is now actually in Russia. In 1888, J. Laubhan, and H. Szkubowicz moved from Crimea to what was then eastern Poland. Their three years of work resulted in a church in Zarnówka in Volhynia.