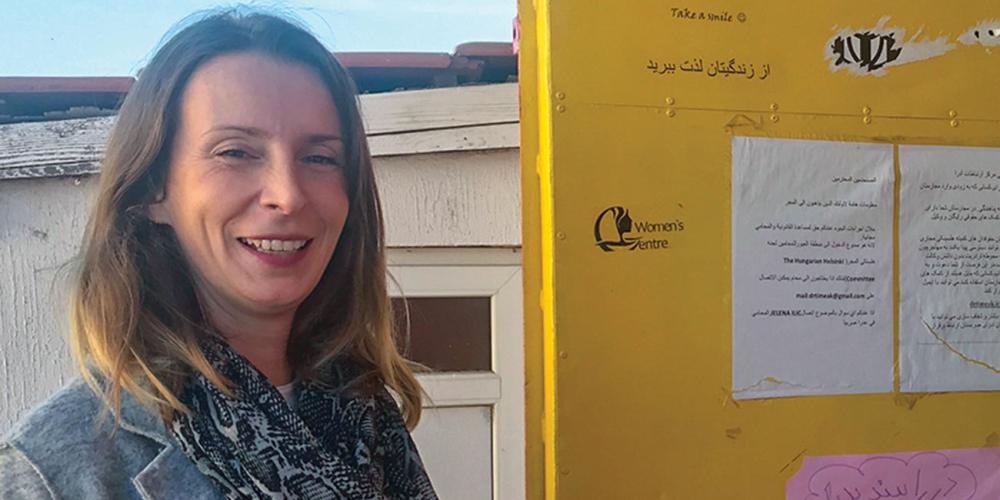 The first tracts in the Serbian language were printed in Hamburg in 1893 to 1896, although there were no baptized Adventists in Serbia.

To Sabbath School teachers: This story is for Sabbath, April 18.

Daniela Marinkovi’s parents never studied beyond high school, and one of their biggest dreams was to see their daughter graduate from the university.

But Daniela rebelled under what she felt were unfair expectations.

“This isn’t your decision but my own,” she declared. “I’ll do whatever I want with my life.”

Still, to make her parents happy, she entered a university in Belgrade to study the Russian language. Because this wasn’t her first choice, she studied halfheartedly and soon quit.

But Daniela wasn’t particularly worried. She was 20 and easily landed a job at the local call center of an international telecommunications company.

Over the next few years, she got married to a fellow Seventh-day Adventist and settled down. But work left her unsatisfied. It was boring. It lacked creativity and dynamism. She began to dread the daily grind.

The routine broke when she gave birth to a son. The 29-year-old mother left work for three years of maternity leave. During that time, she thought a lot. She couldn’t imagine spending the rest of her life working at a job that she regarded as boring and unfulfilling. Regret filled her as she remembered how carelessly she had quit the university. Without a university degree, employment options were limited.

The summer before maternity leave ended, Daniela and her family visited her father and his new wife in Macedonia. Her father had remarried after a divorce.

Her stepmother, a psychologist, encouraged Daniela to resume her studies.

“Why don’t you prepare for the entrance exam and enroll at the university?” she said.

“But I have a child and a family and a house to take care of,” Daniela protested. “Also I need to go back to my job at the call center.”

As the two women conversed, Daniela began to believe that she could balance her home, work, and classes. Daniela applied to study psychology in Belgrade and prepared for the entrance exam.

The university, however, scheduled the entrance exam for a Saturday.

Daniela appealed to the president of the Adventist Church in Serbia for help. He wrote a letter to the university, but the reply letter said, “We’re sorry, but we cannot change the date for one person.”

Daniela was keenly disappointed. The university seemed out of reach. She told a relative, a well-educated woman, about her difficulties.

“It’s simple,” the relative said. “Enroll in a university that doesn’t have the entrance exam on Saturday. After a year, transfer to the Belgrade university.”

Daniela found a university in Novi Sad, the second-biggest city in Serbia, that offered the entrance exam on a Friday. She passed the exam.

The next year was extremely busy. Daniela had two days a week off work. On Saturdays, she worshipped God. On Mondays, she spent the day at the university, attending classes. On the other days, she worked from 7 a.m. to 3 p.m. and then drove to the university for classes. Her mother helped with her son.

“I prayed to God all the time, and I was convinced that I was doing the right thing,” Daniela said. “I had some kind of inner power that pushed me to keep going and to pass my exams with top marks.”

After nine months, the telecom-munications company laid off 10 percent of its employees, about 100 people, amid a reorganization. Daniela was let go. She saw the decision as a blessing because she had more time for her classes and family.

When the first year of studies ended, Daniela decided not to transfer to the university in Belgrade. The professors accepted her and her Sabbath beliefs.

Money didn’t prove to be a problem. Her grades improved after she was laid off, and the university granted her a full scholarship. In addition, she found a summer job cleaning houses in Germany.

Daniela’s parents were proud when she graduated. Their joy grew when she went on to earn a master’s degree in psychology, graduating in October 2018.

Today, Daniela is 41 and works as ADRA field coordinator for a refugee women’s center in Belgrade. She loves her work.

“My job is not boring,” she said. “I was so happy when I got it. It is dynamic and creative. It is everything that I wanted to do.”

The first tracts in the Serbian language were printed in Hamburg in 1893 to 1896, although there were no baptized Adventists in Serbia.