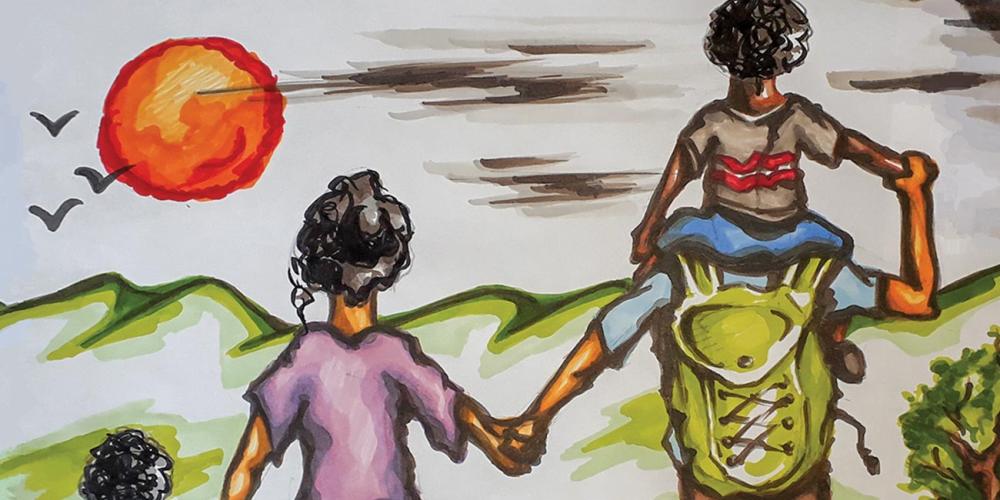 The missionaries invited the brothers to stay for the 10 days needed to complete the treatment.

To Sabbath School teachers: This story is for Sabbath, May 25.

Children kept knocking on the door of Juan and Juanita’s house on the compound of the Seventh-day Adventist hospital in Africa.

Juan and Juanita, married medical volunteers from Argentina doing a one-year mission term, were living on a small stipend, but they gladly shared rice and other simple foods from their kitchen.

Then it struck Juan and Juanita. Some of the children weren’t hungry at all and seemed to have other challenges, perhaps emotional needs.

“We asked ourselves if we were really helping them,” Juan said.

Determined to understand the children better, Juan and Juanita visited the village of a teenager who did odd jobs for them. The teen’s own home astonished them. He had two little brothers, ages 3 and 5, who lived alone. Moreover, it was winter, and the boys were ill.

The teen wasn’t home for much of the day, and the couple decided that asking him to give medicine to his little brothers daily would be too much to expect. Remembering that they had an extra room at home, they took the small boys back to the hospital compound. They invited the brothers to stay for the 10 days needed to complete the treatment.

As the boys’ health improved, Juan and Juanita learned that they had no father. Their mother was working far away and could not send for them. Juan and Juanita decided to keep caring for the two boys.

The couple helped the boys with their basic needs, enrolled them in the Adventist school, and took them to Sabbath School.

During family worship, the boys heard stories from the Bible, and they especially identified with miracles such as how God’s people were led out of slavery in Exodus.

Despite their young age, the boys even took the initiative to help with chores. One morning Juanita woke up to find the 5-year-old in the kitchen, standing on the tips of his toes at the sink, washing dishes.

“He smiled at my wife and said he knew we were tired and just wanted to help out to let us rest a bit longer,” Juan said.

Time passed, and Juan and Juanita longed to meet the boys’ mother. They thought that she must be very loving and honorable to have such noble sons.

When the couple’s one-year term with Adventist Volunteer Services ended, they made arrangements for the boys to live with local friends.

After a while, Juan and Juanita returned for a new mission term and learned that the teenage brother had died. His mother had taken away her young sons.

Juan tracked down the mother and visited her and her sons.

“It was a blessing to find them,” Juan said. “She is a lovely person. We spent time with her. The boys were shy because we hadn’t seen them for some time.”

When their second mission term ended, the couple decided to visit the reunited family one last time. Juan spent about a week with them, building a friendship with the mother as he helped her with legal paperwork and other practical issues. Juanita had to work during the week but joined them on the weekend.

Together, the couple presented the family with a box of children’s Bible books with beautiful illustrations, a Bible for each family member in their native language, and Ellen White’s “The Great Controversy.” Under a tree, they led a special Sabbath School class and church service for the community, and then said goodbye.

“It was a beautiful moment because we felt that a chapter in our lives had closed,” Juan said. “We pray that the Lord will water the seeds that have been sown.”

The African experience changed the hearts of Juan and Juanita. They noticed that Ellen White wasn’t only a prolific author with prophetic insights. She also had a living faith, practicing what she preached by caring for needy children in her own home.

“For me this was revolutionary,” Juan said. “Many times you see missionaries working in the community, but how often do they bring the mission work to their homes?”

Missionaries who do this can entertain unseen angels, Juan said, pointing to a favorite passage in Ellen White’s “Desire of Ages,” page 639: “As you open your door to Christ’s needy and suffering ones, you are welcoming unseen angels. You invite the companionship of heavenly beings. They bring a sacred atmosphere of joy and peace. They come with praises upon their lips, and an answering strain is heard in heaven. Every deed of mercy makes music there. The Father from His throne numbers the unselfish workers among His most precious treasures.”

Juan — who was 30 when he and Juanita helped the boys and is now 34 — appealed to Adventists to be vulnerable and to practice the gospel by bringing the mission work to their homes and, by God’s grace, reaching people’s hearts.