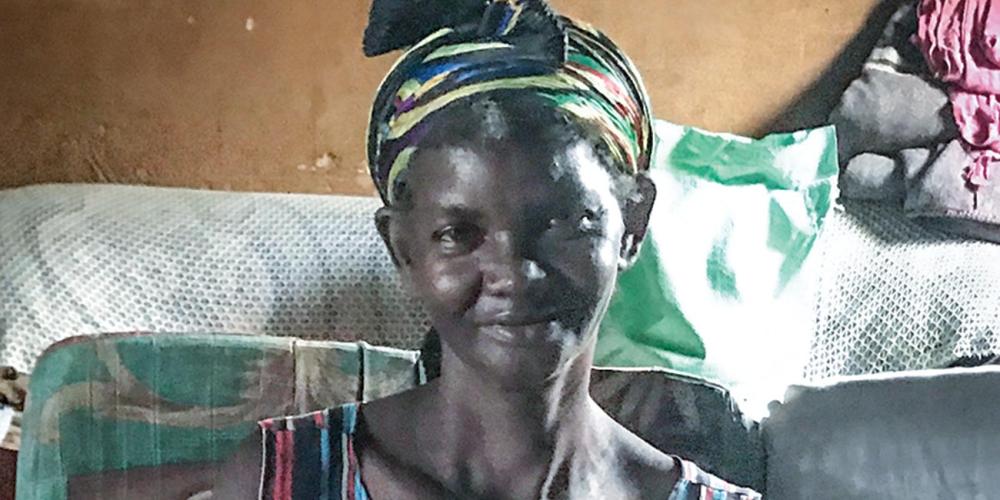 Friendship Is the Secret

Woman with no legs leads more than 40 people to Jesus.

To Sabbath School teachers: This story is for Sabbath, March 16.

Something went terribly wrong as Vitalina prepared to give birth to her second child in São Tomé and Príncipe, a tiny island nation off the coast of West Africa.

She began to bleed heavily, and doctors mistakenly gave her the wrong type of blood during a blood transfusion. The baby boy was born safely, but Vitalina suffered a severe infection in her legs. To save her life, doctors amputated both legs.

When she returned home from the hospital nine months later, she found that her husband had moved in with another woman.

Depression overwhelmed her, and she considered suicide.

Then an elderly Seventh-day Adventist friend started visiting. The woman gathered Vitalina’s dirty clothes and took them to a nearby river to wash every week. When the woman’s doctor forbade her from wading into the river for health reasons, she summoned other church members to take over the laundry work.

Vitalina was grateful for the assistance, but she felt uncomfortable.

“I was shy because I wasn’t Adventist,” she said. “I couldn’t understand why they would wash clothes for me.”

She gave the women only some clothes for washing and hid the rest in a room. For two weeks, she told her visitors, “That’s it. I don’t have many clothes this week.”

The Adventist women couldn’t believe it, and they searched her house. They found the pile of dirty clothes in a corner and washed them.

Vitalina prayed for God to help her survive. After a while, she secured an old, hand-operated sewing machine and taught herself to cut fabric and make pants. Her business flourished, and she had five more children with her husband, who periodically visited. Then her husband died.

A church member discussed the Bible with Vitalina, but she wasn’t interested. She didn’t want to change her diet.

Then an Adventist pastor led a two-week evangelistic series.

“When I went to the evangelistic series, I began to realize the wonderful things that God had done in my life,” Vitalina said. “He answered my prayers to learn a way to make money with the sewing machine. This is one of the reasons that I accepted the gospel.”

Vitalina attended every night and was baptized. Eager to share her newfound faith, she told her personal testimony to everyone who would listen.

“Look at me,” she told people who stopped by her home. “God is working in me, and I’m able to work. God is wonderful, and you need to trust Him.”

Through such conversations, Vitalina convinced seven people to go with her to the Adventist church, located two miles (three kilometers) away. Vitalina paid their bus fare for weeks. All seven people are now baptized church members.

Vitalina also organized a Bible study group outside her home, and six people were baptized.

Soon, 40 people were baptized, including two of her children, and church leaders drafted plans to open a church in her neighborhood. Lacking funds to buy land, the church accepted an offer from Vitalina to build a temporary structure outside her house. The wooden church building was constructed in September 2017.

“I’m so happy to see the church at my front door,” Vitalina said, seated on a couch in her living room. “But even more than that, I’m happy to see so many people converted.”

Vitalina said that the secret to leading others to Christ is being a friend.

“It is difficult to lead people to God without friendship,” she said. “I make friends with those in the community and invite them to church.”

Her favorite Bible verse is Matthew 6:33, where Jesus said, “But seek first the kingdom of God and His righteousness, and all these things shall be added to you” (NKJV).

“This verse encourages me because it says if I put God first, He will give me everything that I need,” she said. “And He has.”

Part of this quarter’s Thirteenth Sabbath Offering will help construct a church in São Tomé, where most members meet in basements and dilapidated structures. Thank you for your mission offering.