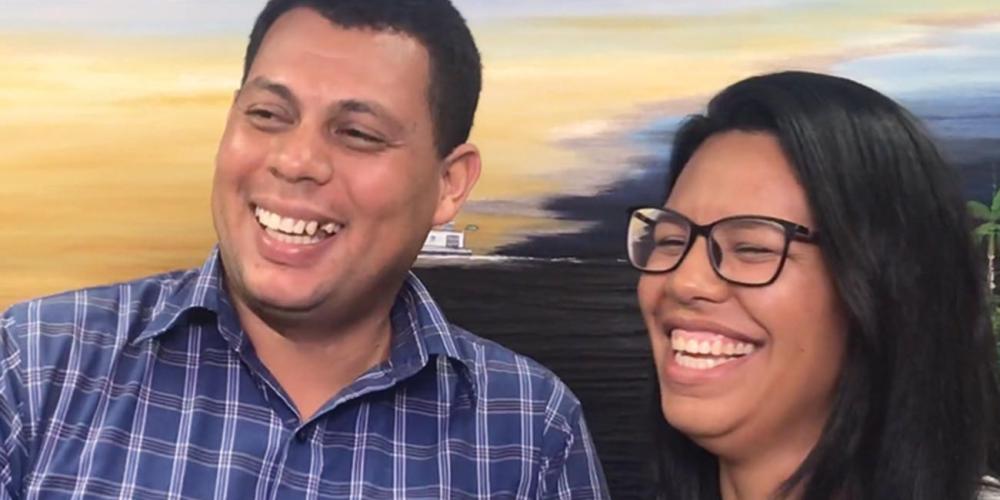 As the meetings entered their second week, Reno and Natalia grew weary.

The hot Amazon sun made their work exhausting.

Pastor Reno and his wife, Natalia, docked their boat at the remote Brazilian village of Democracia and knocked on the doors of every home to distribute invitation cards to evangelistic meetings.

Then the missionaries walked 45 minutes along a muddy road to another village, where they also visited every home. Three Bible workers helped them by visiting homes in two other villages.

The missionaries did this every day during the month-long evangelistic series at an open-air community center in Democracia.

People flocked to the meetings, many riding in the back of three rented battered pickup trucks secured by the missionaries. Other people walked. But few Democracia villagers joined the daily gathering of 150 people.

As the meetings entered their second week, Reno and Natalia grew weary. The long morning walks and the villagers’ apparent indifference discouraged them.

Some people grumbled that the couple resembled door-to-door salespeople with their daily visits.

Others looked suspiciously at a rising Adventist church building that Reno had hired workers to construct. The villagers belonged to a single Sunday denomination, and they spoke with worry about how families had been split in a neighboring village when a rival Sunday denomination had entered that community. They didn’t want division in Democracia.

After one particularly tiring day, Reno and Natalia collapsed on their boat.

“Why are we here?” Reno said. “The field doesn’t appear to be ripe. It seems like no one will accept the Bible.”

“I don’t want to do this work anymore,” Natalia said. “I love this work, but they aren’t accepting the truth.”

In despair, Natalia opened the Bible app on her cell phone and pressed a button to randomly choose a verse. “Please God,” she prayed. “Show us why we’re here.”

Galatians 6:9 stared back at her, reading, “And let us not grow weary while doing good, for in due season we shall reap if we do not lose heart.”

The next day, a middle-aged woman cried out with joy when Reno and Natalia stopped by her home with an invitation card to the evangelistic meetings.

“That’s my church!” she said, pointing to the Adventist Church’s Hope Channel logo on the card. “This has been my church for four years, and I want to be baptized.”

The missionaries learned that the woman had watched Novo Tempo television, the Brazilian affiliate of Hope Channel, for the past four years and prayed for a preacher like those on the channel to come to her village.

The woman was among 50 people baptized when the meetings ended in December 2017.

Also baptized were two sisters, Franciene, 19, and Delciene, 16, who began attending after the missionaries read the Bible promise. The sisters’ parents forbade them from going to the meetings, but they went anyway.

“Our father doesn’t accept our faith, and he didn’t want us to be baptized today, so we came by ourselves,” Franciene said in a video recording that Reno made on the day of the baptism. “Grandmother came to our home last night to talk with him. He said that if we got baptized, he would beat us. But even if our family doesn’t accept our faith, we still want to be with Jesus.”

As he listened to the sisters speak about their newfound faith, Reno remembered his own discouragement just weeks earlier.

“I thought about how I said no one would accept the Bible,” he said. “But God was working on their hearts.”

The villagers, who had worried that a new church might create a rift, ended up changing their minds.

“Wow, this is a different kind of church,” said one.

“You care for us and don’t want to divide the community,” said another.

The boat — which has a meeting hall with air conditioning, a projector and sound system, and seats for 150 people — travels to remote villages along the Amazon River. While an especially muddy shoreline made it impossible to use the boat for the Democracia meetings, the boat was used for the other evangelistic series.

After Democracia, Reno and Natalia, both 32, are convinced that discouragement has no place in the Adventist work.

“The Lord does everything, and we are only the tools to guide people to Him,” said Natalia, who quit her job as a lawyer to become a missionary. “I thank the Lord every day for our work.”

The couple expressed gratitude to church members around the world for contributing to the purchase of the boat church through the Thirteenth Sabbath Offering in fourth quarter 2016.

“Villagers are waiting for missionaries and waiting to know Jesus,” Natalia said. “Jesus only needs one person who is willing to say, ‘Here I am, send me!”


For photos to share with this and other mission stories, visit the Facebook page for Mission quarterlies


For this and other mission stories, download the adult and youth Mission quarterly (PDF)