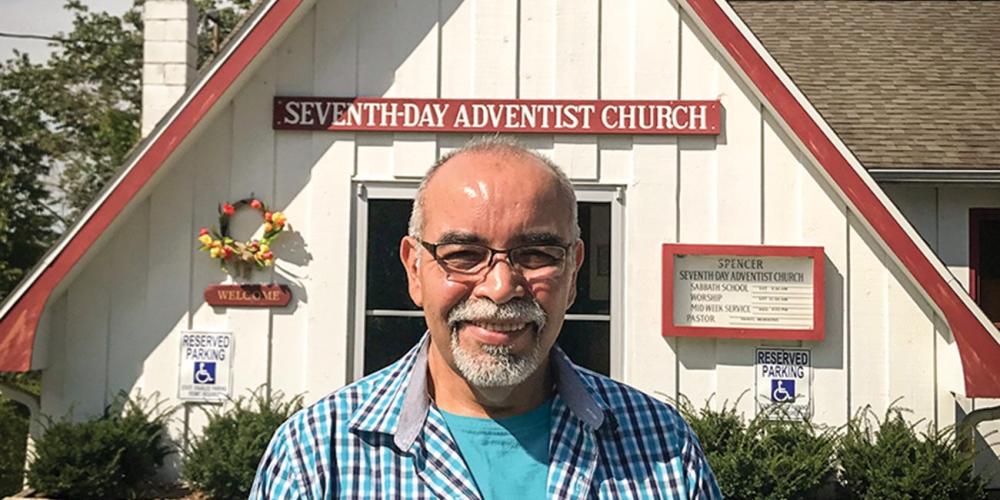 To Sabbath School teachers: This story is for Sabbath, May 26. Click here for photos to share while telling the mission story.

One evening, a technical glitch disrupted operations at the gas station where John Peña [pronounced: PAIN-ya] was working in the U.S. state of West Virginia.

The timing couldn’t have been worse.

Business was booming at the gas station’s 23 pumps in the town of Mount Hope, but now credit cards could no longer be accepted, only cash. Making matters worse, the gas station’s automated-teller machine stopped dispensing cash.

John and a female co-worker watched as a big Cadillac pulled up at a pump and its owner, a well-dressed black man, filled the tank. Moments later, the man entered the gas-station store.

“Sir, you owe $40 and you need to pay for your gasoline in cash,” John told him.

The man looked dismayed. “All I have are credit cards,” he said, speaking with an accent that John couldn’t place.

John spoke with his manager, who suggested that the customer leave his car at the gas station while he went to get some cash. The customer said, however, that he didn’t have any way to get cash that evening. John sensed a goodness about the man. So, he said, “I’ll pay for your gas. Leave your license, and I’ll return it when you pay me back.”

The man gratefully shook John’s hand. “I’ll be back tomorrow,” he promised.

After the man left, the co-worker looked at John as if he had lost his senses. “You’re going to lose that money,” she scolded him.

“I believe he will come back,” John said.

The next day, the man walked in with the $40. “Is there anything I can do?” he asked as he handed over the money.

John didn’t want a reward or any extra money. “No, we’re good,” he said. “God bless you. Have a great day.”

That evening, John shared the unusual experience with his wife, Sharon. But he promptly forgot about it when his father-in-law, Jim, stopped by to discuss the Bible. Jim was a Seventh-day Adventist and had been inviting John to visit his church for some time. Learning that evening that John wasn’t scheduled to work the next Saturday, Jim renewed the invitation. John relented. “OK, I’ll go this time,” he said.

John was born in a Sunday-keeping home in Cleveland and had attended an Adventist church a few times with his wife, who was raised Adventist but had left the church.

On Sabbath morning, John sat awkwardly beside Jim at the church in Beckley, West Virginia, waiting for the service to begin. After a few minutes, the pastor walked in the back of the sanctuary, and Jim said, “John, I really want you to meet the pastor.”

“Sure, I have some Bible questions to ask him anyway,” John said.

As the pastor walked up the aisle, John thought, “Do I know him from somewhere?”

The pastor shook Jim’s hand and then looked at John, puzzled. “Do I know you from somewhere?” he said.

The two men stared at each other for a moment. Then John exclaimed, “You’re the guy at the gas station!”

“Oh!” the pastor said. “You’re the guy who paid for my gasoline!”

After the church service, John and pastor Samuel Simuzoshya, a native of Zambia, explained to Jim how they had met.

Rest of the Story

The encounter with the Adventist pastor left a deep impression on John. He started to attend Sabbath church services at Beckley and, later, at an Adventist church in Spencer, which is closer to his home. His wife was baptized.

The Spencer church, which has about 30 members, used its portion of the money to rent a large public hall for two weeks of evangelistic meetings led by one of its elders, William Iannacone. John joined church members in distributing literature and doing home visitations during the evangelistic campaign, but he did not go up to request baptism at the end of the meetings.

Two days before the baptism of two people from the meetings, the church’s pastor, Daniel Morikone, visited John at home to ask what was keeping him from being giving his heart to Jesus.

“I look at other people who are conveying the character of Christ and I don’t know if I’m clean enough,” John told him.

“If you keep looking at others and not at Christ, you will never want to be baptized,” the pastor replied.

The words cut John to the heart. The next day, he called the pastor and asked, “What do I bring to be baptized tomorrow?”

John was baptized with the others.

Reflecting on his path toward baptism, John said he was won over by seeing Christ’s goodness in church members. John, 57 and now a deacon at the Spencer church, hopes to bless his community in a similar way.

“I have lived here for 30 years, and people know me,” he said. “They see how I have changed after my conversion. I want to reach this community.”

John Peña, who was baptized after a Thirteenth Sabbath-funded evangelistic meeting, says the goodness in several Adventist pastors attracted him to the gospel. (Andrew McChesney / Adventist Mission)