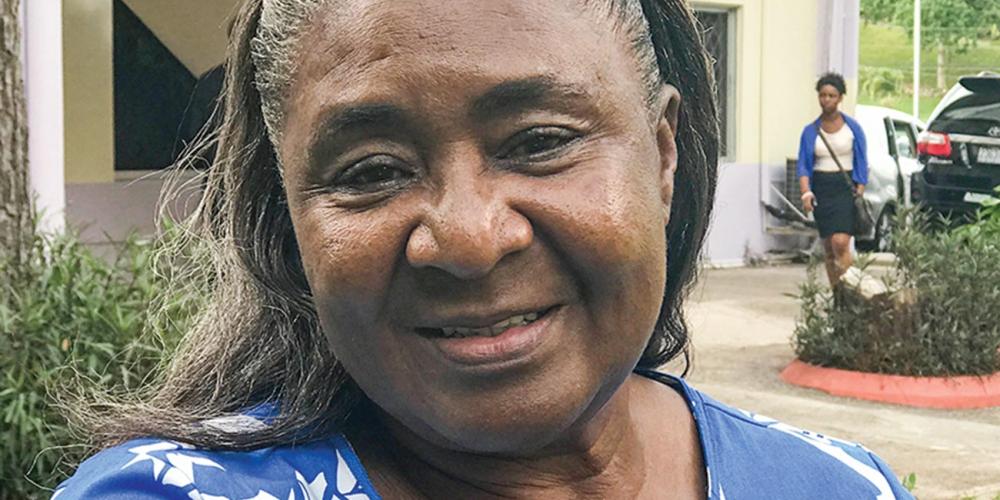 Mavis wanted to be baptized but Saturday was her busiest day at work.

To Sabbath School teachers: This story is for Sabbath, March 17. Click here for photos to share while telling the mission story.

Mavis Burrell Spencer wasn’t sure what to do with her husband’s high-end tailoring business when he died a decade ago.

Her husband had established three, flourishing tailor shops in Jamaica, including a main outlet with 25 employees in a shopping center in the island’s capital, Kingston.

Mavis saw that she was at a crossroads, and she ultimately decided to run the business by herself.

Ten years later, Mavis found herself at a crossroads again. She wanted to be baptized into the Seventh-day Adventist Church, and Saturday was her busiest day at work. She prayed earnestly about what to do.

Mavis, who had attended a Sunday church on and off, first heard about the seventh-day Sabbath from Adventist friends. But she didn’t know that the Fourth Commandment to “remember the Sabbath day to keep it holy” applies to all Christians today.

Things began to change after a family friend invited her to weekly Bible studies. The friend, an Adventist business owner, had prayed regularly with her husband before he died, and Mavis had turned down his earlier invitations to attend church, saying she was too busy. But then he invited her to the small-group Bible studies and called her every week to remind her to come.

Mavis was astonished to discover how little she knew about the Bible.

“Everything began to open up to me in the Bible,” Mavis said. “I said at one lesson, ‘I didn’t know all these things were in the Bible!’”

In addition to the Sabbath truth, she didn’t realize that Jesus was coming soon and would take the righteous home. She was amazed by the Bible’s description of the New Earth.

But she continued to operate her tailor shops on Sabbath. Then one evening as she drove home from the Bible study, she felt like a voice was telling her, “You can run, but you can’t hide.”

Mavis began to pray earnestly about the Sabbath.

“I was not fully accepting what I was learning,” she said. “I believe that the Lord was saying to me that I was running away from Him but I couldn’t hide, no matter what happened.”

In December 2016, she made her decision. She posted a notice on the doors of her three shops that read, “Effective January 7, Spencer’s Tailoring Establishment will be closed on Saturdays.” Instead, the shops would be open on Sundays.

Mavis was baptized on January 7.

Several clients complained angrily about the shops being closed.

“How could you do this?” said one.

“Saturday is the most productive day, so why are you closing?” said another one.

Mavis replied patiently, “My Father in heaven tells me that 1,000 cattle on the hills belong to Him, so it is nothing for Him to give 10 of them to me.”

“My sales are going up,” Mavis said. “A lot of people who usually came during the week or on Saturday have found it more convenient to come on Sunday. They like not having to wrestle for parking.”

Even more important than money, Mavis said, is the reality that she has gained a new family at church. She will long remember the warm reception that she received when she first went to church on Sabbath.

“It was like a gate opened,” she said. “Everyone rushed at me. I can’t believe that people are so loving and so kind. I have never been so happy in all my life.”

These days, Mavis, who is 66, prays with her staff before opening every morning. She asks God to bless the customers and to give the staff strength and love for one another. She said her employees used to argue and compete, but now a sense of calm and unity has come over her business.

She also has invited employees to attend the small-group Bible studies, and one of them is preparing for baptism.

Asked what advice she has for business owners thinking about keeping the Sabbath, she said, “You have nothing to lose. You only have to gain when you give it all to the Lord.”

Her favorite Bible verse is Philippians 4:13, which says, “I can to all things through Christ who strengthens me” (NKJV).

“Keep your eyes on Jesus because He is the source of life,” she said. “Without Him, you have nothing. With Him, you can do everything.”

Mavis Burrell Spencer, 66, shares why she keeps the Sabbath in Jamaica. (Andrew McChesney)