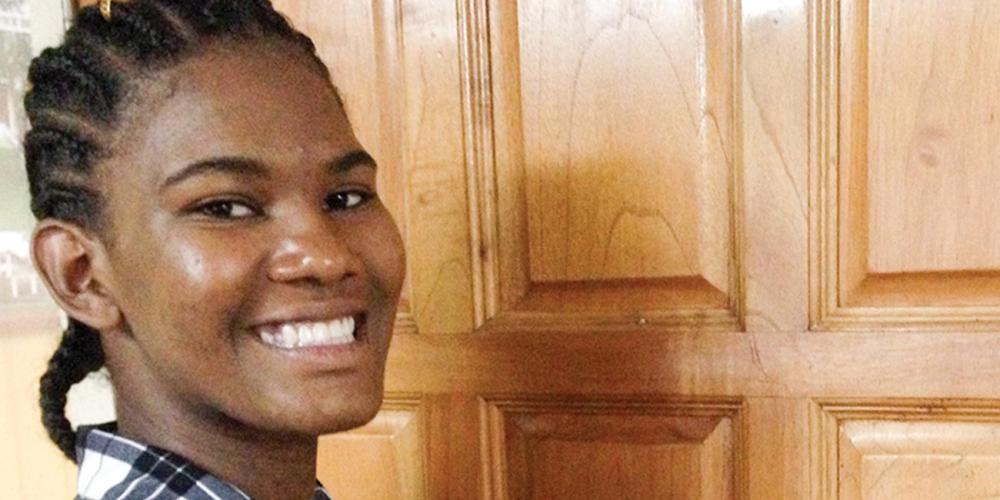 “I still think you’re an angel! Thank you for the awesome books.”

To Sabbath School teachers: This story is for Sabbath, March 10. Click here for photos to share while telling the mission story.

[Ask a young woman to read this first-hand testimony.]

Dozens of students from the University of the Southern Caribbean in Trinidad and Tobago go door to door selling books every summer to pay tuition fees. Many of those students work in the Caribbean, but I joined a group of 10 students who flew to Canada.

I arrived in Ponoka, a town in the province of Alberta, and was paired up with a student from Romania who spoke little English. We each took one side of the street on a rainy Friday. After several hours, I could see the frustration in his eyes.

“Do you need help?” I asked as we headed to our last street for the day.

He shook his head. We prayed and set out to finish the street.

At the first house, a man slammed the door in the Romanian student’s face. For some reason, I found it funny and laughed. Then I saw how sad my companion looked, so I apologized and said, “Let’s do one door together.”

We went to his side of the street, prayed, and approached the next house. I knocked on the door and received an immediate response: the fierce yapping of a small dog. Dog owners don’t like it when their pets bark loudly, and they usually refuse to buy books. Sure enough, the woman who opened the door didn’t look happy to see us. The scruffy dog at her feet also wasn’t happy, and it continued to bark.

I tried to pay no attention to the dog and held out a health book called Plants That Heal. As I spoke, it struck me that this woman was about to reject me because her dog wouldn’t be quiet. So, I said to the dog, “Scruffy, what’s wrong? Why are you making so much noise? Is it because I am a stranger?”

The woman immediately asked, “Have you been to my home before?”

The question confused me. “No,” I said. “I have never been to this house before.”

“Then how did you know about Scruffy?” she asked.

I told her that I didn’t know her dog.

The woman invited us in. “Scruffy was the name that I gave my previous dog,” she said. “He died right on the spot where you were standing.”

Her words surprised me, and I expressed sympathy over her loss.

The woman asked what we were doing out in the rain. I smiled and I pulled out the book, Peace Above the Storm, a retitled edition of Ellen White’s Steps to Christ. I told her about the book.

Just when the woman was asking about the book’s price, her husband came home. I turned to him and said, “Sir, how are you doing today? I’m Shanelle. What is your name?”

The woman hugged me and asked where I was from. When I told her that I was born on the island of Saint Lucia, she burst into tears. “We’re going to Saint Lucia on our next vacation,” she said.

She asked me to tell her about the island as she looked for her purse.

“I don’t usually talk with salespeople at my door, but you have to be my angel,” she said. “You called my dog Scruffy by name, you are from the very island where I plan to go next, and your father’s name is the same as my husband’s. And you have a pleasant smile. Are you sure you aren’t an angel?”

I smiled and said I was quite sure that I was just Shanelle.

The woman bought both books and asked me to autograph them. I added a Bible promise beside my name in Peace Above the Storm. The woman held the book tightly against her chest.

As we left the house, my Romanian partner was amazed and said, “Shanelle, how did you do it? She was about to reject you, but instead you sold two books.”

I gave him the money and said, “It was God.”

As we continued down the street, the woman came out of her house and called out, “I still think you’re an angel! Thank you for the awesome books. I will share them with my daughter.”

I was so happy that I could have stopped canvassing right then and there. My goal was met for that day. I had reached one life for Jesus.

Shanelle Octave, 22, is an accounting major at the University of the Southern Caribbean in Trinidad and Tobago. Part of this quarter’s Thirteenth Sabbath Offering will help the university built its first church building. Thank you for supporting mission!