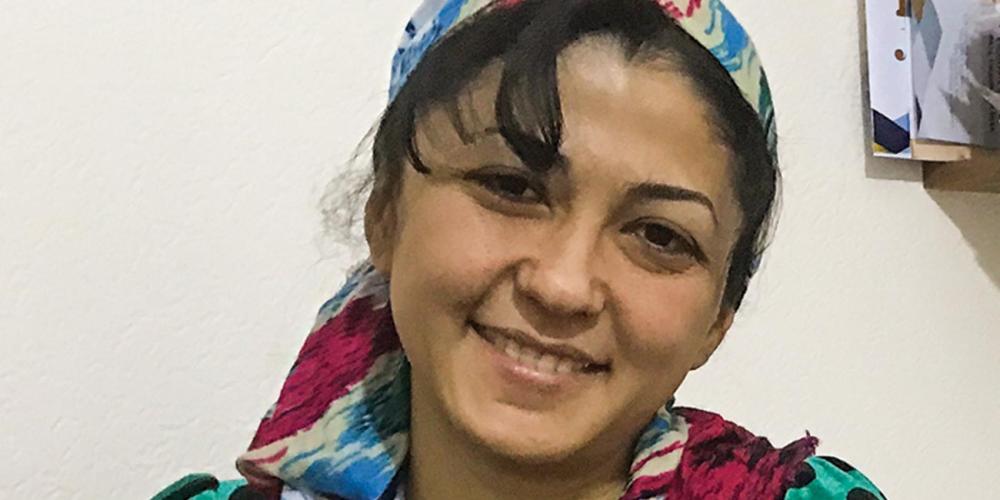 Surayo went inside and realized that this was exactly where God wanted her.

To Sabbath School teachers: This story is for Sabbath, Nov. 18. Click here for photos to share while telling the mission story.

As a teenager, Surayo [SU-rayo] worshipped with Seventh-day Adventists for two years at the invitation of a neighbor in Tajikistan. But when she was 18, she stopped attending and eventually forgot about God as she pursued a career in nursing. Then she got married. But marriage didn’t bring the happiness Surayo had hoped for. Her husband gambled and used drugs, and he often beat her.

During a moment of sadness, Surayo found the Bible that an Adventist had given her years earlier. She opened it at random, and her eyes fell on Isaiah 5:4. She read the verse several times. It said, “What more could have been done to My vineyard that I have not done in it? Why then, when I expected it to bring forth good grapes, did it bring forth wild grapes?” (NKJV).

Tears filled Surayo’s eyes. She sensed that she was the vineyard prepared by God, but she had failed Him. She prayed, “God, if I should stay with my husband, please make him stop beating me. And make it possible for us to worship You together. If You want me to leave him, provide a peaceful way to do it. I will follow You.”

Shortly after her prayer, Surayo announced to her husband, “I love someone else more than you. He is more than a person to me.”

Her husband interrupted triumphantly, “I knew there was somebody else!”

“You must love Mohammed,” the husband said. “He is our prophet, not Jesus.”

“The issue is not about who is a prophet,” Surayo said. “Jesus is more than a prophet. He is our path to salvation.”

A few days later, Surayo’s husband, high on drugs, lost a sizeable sum of money in a betting game. He decided that he would rather go to jail than to face the shame of not being able to pay his debt. So, he decided, while still high on drugs, that his ticket to jail was to kill Surayo. He invited her to go for a late-night walk.

The moon was so pretty that Surayo didn’t notice where they were walking. She was surprised to find that they were in a cemetery. Then she felt something sharp and cold on her neck—a knife! Her husband was trying to slit her throat!

Surayo grabbed his arm. “Why are you trying to kill me? It’s not worth going to prison for me.”

The couple struggled, and several of Surayo’s fingers were cut to the bone. “Jesus, save me!” she cried out. “Stop him!” Then she lost consciousness.

She awoke in her own bed a few hours later. Her husband told her that he had brought her home.

Surayo immediately told him that she could not live with him anymore. He did not resist, and the couple parted ways. It had been a week since Surayo had promised to follow God if He helped her get a peaceful divorce. But she forgot her promise to follow God.

Surayo rented an apartment and found a job as a nurse working the night shift at a hospital. Then she remembered the promise. She began to pray, “If you want me to follow You, tell me which denomination to join. Which church is the real one, the one where You are?”

One Saturday morning, after a long night at the hospital, Surayo unintentionally got onto the wrong bus. She didn’t realize her mistake until the bus reached its last stop. She looked around, trying to get her bearings. Then she saw an Adventist building in front of her. She realized that getting on the wrong bus was no accident; God had brought her to where the Adventists were worshipping.

It was Sabbath morning, and worship services were just starting. Surayo went inside and realized that this was exactly where God wanted her. She has never left.

Part of this quarter’s Thirteenth Sabbath Offering will go toward outreach programs in Tajikistan, a country of 8 million people but only 204 Adventists. Thank you for remembering Tajikistan in your prayers and with your Sabbath School mission offerings.

Read more about Surayo here and a children’s story about her on p. 22 of the Children’s Mission quarterly