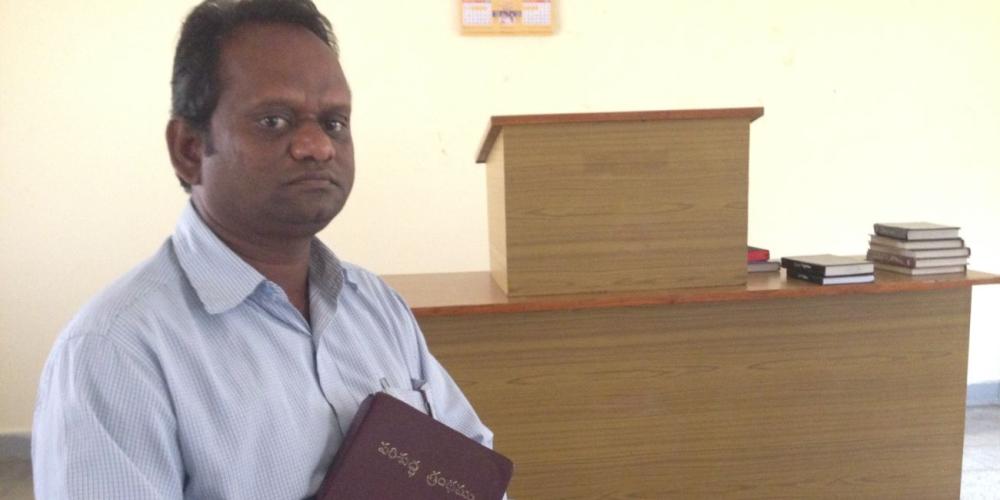 Chadamla was worried that his marriage was falling apart. He was beating his wife several times a month, and he couldn’t seem to stop.

To Sabbath School teachers: This story is for Sabbath, July 8.

Chadamla (pronounced: chah-DAHM-lah) stopped outside the Seventh-day Adventist church in his town on a Sabbath morning.

His life was not going well.

He made good money driving a three-wheeled taxi. But he was worried that his marriage was falling apart. He was beating his wife several times a month, and he couldn’t seem to stop.

He heard the pastor’s voice from inside the church and stopped to listen.

The pastor was telling the Sabbath School class about Jacob.

He described a ladder of angels stretching into the sky and told of Jacob’s pledge to give 10 percent of his income to the Lord in exchange for blessings.

After the Sabbath School class ended, Chadamla entered the church and asked the pastor where the story he had told came from.

The pastor gave him a copy of the adult Sabbath School lesson quarterly and a Bible.

The beatings began about three months after Chadamla, who was 22 years old at the time, married his 18-year-old wife. Both he and his wife had deep roots in their traditional religion.

Chadamla was named in honor of the god of the wind. His wife was named after a traditional goddess.

Even before they were married, Chadamla’s wife had known that she had been chosen by the spirits.

She would become possessed by spirits during religious rituals, losing control of her body, dancing, and tearing her clothing.

Villagers invited her to attend spirit meetings in their homes.

When she was in a trance, they could seek advice from the spirits, and she would speak.

Although he considered himself faithful to his religion, Chadamla strongly disliked his wife’s participation in the spirit meetings.

He was particularly disturbed by how each spirit meeting ended; his wife would leave the home where the ritual had been held and dance wildly in the street on the way to the nearest shrine, where she would sacrifice a rooster or small goat. The sacrifice would leave her face and clothing splattered with blood. Shortly after the sacrifice, she would come to her senses and return home.

“I didn’t like to see my wife possessed. I would yell at my wife and beat her, telling her not to go any more.”

He felt bad after each beating, but he couldn’t stop himself. Only later did he realize that the same evil spirits that possessed his wife were manifesting themselves in his actions as well.

“I did not know that it was the devil’s spirit that was provoking me to beat my wife,” he said.

“But after reading the Bible for some time, I realized that the spirt of arrogance is from Satan.”

His wife glared at him during the beatings and she snarled defiantly, “Who do you think that I am that you are beating me?”

Sometimes she fled to her parents’ house until Chadamla had calmed down.

But she always returned, and she continued attending the rituals.

Twice she suffered miscarriages during the rituals.

That’s when Chadamla walked by the Adventist church near his home.

He heard the pastor’s comments about Jacob and wanted to know more. Chadamla had no idea how much that meeting would change his life.

Part of this quarter’s Thirteenth Sabbath Offering will help finish building a training and conference center about 20 miles [30 kilometers] from Chadamla’s home in central India.

This will be the first major training and conference center in the entire Southern Asia Division. It will be available for use by local church members such as Chadamla, and pastors and lay workers from around the division.

Please remember this project and the Adventist work in central India in your prayers and with your Sabbath School mission offerings.