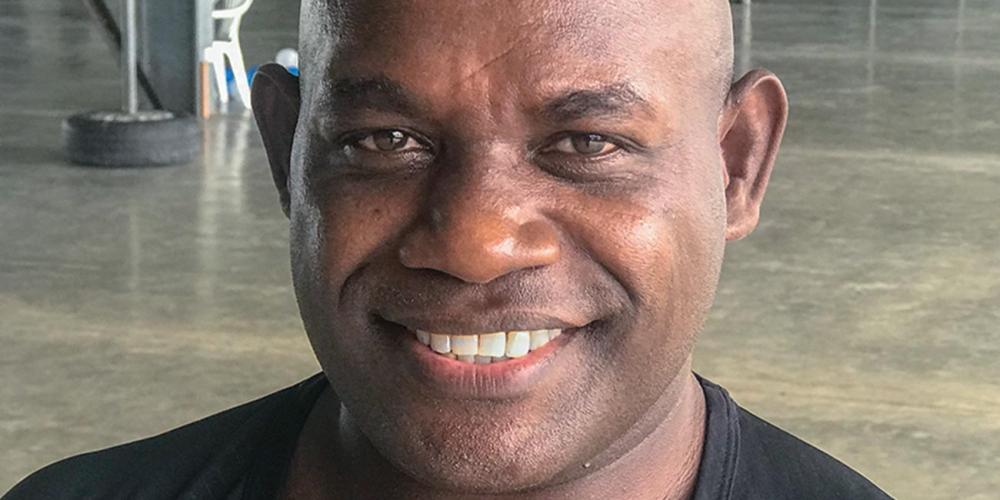 Herik Dun Siope grew up fit, but then he gained a lot of weight.

To Sabbath School teachers: This story is for Sabbath, July 27.

Herik Dun Siope, who grew up in a Seventh-day Adventist home, was flying high as a martial arts expert in the Solomon Islands.

But then he got busy with work as an architectural drafter. He married and had four children. He rarely read the Bible or went to church. He stopped physical training and ate a lot of easy-to-fix processed food like fish and chips, chicken, and Coca-Cola. Eleven years passed, and Herik grew and grew until he reached 230 pounds (105 kilograms), far above his ideal weight of 145 pounds (65 kilograms).

One day, Herik’s left foot began to ache dreadfully. Over the weeks, the pain crept up his leg. He sought medical treatment, but nothing helped. Finally, he couldn’t walk.

Herik grew frantic. He knew no blood was circulating in his leg, and he worried that he would lose it. He remembered God.

“Help me find medication,” he prayed.

Shortly after he prayed, an elderly relative knocked on his house door in Honiara, capital of the Solomon Islands. The relative said he had felt a strong impression to visit and asked Herik why he couldn’t walk. Herik told about the pain and lack of medication.

He prepared a home remedy and treated Herik daily. After three weeks, Herik could stand, but he couldn’t walk.

“You’ve lost the muscle in your leg,” the old man said. “You need to exercise your leg.”

Herik thanked God for the healing and prayed, “God, I want You to use me. I want to be a blessing to others. Show me what Your plan is for me.”

After praying, Herik felt convicted to lose weight. He was sleeping poorly at night and suffered back pain. When he walked, he had trouble breathing. He knew that his leg pain had been connected to his weight.

But how to lose weight? Herik remembered Ellen White’s book “Counsels on Diet and Foods” and began to read it. He was amazed as he learned that appetite brought sin into the world. He read, “As our first parents lost Eden through the indulgence of appetite, our only hope of regaining Eden is through the firm denial of appetite and passion” (page 59).

Herik made major changes to his diet. He stopped eating processed food and, after a fierce struggle, eliminated caffeinated drinks. He also stopped using sugar and dairy products. Instead he returned to God’s original plant-based diet of fruit, vegetables, grains, and nuts. He also tried not to eat after 4 p.m. and took care not to overeat.

In addition, he began to exercise, first by walking daily and then also by learning simple workouts that he could do at home.

In 12 months, he lost 90 pounds (40 kilograms) — and was back at his ideal weight. He felt healthier and could do chin-ups and other exercises that he hadn’t managed to do even when he engaged in martial arts.

Today, two years later, Herik is 46 years old and leads free fitness classes for overweight islanders in an Adventist-owned auditorium. More than 200 people of various faiths come to him to work out four days a week. He also provides seminars at the country’s Health Ministry and works with private companies. His advice comes straight from Ellen White — and he says people are losing weight and feeling great.

“I realize that this is how God wants to use me, and it has strengthened my spiritual life,” Herik said. “I thank God for the blessing that He has given me, so I can be a blessing to others in this small way.”

Part of this quarter’s Thirteenth Sabbath Offering will support “Save 10,000 Toes,” a project to fight diabetes on the Solomon Islands. “Save 10,000 Toes” — which refers to the amputation of the toes of diabetic people — started in December 2017 and finances Herik’s community exercise program. Thank you for your Sabbath School mission offerings.