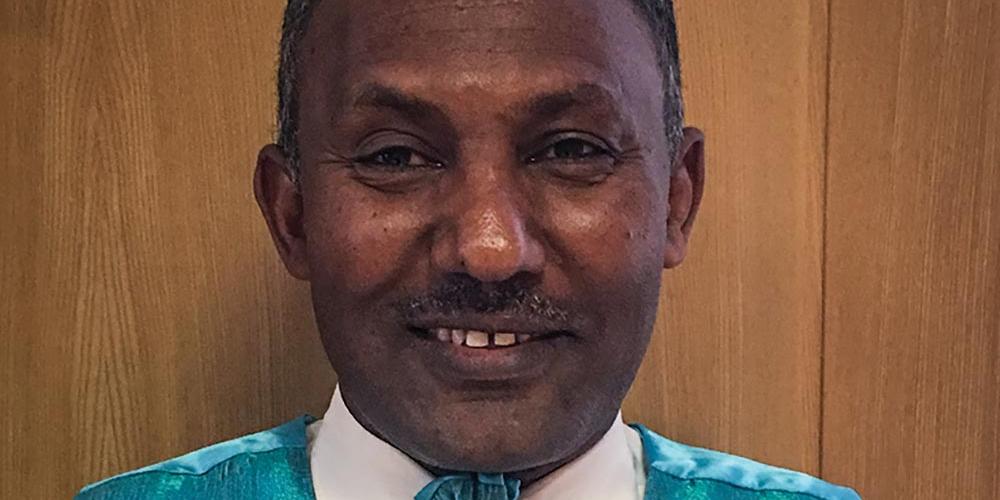 When asked how he was able to bear it, Moalign responds, “Ask Jesus. I really don’t know. I was praying.”

As we learned last week, the historic Bethel Seventh-day Adventist Church in Oslo, Norway, is vibrant and active. In addition to its native Norwegian members, the church has embraced numerous immigrants as part of its family.

One such person is Moalign [pronounced MOE-a-line] Hailu. Growing up in Ethiopia, Moalign suffered much for his faith, as did his father before him.

“My father was one of the early Adventists in Ethiopia,” explains Moalign. “During that time (1940s/50s) Adventists were called ‘Anti-Mary.’” Moalign’s father was put in jail where he was frequently beaten. But God did miracles for him, says Moalign. “When they chained his legs, the new chain broke in pieces! They took another new chain, and the same thing happened again!”

Encouraged by this story, Moalign’s faith was strengthened to face similar circumstances at the young age of 16. At that time (1978 to 1991), socialism had entered Ethiopia, and the Soviet-style government was pushing atheism.

He explains some of the challenges. “Everyone had to proclaim the slogan: ‘There is no God!’ I was in high school at the time, and we were all supposed to attend political meetings on Sabbath.”

When Moalign and two other Adventists refused to proclaim the slogan or attend the political meetings, the other young people beat them mercilessly. They were taken to prison where officials instructed the young prisoners in Marxism.

“They wanted me to curse God and step on the Bible,” Moalign remembers. They told us, “Religion is the opiate of the people. You must work on Saturday! Who are you?! Other Christians work on Saturday—they work for social development. We are struggling to forward our country’s growth, and you are an obstacle! You are teaching other young people to be affected by this religion!”

As his father did before him, Moalign suffered beatings and torture while in prison. “They hit me with the gun butt, slapped me, kicked me—this was normal,” he says. But sometimes, there was a “planned program.”

“They would come drunk, so they wouldn’t have any compassion,” Moalign remembers. “They would tie you together and then either hang you, or put your legs up on a chair, tied to it. Then they would beat your feet with electric wires and leather straps.”

When asked how he was able to bear it, Moalign responds, “Ask Jesus. I really don’t know. I was praying.”

After Moalign was in prison for a year, his father was allowed to visit. “I’m so proud to see such a son who can dare to stand for Jesus,” he said. “Now that you have started, don’t look back.” Then he confided, “We won’t see each other again. When you hear that I died, don’t cry—you don’t need to disturb your mind. I will rest in the Lord, and we’ll be there” he said, pointing upward.

After seven years of imprisonment, Moalign and the two other faithful Adventists were called to the regional administrative headquarters where officials tried to give them the death sentence.

“But somehow, God intervened,” says Moalign. “They tried to intimidate us, telling us that we were going to be killed, but it didn’t happen.”

Later, the administrator told the young men, “you imprisoned yourself. You could have been free a long time ago. Now in one way, I appreciate it—you are so strong in your faith. You suffered seven years for your faith!”

Then the man told them, “You’re going to be freed because the Ethiopian people are now civilized. No one will accept your propaganda, your preaching. You are just a drop in an ocean, so that’s why we’re releasing you!”

“You say that,” Moalign replied, “but it’s not because the people are civilized or you are being kind to us. It’s from above, and the time is over. The Lord had a plan for us, why else would we have gone to prison? You have given us the privilege of spreading the gospel in this dark place.”

After being released at the age of 23, Moalign returned to high school and later studied theology at the Adventist University of Eastern Africa, in Baraton, Kenya. After returning to Ethiopia, where he served as the youth and stewardship director, Moalign was called to serve Adventist Ethiopians living in London, England. After a time the Ethiopian Adventists in Norway invited Moalign to join them in Oslo. He currently serves this group of approximately 50 as a volunteer lay evangelist as he earns an income by working in a nursing home.

In addition to encouraging the Ethiopian Adventists who are part of the fellowship at the Bethel Adventist Church in Oslo, Moalign has a burden to reach out to the approximately 3,000 Ethiopians currently living in Norway today.