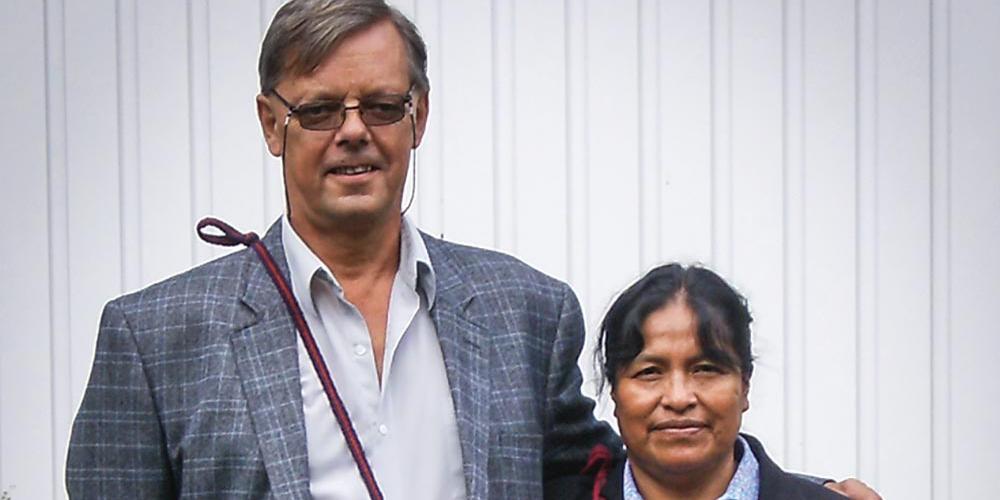 From Atheist to Adventist

God changed me. Before I wasn’t interested in reading the Bible, but now I can’t go a day without seeking His words and listening to what He has to say.”

God must have a sense of humor,” says Torgeir (pronounced Tor-GUY) of Norway. “My wife Cayetana (pronounced Kay-TA-na), who had been widowed for several years, prayed for God to send her a man with whom she could share her faith and who could help raise her young son. Instead He sent me—an atheist!”

Torgeir had previously been married to a Norwegian girl with whom he had three children. However his lifestyle caused their marriage to deteriorate, as he was drinking every day. He would drink a bottle of liquor and then go out to find friends who shared his habits. In spite of being a self-declared atheist, he began to realize that he was living far from God and he had to do something about his life.

At Christmas time, as was his family tradition, he was decorating the Christmas tree with his three children. He drank the entire day but finally came to his senses enough to ask himself, “What am I doing?” He knew he had to make changes.

All of his life he had been fascinated with the Inca Indians of Peru and their culture. It was his dream to go see their ruins and to learn more about Peru. In 2002, he was able to take his dream trip and he fell in love with the country and people.

Then back in Norway he began tutoring a young Peruvian boy. The boy wanted to go back to Peru to visit his grandfather, so he and Torgeir made the trip which cemented the man’s love for the country.

Torgeir came back to Norway and began studying Spanish, for he knew he wanted to return to Peru. One day in 2003, he was walking around observing the atmosphere in one of the Peruvian cities which was on his list to visit. He became hungry and wandered into a restaurant. It was God’s plan; it was Cayetana’s restaurant. Torgeir smiles when he repeats the old proverb, “The way to a man’s heart is through his stomach.”

He did not travel to any of the other cities on his list, but stayed right there and eventually met Cayetana’s family, who were Seventh-day Adventists and leaders in their churches. Torgeir visited Peru three times in 2003 and the last time he applied for a visa for Cayetana to come to Norway to marry him.

When Cayetana first arrived in Norway, Torgeir called the Adventist church in Oslo to learn its location and the times of services. He thought he should go to church with his wife the first few times until she made friends and felt comfortable there.

Torgeir says he had a good experience at the church and little by little God was silently working with him.

“One day Cayetana noticed that I knelt down for prayer at church,” he recalls. “But I know that God started working with me long before that. About five or six months after my divorce I threw away my cigarettes and stopped drinking. I had tried to give these up before, but this time God took the desire away. I believe God started to change my lifestyle years earlier to prepare me for coming to church.”

He had never owned a Bible, and nothing about God interested him, but he says, “Now I can’t go a day without studying the Bible. I read it in three languages to compare—several versions in Norwegian, English and Spanish. God changed me. Before I wasn’t interested in reading the Bible, but now I can’t go a day without seeking His words and listening to what He has to say.”

After attending the Adventist church in Oslo for about six months, the pastor asked Torgeir if he would like to study the Bible with him, and Torgeir accepted the invitation.

“We studied together for some months,” recalls Torgeir, “and it was almost like I was expecting another question, and that question came: ‘Do you want to be baptized?’ I was ready! I was baptized April 1, 2006 in the central church by Pastor Tito. My wife was re-baptized at the same time. It was a great day!”

Torgeir says that his conversion was a quiet thing. He simply listened to sermons, studied the Bible, and absorbed the Holy Spirit’s leadings. He willingly came in, sat down and listened. He could have left at any time. No one confronted him or told him that he had to join the church.