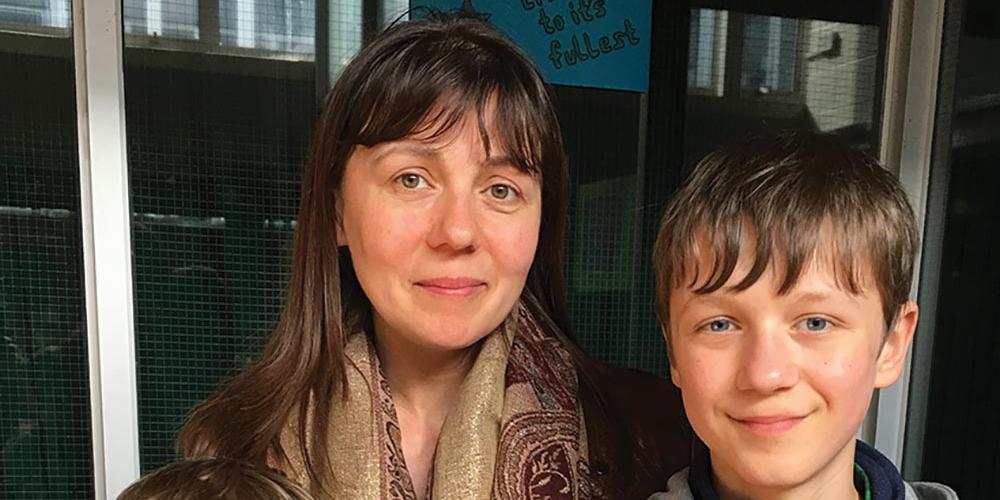 As a child someone gave me some books about Saturday, but our family believed that if it wasn’t from the Orthodox faith it wasn’t from God, so we burned the books.

Born in the country of Moldova, Tatiana came to Ireland at the age of 19—and eight months pregnant. In this first person account she shares her riveting story.

I grew up in an Eastern Orthodox family. My parents took me to church and taught me about God. I knew that when I prayed, He would answer.

As a child someone gave me some books about Saturday, but our family believed that if it wasn’t from the Orthodox faith it wasn’t from God, so we burned the books.

But I felt God drawing me and I wanted to read a Bible. Trying to get closer to Him, I found some icons and kept them, thinking they were holy.

I married young. Believing that life would be better in Ireland, we started planning how to get there. At just 19 years old, I didn’t realize how hard the journey would be. We first traveled to the Czech Republic and then to France. We stayed in Paris for six months, during which time I became pregnant. It was very difficult—living on the street, begging for food, and sleeping in shelters at night.

Then one night we snuck onto a train headed for England, but were evicted at the closest French town to England. We stayed in a camp that night, where we found large bags big enough to hide in. Then we snuck onto a freight train that was carrying olive oil! We hid inside our bags on that train for 11 hours! I was sweating, and my baby was so still I was afraid that he was dead.

When we realized that we were finally approaching England, we crawled out of our hot, stuffy bags. We had nothing with us—just our passports and a little money. Arriving in Dover, we were taken to the Red Cross where we were given a change of clothes.

Later, we bought bus tickets to Scotland, then Northern Ireland. Since both are part of the U.K., there was no passport control. The challenge was to get from there into the Republic of Ireland. Arriving at a town near the border, we walked all night across fields and gardens, quietly crossing into Ireland by sunrise.

Taking a train into the capital city of Dublin, we immediately requested refugee status. We were sent to the city of Limerick, and our son, Christian, was born that same week!

We stayed in Limerick for a year and a half, waiting to receive Irish citizenship. During that time, we made some friends who knew that we planned to move to Dublin. Before we left, they gave us the name and phone number of a couple they knew in Dublin. “Just call these people and you’ll have some friends there,” they said.

After receiving Irish passports, we briefly returned to Moldova. It was my first time to fly, and I cried the whole way. “Please God,” I prayed, “I promise that I’ll get a Bible and do everything in it! Just keep me safe.”

Arriving in Moldova, I bought a Bible. I also took my religious icons and other items, including some Moldovan food.

Back in Dublin, I called the number that our friends had given to us and invited the people over for a meal. It turned out that we lived in the same place—different buildings, but side by side!

The night before our guests came, I took my new Bible, sat down, and prayed. “God, this is the first time that I’m opening this Book. Show me the truth. Please show me what I need to do.”

The next day when our guests arrived, I put some Moldovan wine, salami, and other meats from Moldova on the nicely arranged table. As they approached the table, they said, “We’re sorry, but we don’t drink wine.”

Shocked, I thought, they must be from some strange sect! But then another thought came, “You promised you would do everything in my Word.”

“Because the Bible says it’s not good,” they responded.

“Can you show me in my Bible?”

“Of course,” they responded, and showed me the texts condemning alcohol.

“OK,” I said, as I put the wine in the rubbish bin. Then I invited them to eat something.

“Why? I asked. Then they showed me from my Bible.

“What church are you from?” I asked.

“We go to church on Saturday.”

“Why?” I asked once again, and of course, they gave me the answer from my Bible.

“May I come to your church?” I asked. I had promised God that I would follow the Bible.

That Sabbath I visited the Adventist church. After that visit, I never went back to the Orthodox church again. I had found the truth. Thank God that He brought me straight away to the Seventh-day Adventist Church.

Today, Tatiana and her children are members of an Adventist congregation that meets in a rented school hall in Dublin. They’re looking forward to having their own church building soon. Thank you for supporting them through the Thirteenth Sabbath Offering!