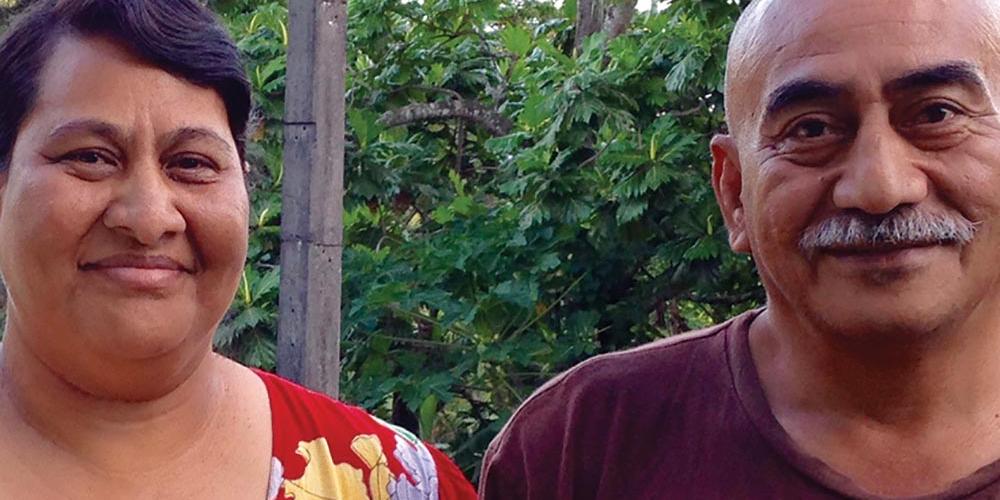 "So This Is Sabbath!"

“From the first Sabbath that we went to church there was a peace that I had never felt in my whole life,” said Ian. “I still experience that peace every Sabbath.

Eighty-five percent of Rotumans voted against opening their island to organized tourism.

About 10,000 Rotumans live on the main islands of Fiji, in New Zealand, and in Australia.

Ian Rigamoto and his wife, Lavinia, were born into staunch Methodist families on the tiny island of Rotuma—technically a part of Fiji but with a language and culture of its own. Like many Rotumans, the couple moved to Suva, the capital of Fiji.

There, Ian and Lavinia were active in the local Methodist church and were raising their children, Rozyln and Rosemary, in the faith. But the couple longed to learn more about the Bible.

One day Ian felt impressed to go into a video shop in Suva. There he found a series of DVDs on Bible prophecy by Seventh-day Adventist pastor Doug Batchelor.

Taking the series home, the family watched the DVDs and were soon convicted about the Sabbath. “We didn’t tell anyone anything,” Lavinia remembers, “but we were all convicted that we were worshiping on the wrong day. I told Ian, ‘If the seventh day is the right day, then we have to do something about it.’”

Deep In Our Hearts

“Deep in our hearts, we knew Sunday wasn’t the right day,” said Ian. “Our hearts were telling us to do the right thing. During family worship, the question always popped up—what about the Sabbath?” But Ian’s father lived with them, and they didn’t want to disappoint family or friends.

Ian, Lavinia, and their daughter Rozlyn continued attending the Methodist church, but their younger daughter, Rosemary, started going to the Seventh-day Adventist church. Often she reminded her parents of the Sabbath truth. The family struggled with their convictions for five years, sometimes praying and fasting as they asked God for direction.

Then unusual things began happening. “When we weren’t doing what we knew we should do, God started making the move for us,” Ian said. “We went through some hard times. We lost our house and had to move several times. I told Lavinia, ‘God is trying to tell us something.’ We were looking for an easy way to solve the problem, but God was saying, ‘Stand still and know that I am God.’ He was molding us for the transition to the Adventist Church, but we didn’t know it then.”

Then the Methodist pastor decided that some members could no longer serve in their positions, including Ian as a deacon. “I cried during the whole meeting,” Lavinia said. “Then I told myself that I shouldn’t be crying. Maybe this was the opening for us to leave.”

A Knock on the Door

Shortly after this experience there was a knock on the Rigamotos’ door. It was a woman named Theresa from the Adventist church. “She asked if we wanted to study the Bible, and we said ‘yes,’” Lavinia recalled. “It was so nice and interesting. We wanted to know more. I could see that my husband wanted to make the move, but his father was still with us. So we kept praying—‘Lord, please helps us to find a way.’”

Then one day, Ian’s father asked, “Please can I go to Rotuma? I’m tired of staying here.” They paid his airfare, and he was gone.

Just as Ian and Lavinia were convicted that it was time to keep the Sabbath, the Methodist head elder saw Ian at the market and said, “You’re supposed to be preaching this Friday—Easter Friday.” Ian felt conflicted—what should he do?

That evening Theresa came for their Bible study. The topic was on the close of probation. Feeling convicted yet torn, Ian told Theresa, “After I preach on Friday, then I’ll come.” But something inside him kept telling him, “It’s now!”

Ian wrestled with his convictions all night, and by morning he had found peace. Following family worship he announced, “After work today I’m going straight to the Methodist church to tell them thank you, but now we’re going to the Seventh-day Adventist church.”

That evening Ian fulfilled his promise. The head elder was speechless for five minutes. Then he said, “Oh, something must have happened for you to leave.”

“No,” replied Ian. “We fasted and prayed and asked God for the truth—and we have found it.”

That Sabbath Ian and Lavinia joined their daughter Rosemary in worshiping at the Seventh-day Adventist church. They were baptized, and started hosting weekly Bible studies in their home.

“From the first Sabbath that we went to church there was a peace that I had never felt in my whole life,” said Ian. “I still experience that peace every Sabbath. And we look forward to our Bible study group each Wednesday. I thirst for His word.”

Eighty-five percent of Rotumans voted against opening their island to organized tourism.

About 10,000 Rotumans live on the main islands of Fiji, in New Zealand, and in Australia.