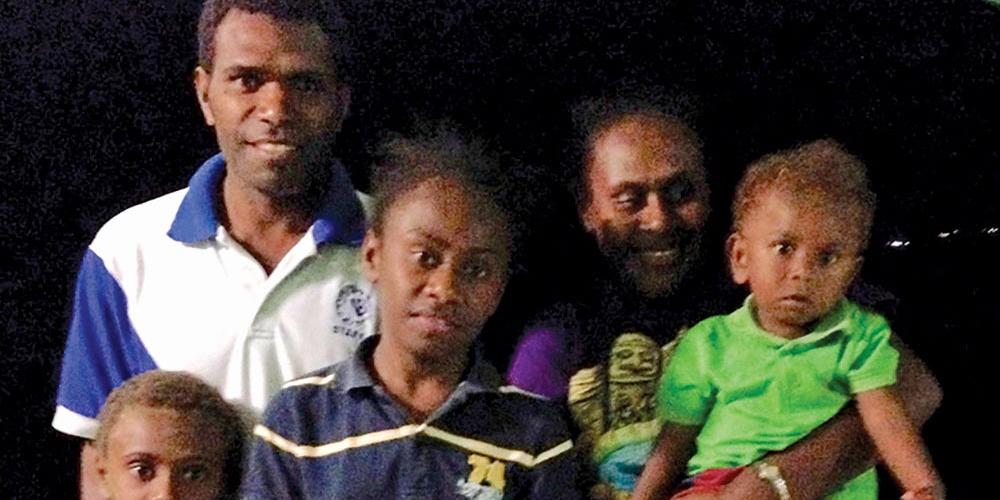 Then all of a sudden the pastor looked up and pointing straight at me said, “It’s you!”

Jean-Pierre came from a family with deep roots in the Presbyterian Church. Missionaries had come to his village in 1845, and sometime later a Presbyterian church was built—the first on the island. Jean-Pierre’s grandfather had been a missionary to the island of Futuna, 1,000 miles (1,600 km.) away. Everyone Jean-Pierre knew was a Presbyterian, and as an adult Jean-Pierre became an elder in his local church.

Then one day, Jean-Pierre’s world changed. While working in Vanuatu’s tourism and hotel industry he met Lana. As the two became close, Jean-Pierre learned that Lana was a Seventh-day Adventist. This was quite a shock for Jean-Pierre, especially the fact that Lana went to church on Saturday rather than Sunday. “It was like hitting a brick wall,” he recalled.

Although the two eventually decided to get married, spiritually it was a struggle, as Lana went to her church every Sabbath, and Jean-Pierre went to his on Sunday. “When it came to the Sabbath, I had to leave the house quietly, and with no disturbances,” said Jean-Pierre. “And on Sunday, she would leave the house.”

Jean-Pierre continued in his leadership role at the Presbyterian church, where he looked after the finances and preached regularly during the Sunday services. He also did leadership training.

Eventually Jean-Pierre and Lana had three sons, but they continued to live their separate spiritual lives. The boys worshiped with their mother on Sabbath, and Jean-Pierre continued to preach and lead out in his church on Sundays. But there was tension in the home that everyone could feel.

“Then a new window opened,” Jean-Pierre said. “My wife joined the Adventist Book Center [now known as the Hope Book Centre], where she became the manager. She would put some magazines on our table when I was preparing sermons. I enjoyed the magazines very much and found them helpful in my sermon preparation, not realizing that this was paving a way.

“When there were Adventist church functions, my wife invited me. I attended the Adventist men’s conferences, although I was still an elder in the Presbyterian church. I enjoyed these conferences very much, but still had this feeling that there was a wall in front of me that I kept hitting. In our home, there was Sabbath worship, and then Sunday. I could sense that something wasn’t quite right, and I needed to find the answer to it.”

Jean-Pierre struggled with the question of Sabbath and Sunday for some time before he finally found the answer.

In 2014, as part of the Mission to the Cities initiative of the General Conference, evangelistic meetings were held in Port Vila, the capital city of Vanuatu. The program, known as “PV14,” focused on reaching as many people in the city and surrounding areas as possible. A transportation committee was organized, and Jean-Pierre was invited to be the transportation director for his village. In addition to transporting people to and from the meetings each night, this meant that Jean-Pierre would also be attending the meetings.

During the first two weeks, Jean-Pierre was more focused on his transportation responsibilities, but by the third week his attention was arrested in a very startling way. He tells about it in his own words:

I sat down and looked up at the big screen. I was listening to Pastor Jean-Noel preach about the Sabbath—the very topic that had been troubling me all along. As I continued to listen and follow along in the Bible, I was convinced that this was the truth.

Then all of a sudden the pastor looked up and pointing straight at me said, “It’s you!” I looked around to see if anyone was behind me, but there was no one. He did it again, pointing— “It’s you, you that I’m looking at!”

I ignored him, trying to pretend it wasn’t me. I waited before looking up again, but when I did there he was saying, “Today, it’s you!” I paused, deciding not to look up at the screen again, but the moment I lifted up my head, he was still pointing at me and saying, “It’s you.” This time I looked at him with tears, and said, “Yes, it’s me.”

I made my decision. I’d been doing all these church things, but there was an inner feeling, something telling me, “This isn’t right.” I was convicted about the Sabbath, and accepted it. It was all I could do. I no longer felt this inner struggle and I experienced peace of mind. I knew that I had made the right decision to keep the Sabbath and be baptized as a Seventh-day Adventist. It reminded me of the story of Zacchaeus, when Jesus looked up into the tree and called him by name.