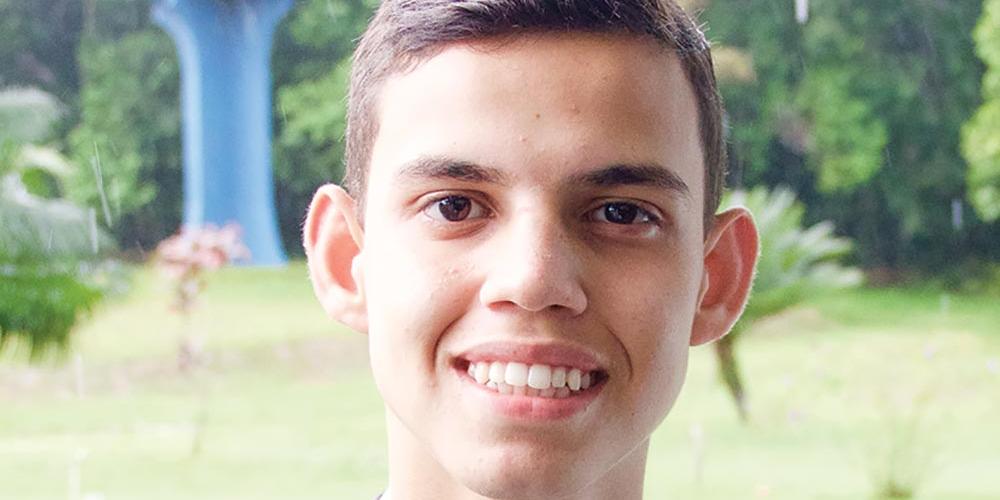 “Now I have my dreams completely, and I’m studying in an Adventist school,” said Michael. “Today I can say that I have peace.”

The story thus far: Michael was very depressed, and stayed in his darkened room except when he had to go to school. He was constantly on the internet until one day a thunderstorm broke the connection. Turning on the television, Michael found the Adventist Novo Tempo station and began watching. After watching the programming for a year, Michael wanted to be baptized.

Michael found a Seventh-day Adventist church in the city center and decided to go there the following Sabbath. Arriving at the church, he looked for the head elder. “I want to be baptized,” Michael said. The elder was happy to hear this but told Michael that he first needed to have Bible studies. “But I’ve already studied the Bible for a year,” he told the man.

Later that week the elder visited Michael in his home and brought a series of 27 Bible studies with him. The plan was to have weekly Bible studies, but on the first visit, Michael asked if he could have the entire set. The next week when the elder returned, Michael had completed all the studies and was eager to be baptized!

“You Will Not Join That Sect!”

When his grandparents learned the news they were very upset and told Michael, “You will not join that sect!” But Michael was determined to follow what he had found in the Bible and told his grandparents that he had to obey God rather than man, and that he hoped they would come to his baptism.

After fasting and praying for three days, Michael again asked his grandparents to attend his baptism. This time they agreed, and after his baptism they hosted a special lunch in Michael’s honor.

Everyone at school was amazed at the incredible changes they had seen take place in Michael’s life. No longer was he depressed and living the life of a recluse. He started a Bible study group and many of his fellow students came, wondering what had caused such a huge change in their classmate. He attended Sabbath School and church regularly, made several friends, and became involved in the church. He also joined the South American Division’s “Mission Caleb,” a unique youth project that focuses on discipleship by challenging young people to dedicate part of their summer break to do evangelism in places where there is no Adventist presence.

“God Will Find a Way”

It was while participating in Mission Caleb that Michael met the boys’ dean from an Adventist boarding academy. The school, Instituto Adventista Agro-Industrial, is more commonly known as IAAI (pronounced “E-I”), and is located in the Amazonas region in northwest Brazil.

In recent years, IAAI has undergone a transformation and has become well known in the community for its caring, Christian students and excellent academics. Only those students willing to abide by the school’s strong Adventist values, including spiritual, lifestyle, social, and academic standards are accepted. As a result, enrollment at the academy has skyrocketed, growing from 100 to 400 students in just three years.

After hearing about the academy, Michael longed to study there. “I can’t promise you that it will work out,” said the dean, “and I can’t pay for you. But God loves you, and He will find a way.”

Michael learned about literature evangelism and went to Manaus, the largest city in the Amazonas region, to sell books and earn money. He worked hard and saved as much money as he could. One day, however, after drinking some contaminated water, Michael became very ill and ended up in the hospital. After paying all of his medical expenses, he had only 1,000 Real (pronounced ree-AL), the Brazilian currency. It cost 1,500 real every month to study at IAAI.

Michael was discouraged, but didn’t give up hope. He prayed “I don’t know what is happening, but You [God] didn’t bring me here for nothing.”

Now I Have Peace

Michael decided to talk with the school’s principal, Saulo Albino, who told Michael there were several people willing to help him financially so that he could attend IAAI. In addition to his classes, Michael works two hours every day to help with his school bill, and during the summer works as a literature evangelist.

“Now I have my dreams completely, and I’m studying in an Adventist school,” said Michael. “Today I can say that I have peace.”