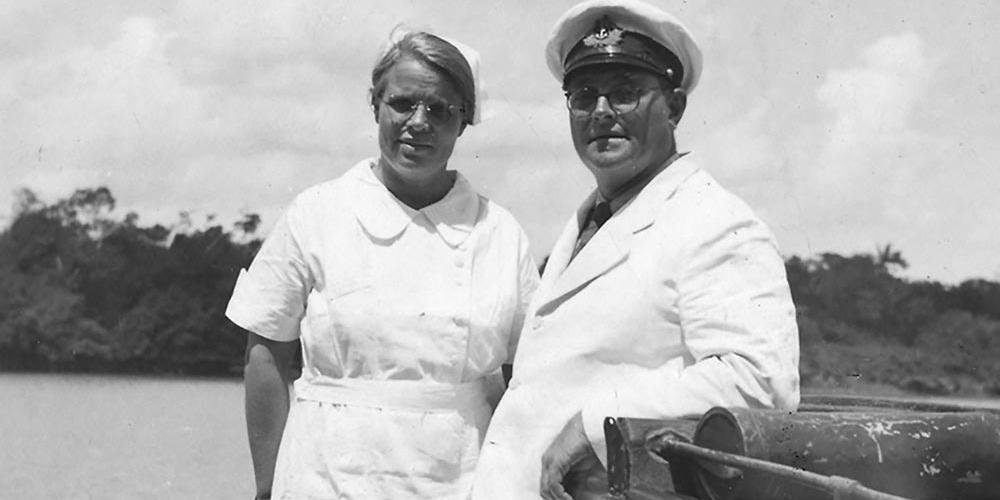 Angels on the Amazon

The longest river in South America is the Amazon. It flows from the Andes Mountains of Peru, only 85 miles [140 kilometers] from the Pacific Ocean, and almost 4,000 miles [6400 kilometers] to the Atlantic Ocean.

The large city of Manaus [mah-NOWS] lies along the Amazon. [Locate Manaus west of Belem, on the coast.] Outside the city on a quiet inlet rests a boat called the Luzeiro [Lu-ZAY-roh], which is the Portuguese word for “light bearer.”* This boat and others like it sail along the Amazon, bringing medical care and the good news about Jesus to the people who live along the river.

The boats take doctors, dentists, nurses, and other missionaries to the people living in the rain forest. They take teachers and preachers to their new workplaces in riverside villages too. The man who built most of the Luzeiro mission boats was Leo Halliwell.

Pastor Halliwell steered the Luzeiro along the river. The jungle trees formed a green canopy overhead. Jack, Pastor Halliwell’s 15-year-old son, stared into the jungle hoping to see a jaguar, the “jungle leopard.” Overhead a brilliant red, blue, green, and yellow macaw flew by, squawking loudly. In the distance a woolly monkey howled. Then the boat’s engine slowed, and Jack noticed three well-dressed men waving at the Luzeiro from a canoe.

“Hello!” one man called out. “Can you give us a tow upstream?”

Pastor Halliwell knew it was dangerous to give hitchhikers a ride. But something impressed him to stop. “Throw them a line, Jack,” he called to his son. Jack threw the men the rope, and the men attached it to their boat.

Two men climbed aboard and stood beside Pastor Halliwell as he steered the boat up the river. Suddenly one of the men grabbed the wheel and turned the boat around. The boat shuddered and moved suddenly away from the riverbank and out into the middle of the river. The sudden movement nearly threw Jack overboard!

Pastor Halliwell stared at the waters they had just crossed. Not 20 feet from where they had been heading, the jagged points of hundreds of rocks lay just beneath the surface of the water. If the boat had hit those rocks, it would have been ripped apart. The missionaries might have lost their lives that day!

“Whew!” Pastor Halliwell exclaimed. “Thank you! You saved our boat and probably our lives!”

The man smiled but said nothing as he steered the boat through the rocky waters. Then the man gave the wheel back to Pastor Halliwell. “Thank you for the ride, Sir,” the man said. “If you stop, we’ll get out now.”

This is strange! thought Pastor Halliwell. There are no signs of a village nearby. Nevertheless, he stopped the boat, and the two men climbed back into their canoe and pushed off into the current.

“Watch where they go,” Leo called to Jack.

Leo turned from the wheel. The river was empty. There was no bend in the river, no ripples in the water. The three men and their boat had disappeared.

They must have been angels! Pastor Halliwell thought as he steered the Luzeiro. Thank You Lord for sending Your angels to protect us today! What a wonderful God You are!

This quarter part of the Thirteenth Sabbath Offering will go to build two new “floating church” boats that will follow the Luzeiro into many unreached villages along the Amazon River. The floating church boats will go into the villages and stay for a while, holding evangelistic meetings. Afterwards, a new church building will be erected in the village, and the floating church will move on to the next village. Thank you so much for planning to give generously toward this special offering.