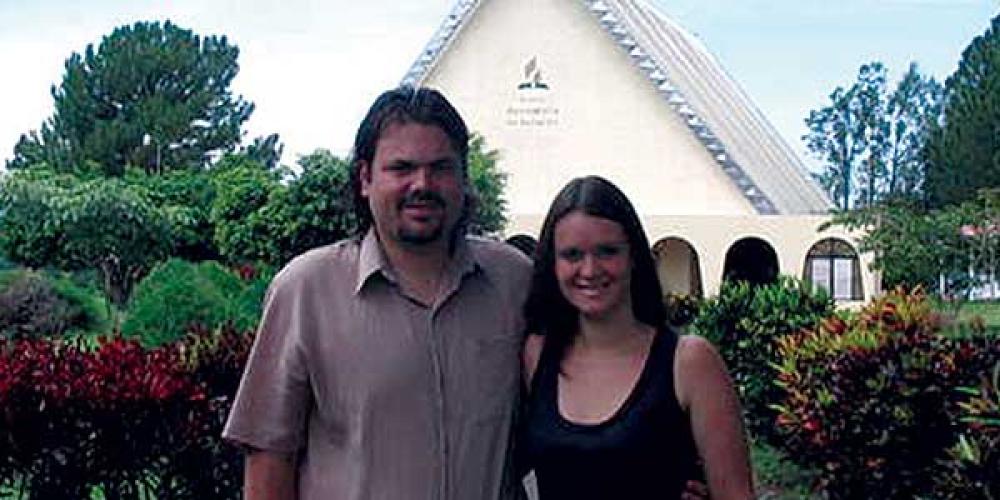 Yes, God Does Give Presents

When God guides us, we have an unequaled peace. And we felt this peace. A door had closed, but we hoped that others would open.

God certainly directs so that we may accomplish His will. The incredible experiences that He has granted us confirm this. In a special manner, opportunities opened for Rachel and me when we studied at the Paraná Adventist College in Brazil. We met in class and discovered a deeper reason to be there: God caused our paths to cross. After one year and one month of dating, we married in the College Church.

A short time before marrying, we felt that God was calling us for a missionary experience. This desire increased more and more. We began talking to the South American Division, and applied for a position in South Korea. After several weeks of tense waiting, we were informed that we could not go there because of special requirements imposed by the government. It was at that time that we began to question if we were really hearing the voice of God, or if it was just something in our imagination.

But when God guides us, we have an unequaled peace. And we felt this peace. A door had closed, but we hoped that others would open.

At times, we felt that we would like to have our faith increased, or have a more intimate relationship with God. And we were already praying for this for some time. The difficult thing is that many times the paths through which God leads us to this closer relationship are paths that in our understanding do not offer much, or will lead us to great deceptions. At times we feel that we are doing something that is totally crazy. But in reality, it is only in circumstances like this that our faith is increased. When things in life go beyond our control, this is when we begin to depend totally on God. And then we have the marvelous opportunity to know our Creator more intimately.

East Timor had a great need of help, we discovered. However, all travel expenses would be our responsibility as well as our monthly support while we were there. We did not have these funds. At this time, a project to obtain funds was put into place. However, the project did not result in bringing in any funds. And once more, it seemed that God was not participating with us in our struggle. It was our desire to serve Him, however our attempts to find a place to serve Him seemed to always result in some difficulty!

Finally, we realized that complete dependence on Him was necessary. And He does not fail. After we were married, once more we felt that God was speaking to us and His direction seemed to lead us to the United States.

Although we did go to the United States for a visit, while there and without our knowledge, He indicated another country to us. Far from East Timor but the needs were great. The country was Costa Rica.

When we were leaving Brazil for the USA, before boarding the plane an announcement informed us that the flight was overbooked and that we would have to travel at another time. However, for this inconvenience, the airline company gave us US$600 in tickets from the company.

During our stay in the USA, we visited the General Conference Adventist Volunteer Center where we were informed that we could choose to serve in one of several countries, among them Russia, Nicaragua and Costa Rica.

The reimbursement for the flight overbooking and the offer of airline tickets was decisive. What we had received from the company was practically the price of the tickets to Costa Rica. God was already preparing a place for us long before we knew. And the best part was that He gave us the airline tickets as a present!

We had the privilege of serving through Adventist Volunteer Service in Costa Rica for 10 months. The spiritual experience was fantastic. Offering help to many people was a wonderful experience, but in the end, we were the ones who received the most benefit. A more intimate relationship with God was our request, and He answered us, and allowed this experience to draw us closer to each other and to Him.

During the period that we spent in Costa Rica, we worked in the Central American Adventist University Language Center. Our responsibilities included teaching classes in English, Spanish and Portuguese. Most important, however, is that we had the opportunity to show the students something more interesting than a new language; we shared our friendship with God. Several students realized how important this is and began to seek their own relationship with God. And this is the most rewarding thing that we could have experienced there.

God is more than willing to guide our desires and accomplish things in our lives. He is anxiously waiting for us to seek this closer relationship with Him. Whenever anyone has the opportunity to participate in a missionary experience we strongly suggest the Adventist Volunteer Service. And remember, God establishes our desires, and He provides all the means we need to serve Him in distant lands or locally. We only need to take the first step, even though it may be in the dark, and accept the powerful Hand that will guide us.

Alberto and Rachel Streicher served as volunteers from January to December, 2005.

To view more pictures for this article and to read more articles from this issue of Mission Post Magazine, visit http://www.adventistvolunteers.org/MissionPost/v7n4/v7n4.pdf.