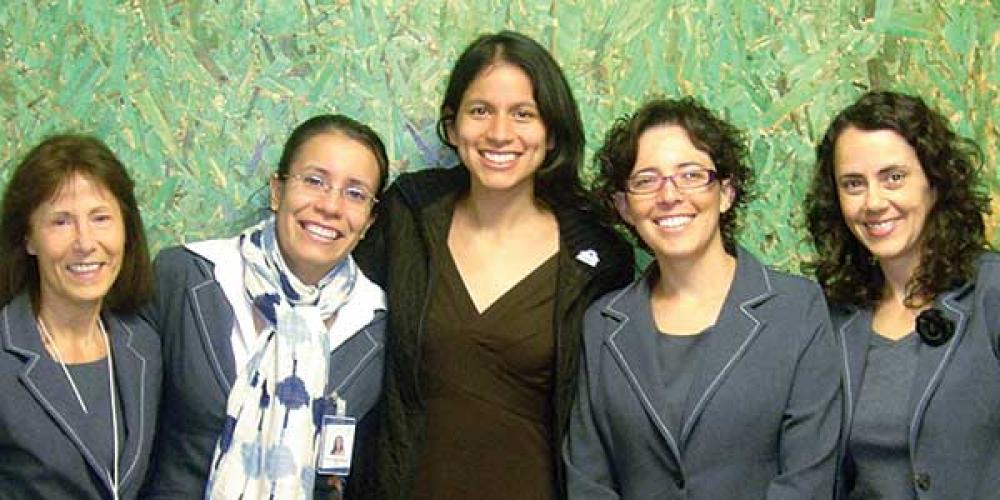 How the Pastors Prayed

My experiences while volunteering as a Translator/English Teacher were varied and they all impacted me so differently.

Oh and then there was the pillow,” I say with laughter in my voice.

“The pillow? What was that about?” my mom questions one evening as I relive my memories of five months spent serving at the South American Division office in Brasilia, Brazil in 2011.

My experiences while volunteering as a Translator/English Teacher were varied and they all impacted me so differently. Yet, as I listened to the anecdotes I was recounting to my mom, I recognized that on a spiritual level, what had intrigued me the most were the pastors, and how they prayed.

I still recall the week-long evangelistic series where every night, I sensed real holiness pervading the sanctuary whenever the division evangelist would solemnly kneel and pray in silence. Someone who knew the evangelist personally assured me that he was doing none of it for show, but that, during that sacred silence, he was pleading with God for divine help and for the salvation of the precious souls in the congregation. I remember very little about the topics he presented, but I cannot seem to forget those inaudible prayers and the individuals streaming to the front of the church in response to his earnest appeals.

I can see the face of the pastor who was the director of the Stewardship Department. A spirit of such peace and joy radiated from him. He would go from office to office within the division headquarters sharing a scripture with each employee and calling us to prayer. His prayer with the five of us in the Translation Department was short, but as we turned back to our computer screens we were renewed people.

With true admiration I listened to another pastor share during morning worship about how he had purposed in his heart long ago to wake up at, what for me was an incredibly early hour, to talk with God. He would pray for himself, for his wife and daughters before they awoke, and for others who were on his heart. Although his daughters were now away at college, they would often call him with special prayer requests because they knew without a doubt that at a certain hour, their Dad would be lifting them and their needs up in prayer.

Nearing the end of May, there was lots of commotion at the division. The South American Division Ministerial Council was approaching fast; activity in every department was at an all-time high, as was the stress level. It was the first time in the history of the South American Division that more than 4,000 pastors would be meeting in one place, at one time, for training and encouragement. And yet, as deadlines and last-minute tasks loomed, the morning worships did not become shorter. On the contrary, worships became noticeably longer, and prayers took up more time and were spoken with more earnestness than before. I specifically remember a worship that was organized by the division’s Ministerial Association to include prayers for each aspect and component of the upcoming Council. Hearing the exhausted, anxious pastors address God with such needy, humble petitions, but in full faith, left me with an awed feeling.

Their prayers were answered. The Ministerial Council was an experience that surpassed everyone’s expectations, both among the organizers and among the attendees. However, of all the images imprinted on my mind, one stands out. I was walking through a huge auditorium and hallway, filled with more than 4,000 pastors, meeting in small circles of ten to twelve. Pastors, young and old, with heads bowed, knees bent, and arms on one another’s shoulders. The air was filled with the murmur of prayers rising in Spanish and Portuguese. Something else filled the air too; I believe it was the Holy Spirit and I’m fairly certain the heavens were wide open over that convention center.

“So what about the pillow?” My mom’s voice pulls me back from my reverie.

“Oh yes, the pillow,” I reply. “The pillow lying on the living room floor, next to the couch in the pastor’s house. His wife tells me that it’s his spot for praying. He spends considerable time kneeling there and sometimes he forgets to put the pillow away. I just can’t get over how those pastors prayed.”

I’m happy my Mom can hear about my experiences, but I wish she could have been there with me and felt what I felt. In fact, I rather wish all Adventists could capture the truth carried in the resounding voices of over 4,000 South American pastors singing simultaneously in Spanish and Portuguese. Their song said, “To speak with God, what a privilege! To open the soul before the Creator, to feel that the heavens are open, and to hear the voice of the Savior.”

Ariana Brinckhaus, originally from the United States, served as an ESL Teacher and Translator at the South American Division office in Brazil. She served from February of 2011 through July of 2011. Ariana feels that her motivation to serve comes from her desire to see God’s message be carried out with love and willing hearts. Her purpose is to show glimpses of Heaven and it’s principles in terms that we can grasp here on Earth.