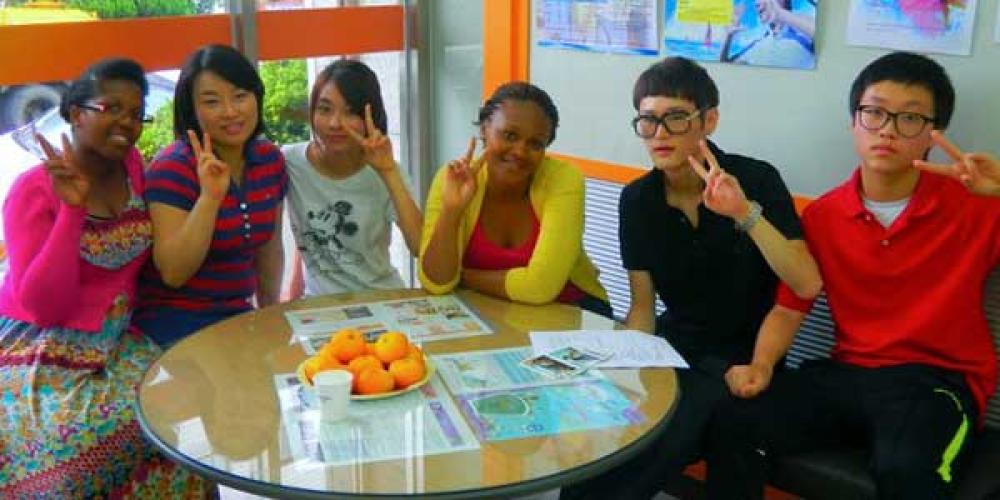 Life is a Ministry

Have you ever felt like you are exactly where God wants you to be? That is how I feel right now.

Have you ever felt like you are exactly where God wants you to be? That is how I feel right now. I wake up each day with that blessed assurance. It is amazing how everything in life is a ministry. When I was still in school, I had a conversation with God in which I asked Him to be with me until my graduation; in turn, I would dedicate a year to His service as a volunteer. Little did I know that God had such big plans for me. After graduation I started the application process to come to Korea as a volunteer teacher with a little bit of reluctance. It was amazing how smoothly everything went, without any problems. It was then that I realized that God was in the driver’s seat.

I came to Korea in December of 2010. I was very excited, maybe overexcited, because I was going abroad and I was being courageous, so people kept saying. I thought I would come here and be the vessel, but I didn’t know then that God would use His children to work on me as well.

When I got here, I had to go through orientation/training, where I made friends with volunteers from other countries like England, the United States, New Zealand, Australia, and my home country, South Africa. That is where culture-shock and homesickness got me. But after a few weeks, I got used to it all. I had to adapt, and the people here made it easy for me to do so. Korea is a beautiful country, and being here has made me appreciate nature and God’s mighty creation more than ever.

Now I understand Jeremiah 29:11: “For I know the plans I have for you...”* It does not say the plans I have for myself, but what God has planned for me. He has shown me greater things. For example, I go to class, and before we begin the lesson, we have five minutes of worship. At first, I had problems with some students thumbing through the pages of their textbooks and others talking while I prayed. But I got used to it and prayed for them even more. Now they respect worship time as much as any other moment in class. After a while, I started asking them what they thought certain Bible texts meant to them, and their responses showed that the Holy Spirit is indeed always at work. In Religion classes and weekend programs, we taught, or rather studied, with people who were mostly non-Christians; and it was amazing how they impacted our lives. They allowed the Holy Spirit to work in them and He gave all of us a better understanding of the Word. We got to know more about our students’ decisions outside the classroom when we spent some time with them socially.

Many times in my Religion/Bible classes, I have had students who did not know much about God. Some had never even owned Bibles before. When we gave them Bibles, they started reading them and spending time with God. Through these classes, they learned how to pray and study their Bibles. Most of these students told us that they only came to Bible classes to improve their English, but before the term was over, I had students come to me to tell me that they had learned a lot about God and now wanted to have a relationship with Him. And the junior students always put a smile on my face even when I was having a gloomy day. It was so rewarding to see little children reciting Bible stories and applying them to their lives.

The role they play in my life is amazing. The year I spent in Korea has been amazingly beautiful. God is using me to reach His children, to spread His word, but at the same time, He is using them to minister to me. He is teaching me patience, acceptance, and humility in all levels of life. I have learned to be selfless, as I have been praying for all my students, interceding for them, and they for me. He is teaching me how to fully and entirely depend upon Him. Being here is not a mistake. It has helped me grow; it has helped me interact with people of a different culture and race. It has helped me stand on my own two feet, but most importantly, it has taught me more about Jesus and His love for His children. It has taught me how to be a servant first to God and then to His people. Given another chance, I would do this all over again. Understanding that it is not about me has also made me realize that God uses us in many different ways to witness to His children about His kingdom. Who am I to stand in His way?

If you are thinking about doing volunteer work, do not think twice, for you will benefit, and your spiritual life will be well-fed and nourished. With you doing your part, the Holy Spirit will win many souls for the Kingdom of God.

Akhona Tshangela is originally from South Africa. She served as an English-Religion Teacher in South Korea from December of 2010 to December of 2011. Akhona feels that her volunteer experience has been the highlight of her Christian life. She thanks God every day for the opportunity to serve Him in a foreign land, and prays for a chance to do it again.