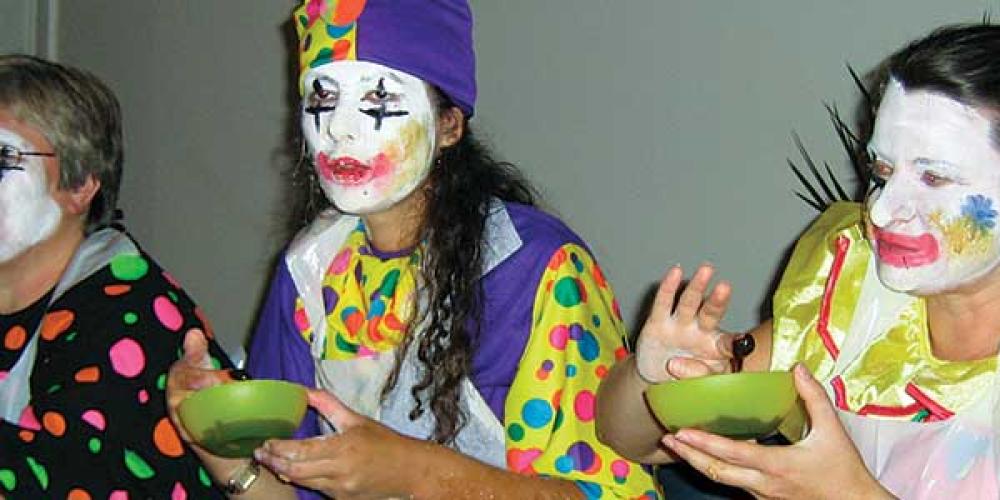 I am sure God leads each one of us in His special way, and very often, in the present moment, we can hardly understand why certain things happen.

I am sure God leads each one of us in His special way, and very often, in the present moment, we can hardly understand why certain things happen. But after some time passes, we can clearly see God’s wisdom and providence, and understand what may have seemed illogical to us before.

I had a very tremendous experience with God. When I was 15, I had a big choice to make in my life, so I asked God to make a deal with me. I asked Him to make a certain circumstance clear to me and then I promised to go where He would want me. Of course He kept His part of the deal! So I knew that I had to dedicate at least one year to God as I had promised. I entered the Ukrainian College of Arts and Sciences. Years passed, and I kept praying about my promise, explaining to God that I was a student and it was hard to leave college for a gap year. I thought that it was Africa where I should have gone as a volunteer, and I expected to be shown some signs from God, but I had no indications of anything connected with Africa. I studied in Medical Missionary School, hoping that it could lead to Africa, but nothing happened.

One day I was doing research on Adventist educational institutions in Norway for a couple of friends who had asked me about it. I searched the SDA Yearbook and found information about the Norwegian Junior College (NJC). The website was in Norwegian, so I didn’t understand anything, but I contacted them by email and asked for information. As a response, I received a suggestion to be a volunteer at NJC. It was so unexpected, but I sent in recommendations and waited to hear. However, it turned out that all the volunteer positions had been occupied. I didn’t take it too seriously as I still had the desire to volunteer in Africa.

One year passed, and one day, I got a phone call from someone at NJC. I was very surprised because I had completely forgotten about it. They had been praying for a volunteer and had remembered my letters of recommendation. They were looking for someone to serve in their dormitory. At first, I was very frustrated. All this time I had been waiting for an assignment in Africa and now God was calling me to a country which was much richer than my own! Could this really be a ministry? I prayed about it and the people at NJC prayed for me. Then, I got a visa very quickly and easily. It was just one more proof of God’s providence. It was clear that it was God’s will.

I was a part-time student at a university in my home country at that time, but it didn’t stop me from serving in Norway. I had to return to Ukraine twice, when we had holidays at NJC, to take my exams at the university. Everything worked out well until Spring exams. It appeared that my last exam was on a Sabbath. I made a written request to the Dean’s Office to replace the date of the exam for another date. They objected. We had a long conversation. They laughed at me about the Sabbath and told me that I could either take the exam on the Sabbath or choose not to receive my diploma. This was my last exam. I left the office with tears rolling down my face. In my mind, this was so unfair, but God gave me the encouragement and the assurance that I could cope with it by His power. So I applied to the vice president of the university and got an appointment with him. We had a very short talk. He told me that I could take two exams on the same day. With a scornful smile, he said, “May your God help you if you believe in Him so much!” I was very worried as both tests were on computers and I would have no second chances. I wrote to my friends at NJC about my dilemma. They prayed for me, along with my friends in Ukraine. I was scared, but I knew that God wouldn’t be mocked. I really trusted the Lord, and my faith grew to be unshakable. Many professors at the university knew about my situation and they closely observed my behavior. Some of them felt that I couldn’t cope with the task. That only motivated me all the more to testify for the Lord. Satan made me feel afraid by sending me thoughts of failing the exams, but I held on to God’s hand! I did it in an amazing way by His grace alone. I got my diploma! I came back to Norway and thanked everyone for their prayers. It was so exciting to realize what wonderful support we all have in Christ!

I will remember that year in Norway all of my life. It changed me and gave me the opportunity to know a new culture, to help people, and be used by God. It was not just a challenging job for me; it was a ministry, and it was such a blessed time for me! In Norway, there is freedom of religion, so I could practice freely there; but God wants us to prepare for a time when we might be persecuted. He wants us to be ready to stand for Him! He has a plan for each one of us. I am very thankful for all the trials I have been through at His hand. I do still hope to go to Africa one day, if it is God’s will. Maybe He wants me to go somewhere else, to a place I cannot even imagine now! But He knows the why, when, and where of every situation, so I know that I can trust Him to lead me there in His time. Praise the Lord! I’m happy to serve God like this!

Anna Kornienko is originally from Ukraine. At the time she wrote this article, she had served as a Kitchen Assistant at the Norwegian Junior College (NJC) from August of 2006 to July of 2007. After her marriage, Anna returned to NJC with her husband. They served as Kitchen Assistants from August of 2009 through July of 2011. She and her husband now live in Norway, hoping to be witnesses for God while furthering their education.