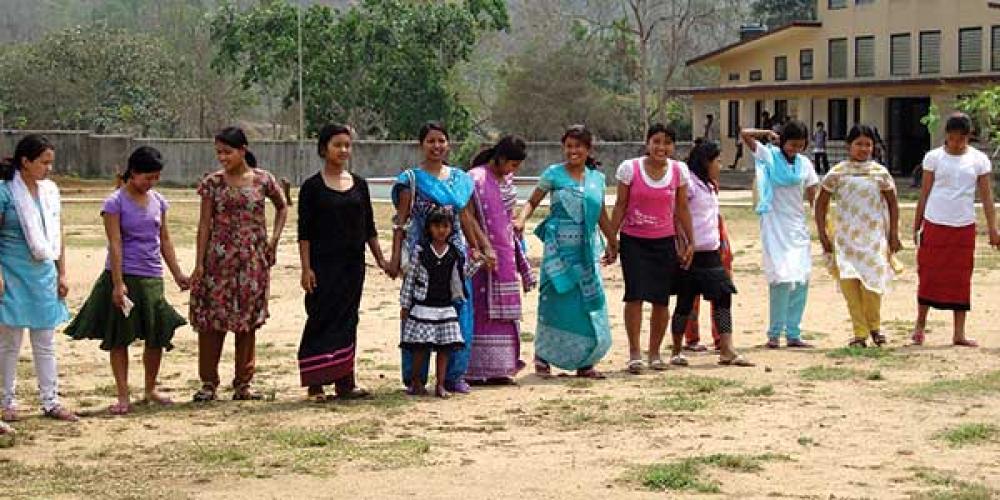 The Labors of Mrs. Langhu

My time in India showed me that the world is bigger, more complex, and friendlier than I had ever imagined before.

In the year between getting my bachelor’s degree at Walla Walla University and starting graduate school, I served as a volunteer schoolteacher in rural India. It was a challenging assignment, both physically and spiritually, with more than its share of long, dry spells. In the end, though, I overcame the challenges and grew to love the place and its people. My time in India showed me that the world is bigger, more complex, and friendlier than I had ever imagined before. I went to India for adventure, and to serve God and my Indian brothers and sisters; India provided me ample opportunity for both service and adventure. But while I served my teachers and fellow students in India, they also served me. Here is a story of one of many times that the people I had come to help, served me instead.

It was a Sunday morning in March 2010, and I was standing on the front balcony of my house in India, looking up at the pre-monsoon clouds that filled the sky. I was in the middle of my Sunday chores, and I had come outside to hang up my sheets and pajamas, which I had just washed in the bathroom. A few days earlier, I had recovered from a violent illness, and I needed to wash the smell of sickness out of my bedclothes. Now that the fever-racked days and nights had passed, I felt better than I had in a long time. The pre-monsoon storms had just rolled into my part of India, washing away all the dust of the dry season and making the world seem green and fresh.

I was a little more than two months from the end of a nine-month volunteer posting as a teacher at Riverside Adventist Academy in the Garo Hills of northeast India. My German roommate Valentin and I were the only foreign volunteers at the school. Riverside Adventist Academy is located in a village near the mouth of the Didram River Valley; the nearest city, Guwahati, is four hours away to the northeast. Maranatha Volunteers International built Riverside in 2007 to serve the population of northeast India, a region of 100,000 square miles tucked in between Bangladesh, Nepal, Bhutan, China, and Myanmar. At the time I served the school, the student body of roughly 850 included representatives from each of the seven states that make up northeast India.

While I was standing on my balcony on that Sunday morning in March 2010, Mrs. Langhu, the Nursery (Preschool) teacher, climbed the stairs to my balcony and started to chat. Ma’am Alisha, as we called her, had been a familiar face around my house during my illness, so I thought nothing of her arrival, and I didn’t suspect that she had an ulterior motive – a very kind one! After several minutes of innocuous chit-chat, Alisha innocently asked me if I had finished my housework for the day. I said, “Not quite,” because I still hadn’t swept yet. She offered to help, but when she reached the kitchen where I kept the broom, she saw a pile of dishes in the sink and said that she would take care of those first.

Three hours later, the kitchen was cleaner than it had been when the house was built! Alisha attacked the kitchen with a fury. First she washed the dishes, as promised, and then she scrubbed the counter, polished the stove, dusted the cobwebs off of the stove’s gas cylinder, rolled up the floor mat, and wiped the floor underneath. Then she moved to the shelf racks and windowsills. She picked up every cup, plate, bottle, or can; she wiped them off and then scrubbed the counter beneath. No particle of filth, no matter how small, was safe from the cleaning scourge. Alisha scooted out the refrigerator and wiped under it, then picked up the table and dusted the bottoms of the legs. Under the produce baskets, she cleaned up the most miniscule fragments of onion or garlic skin, and every stray lentil or grain of rice. In the darkest corners under the sink, she hunted out lizard scat and dead bugs. She cleaned all of it, and the kitchen sparkled.

I realized quickly that Alisha neither wanted nor expected my help, so I retreated to my room and sat at my desk, not sure what to do. Alisha’s cleaning campaign started a flood of attention and help for Valentin and me that lasted all day. Ma’am Christina, another teacher, came over to help Alisha, who by now had moved to the bathroom and had started washing Valentin’s clothes. Valentin, meanwhile, had a brief bout of malaise, prompting a procession of medical professionals and amateurs to come offering medicine and advice. All of our visitors and helpers came attended by rowdy children. In the midst of all this, the rooftop water tank ran dry because there was no electricity to power the pump—and because of all the washing going on. Somehow, while helping Alisha with the cleaning, Christina managed to cook and send over two meals for us—so we wouldn’t have to dirty our kitchen, I suppose—but she sent them so close to each other that we were still full from lunch when supper arrived.

The labors of Mrs. Langhu were one episode of many acts of kindness offered to me by friends and strangers alike while I was in India. Wherever I went, people offered me something to drink and something to eat. When I was sick, the students brought me cards. To an extent that I have seen nowhere else, the people of northeast India lived out Jesus’ example of simple kindness towards all people. When a student gave me a bottle of water to wash down some searingly spicy cafeteria food, I thought of how Jesus had said, “If you give even a cup of cold water to one of the least of my followers, you will surely be rewarded.” *

I certainly felt like one of the least of Jesus’s followers. When I departed for home in early June, the principal, Pastor Rimsu, took me up in front of the students in the chapel and thanked me for the hard work I had given them. I felt honored; it certainly had been hard work teaching in a tropical country and adapting to a different culture and way of life. At the same time, though, I felt that the people of northeast India had given me more with their simple kindnesses than I could ever have given them as a volunteer schoolteacher.

Willy Logan, originally from the United States, served at the Riverside Adventist Academy in northeast India. He served as a Teacher from June of 2009 through May of 2010. His desire is to represent Christ not only through speech, but most importantly, in the way he lives his life.