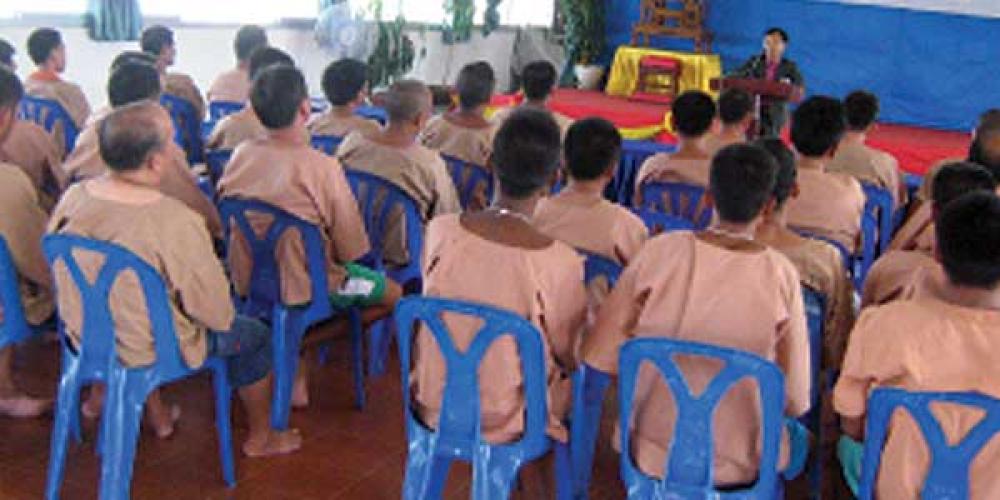 I’ve noticed something interesting since I left home to be a volunteer. God will use every bit of talent or gift that He’s given you for His purpose, if you allow Him.

I love a good preacher, and I’ve been inspired by many over the years, but I take them and what they do for granted. Each week I expect the preacher to...well...preach, without any thought as to what it has taken him to create something rousing, inspiring, challenging and heartfelt – a personal message to me from God. That’s a lot to expect, isn’t it? But it’s part of the nature of their job, along with a great big calling from God. Every now and again I hear comments like “I could never do what he does!” With such high expectations as mine, neither could I!

However, I’ve noticed something interesting since I left home to be a volunteer. God will use every bit of talent or gift that He’s given you for His purpose, if you allow Him. One of the gifts He gave me was a sanguine nature, which comes with the ability to be outgoing when I am around a group of people. I have also noticed that when asked to preach, I get nervous, and although I’ve done it maybe twice, it sets my knees knocking and turns my solar plexus to jelly. But ask me to share just moments, or at most, the night before Sabbath Service, and I’m totally at ease. This is where God is using me and it’s been an incredibly uplifting experience.

Before leaving home, I remember telling God, “If You’d like me to share anything about what You’ve done in my life, I’d be happy to do so.” And so it began; I started getting asked to share about how I came to be in Thailand. Next, it was a lecture about graphic design as a tool for the church, and then it was sharing something encouraging at church or on the street. The opportunities kept coming!

I love the art of spontaneity, and although I shouldn’t be, I am totally amazed that the Lord chooses to speak to and through me in this way. It reminds me of the story where God tells Moses that He wanted him to go and be His spokesman in Egypt. As they discuss it, God finally says to him, “Now therefore go, and I will be with your mouth and teach you what you shall speak.”* This is what I’ve been experiencing, in a much smaller way, of course. I mean, I’ve not yet been able to speak to the King of Thailand, but I have often heard the very thing that the Lord wished me to say next.

During one experience, I was sitting among the congregation, not knowing that I was the speaker who was to cover for someone that never showed up. The church was packed with about 40 people. As I approached the front, I still had no idea what I was to say. Smiling, I introduced myself and asked everyone to pray with me. I silently asked the Lord, “What do You wish me to share?” I strongly felt the Lord urging me to share what He’d revealed to me about a certain aspect of my life. And like Moses of old, arguing about the duty he’s been commissioned with, I struggled with what had been asked of me. It was so fresh, only days old, and I was feeling rather vulnerable and still processing the new information given to me. But God asked that I share it. So I began, and each time I paused for air, the Lord would tell me what to say next. After talking for almost half an hour, I saw that women were wiping their eyes and men were sitting on the edges of their seats. I knew then that God had used my words to touch, heal and love them. I was awed and humbled that I was used in this way. What’s more, it continually shows me that God is real and cares about everything in our lives. He will actually speak to us! How amazing is that?!

To date, the most unusual situation I was placed in occurred while I was at a men’s prison in central Thailand. My video production team had been granted permission to visit and film, as we were interviewing an ex-inmate who had found God while incarcerated. We were filming how his life had changed since he had been freed. We expected to be flies on the wall when we got there, so little did we know what was expected of us. We walked into a hall and saw 50 men seated there, wanting to hear us speak! We didn’t realize this until the Pastor, who had brought us, introduced us and then asked me to share something encouraging with the men! I was stunned. What could I possibly say to them that wouldn’t end up sounding like some sort of glib, generic encouragement? I mean, here I was, a white woman from a different country and culture, a mother, having no point of reference with these men, who didn’t even understand me. There was no trust between us. How would this work? Some of them looked bored already! So I asked God to help me. And immediately the answer was given, “Tell them of the time you were arrested.” So I did. While that was being translated, God told me the next thing to say. In a nut shell, I basically covered all the mistakes I’d made, the bad habits I had cultivated, how I finally turned to God, and how my life was changed by knowing Him. There were smiles, nods, and laughter in the right places, along with a few hearty cries of “Amen” and “Hallelujah.”

What was my reaction afterwards, when I was on my own? I cried, being totally overwhelmed with what had happened. I felt honored, awed and humbled, that, not only was I used to be a blessing, but I had also been given a blessing. My God talks to me – how wonderful! I am a conductor between the God of the universe and the translator. To Him be the glory. I’m excited to see just what He’ll do next.

Tania Hassounia, originally from New Zealand, writes from Thailand, where she serves as a Graphic Designer for the Thailand Mission. She began her service in February of 2012 and will continue through December of 2012. Tania feels that she has learned to accept people the way they are and encourages them whenever she can, knowing that God will use every situation for their good and for His glory!