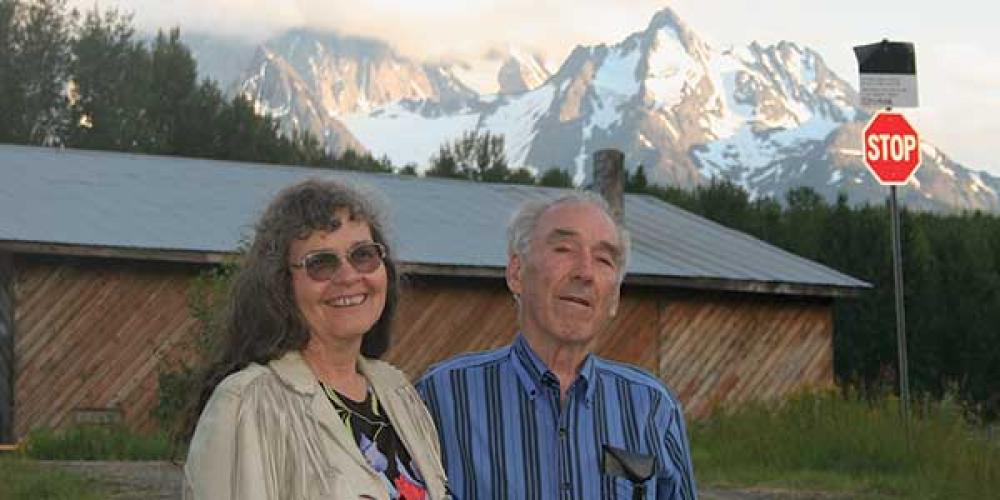 The villagers are amazed at the sudden change in Donelda. She transformed from an “Evil Woman” to such a kind, generous-hearted Servant of the Lord!

When I come up out of the water, I’m going to be a vegetarian,” was the emphatic statement by Donelda Turley the week before her baptism. A Gitxsan* native of northern Canada, she was previously known in the village of Gitanyow, as the “Evil Woman”, for she was an alcoholic, mean tempered, and abusive to her children.

One day, her son Travis was waiting by the bridge at the edge of the village for a ride to Kitwanga. Zanna (my wife) and I were serving as volunteer Bible Workers on the Gitxsan Reserve, and we were just leaving the village after visiting 22 homes with Native New Day Bible lessons when we saw him. We gave Travis a ride to his house. As we visited, Zanna gave him the “Radiant Native Health” magazine. He thumbed through it and paused at the back cover; Zanna explained that it was an advertisement about the Native New Day Bible guides that we delivered each week to the homes of eight other villages. She asked if he would like to receive them too. He said yes, and so she began to deliver the lessons to his house each week.

Often, his mother answered the door, for he wasn’t there. At first, she didn’t say much. After about two months she showed Zanna her little green-house at the back, becoming friendlier with each visit. One day she admitted that she enjoyed reading the Bible lessons, but asserted that she couldn’t ever go to church because of how badly she had been mistreated in the residential school. When she had completed the 30 lessons, Zanna asked her if she was interested in watching the Native New Day DVD’s. It wasn’t long until her husband, Moses, and her son, Travis, were watching the DVD’s with her.

One Sabbath, Donelda asked us to take her to the Terrace SDA Church, so that she could see her new grand-daughter at the hospital nearby. Her daughter-in-law was still in delivery when they got there, so Zanna asked if she wanted to attend church with us and then return to the hospital later. Hesitantly she agreed. As we entered the church, she was trembling so badly that even the Pastor was worried. She sat by the door in the back row.

This particular Sabbath, the students of the Spring Creek Adventist School were in charge of the service. As the children sang, Donelda wept. On the way home she explained. During the service, she had wished that her grand-daughter could have a chance to learn to sing like that. “Can’t you bring all those children out to our village to sing to our kids?” she said.

Later that evening, Moses asked her to have a drink with him. She got the beer out and poured them each a glass. She took a sip or two and pushed it back saying, “I can’t do this; it just doesn’t seem right! I can’t go to church and then come home and drink! It just isn’t right!” She never drank again.

Donelda made arrangements with the pastor and principal of the church school to invite the students to the village school to sing. They also gave each child a stuffed toy. Then they went to the Elders Luncheon and sang for them. Everyone was so pleased!

We started to bring Donelda to our home on Friday evenings, and she would spend the night so that we could get to church in time for Sabbath School. She really liked the discussions. We always stayed for the afternoon service at the All Nations Center, where they serve soup to the Natives and the local people after the worship service. Donelda then asked if she could serve soup to the Elders in her village.

When the Pastor held a short series of meetings in Gitanyow, Donelda didn’t miss a single one. Then, she asked us if she could be baptized at the Terrace SDA Church! Two of her boys and several other relatives came to her baptism. She came up praising the Lord, and true to her word, she has been a vegetarian ever since. She was given a large kettle and some vegetables, and she started serving soup to the Elders in Gitanyow the day after her baptism. ADRA is now helping fund Donelda’s Elders Soup Service.

The villagers are amazed at the sudden change in Donelda. She transformed from an “Evil Woman” to such a kind, generous-hearted Servant of the Lord! Moses has now quit drinking and he and the boys have visited the church too.

What a blessed privilege to see the Lord going before us and opening doors and hearts, and changing lives! What a thrill it is to be His hands and feet, taking His Word to these wonderful people! Over 300 homes in nine villages within a 100-mile radius have completed the Native New Day Bible lessons. We spent a lot of time nurturing the many interests. Lives are being changed by the Word of the Lord!

*The Gitxsan are an indigenous people whose home territory encompasses approximately 53,000 square kilometers of land in the area known as the Skeena Country in British Columbia, Canada.

Leif and Zanna Ove (photo above) are originally from the United States. They served as Bible Workers under the Terrace SDA Church in British Columbia, Canada. They served from November of 2009 to November of 2010. They both feel that is has been deeply satisfying to see God changing the lives of people everywhere.