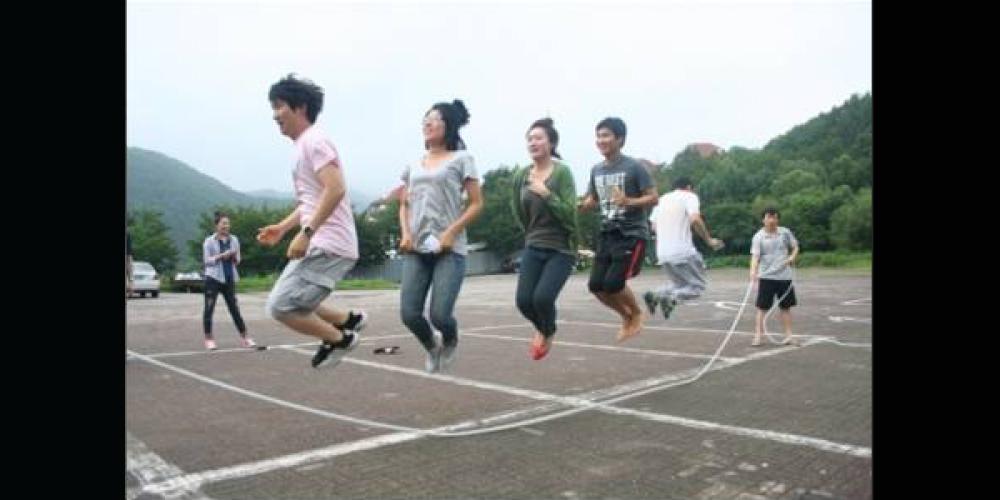 Discovering the Beauty of South Korea

Hearts pounding with excitement, my wife and I stepped off the plane at Incheon, the main airport in South Korea.

Hearts pounding with excitement, my wife and I stepped off the plane at Incheon, the main airport in South Korea. We were filled with wild dreams of new discoveries and possible achievements. Having left Africa thirty hours ago, in the heat of a beautiful summer’s day, we were met by a cold winter’s day in Korea. On the way, we had discussed our plans of evangelizing the whole of Korea in just the one year we intended on staying.

We quickly went through the necessary custom checks and were greeted with a “Good ebening, velcome to Korea” by most of the officials. This made us smile, and we were more determined than ever to teach our students how to speak English.

We were met by members of the Academic Office, who soon got all the new arrivals together. To our surprise there were about twenty of us on the same flight, and we hadn’t even known it! We soon got to know one another and found that there were people from all over the world. But the best part was learning that we all had the same idea about evangelizing Korea in the period that we had signed on for.

Our luggage was taken to Seoul Main, where we would stay and where our orientation would take place, but we had to travel by express bus. Now this was one of the worst ordeals of my life. I was used to the driving skills of the African taxi drivers that can whisk through the traffic at death defying speeds, changing from one lane to another, squeezing into spaces that are hardly half a car’s length, thereby cutting travel time from the usual thirty minutes down to fifteen.

Well, traveling in that bus made the African taxi driver look like a student driver. My prayer life increased by several degrees during that one hour of travel. Nobody said a word throughout the journey and when we reached our destination, I heard many sighs of relief and praises going up to God – of which mine were the first. It was one of the worst experiences I have ever had!

It was snowing when we arrived at Incheon, and for those of us from Africa, it was our first experience seeing snow fall. We were shown to our rooms and most of us retired as we were exhausted from the long flight. Early the next morning, we got ourselves ready to meet the day’s appointments, which started with a hearty and healthy breakfast. This was followed by worship and personal devotional and prayer time. Introductions followed, and then we got down to the details of being trained on how to conduct a class with foreign students.

It was then that we realized that our perfect plan of evangelizing and teaching English in Korea was far different from the reality in which we now found ourselves. Our concept of the Korean people as being “primitive” in comparison to the Western cultures was far different from what we were told during this meeting. We had to rethink our whole strategy and change our concept. We had to fit ourselves into their culture and their customs.

We started reading and studying their history and culture. We adopted some of their customs and with prayerful hearts, we started loving these people as if they were our own. They are not complicated, nor are they simple-minded; they are highly technical and advanced in many areas. Most of all, they are just beautiful. We went through our orientation with completely revised attitudes. We started seeing them through the eyes of Jesus.

After the orientation period of about eight days, we were sent to a city called Dae Jeon, which is about three hours from Seoul. We thanked God that this bus trip actually turned out to be very pleasant. So we enjoyed the view of the country side, which was beautifully covered by snow. The landscape immediately changes outside of the city. We encountered small farm-like holdings with crops of fruit trees and vegetables, which were under the snow. We also saw scenic clusters of homes and oddly shaped buildings.

Our first day of teaching was also something of an experience. Gone were the Smiths and Jones.’ Now it was Kim, Yung, Yun, Kyeon, Kyun, etc. My pronunciation was horrendous, and many times I saw the students snickering behind their hands. This made me determined to get it right. But alas, I still make mistakes and I still have to bear the snickering. And so our first year progressed with me learning and teaching, and they learning and snickering. But each day my love and admiration for these people grew stronger and stronger. I have never encountered such a proud group of people. They rate respect and honesty very highly among their cultural teachings. They are non-confrontational and strongly believe in peace and being happy.

Each day, we started class by reading a text from the Bible with a brief explanation of the meaning and lesson. The lesson of the day was then started, bringing with it wonderful opportunities to make great friends of the students. We also taught an hour-long Religion class, where we had the opportunity to witness for Christ.

There were many other opportunities to share our beliefs outside of class. Friday evening Vespers and Sabbath Morning Clubs provided some of those beautiful moments where each of us (teachers) could share what we believed and what God has done for us. The many baptisms that took place vouched for those moments. These people are hungering after the Word of God. Once they see our conviction being displayed in daily life, they also want to live such a life.

We built many wonderful friendships during this time. Cultures and customs are forgotten, or they melt into one, when people from different worlds meet on the common ground of love and mutual respect. We didn’t see each other as strangers or foreigners anymore; we saw each other in a situation of need. We needed them to help us feel comfortable in their country and they needed to learn what we could teach. With such mutual feelings, the gulf of strangeness was bridged and we became caring friends of those that we had come to show a better way of life.

To be a volunteer in Korea, or anywhere else in this world, does not mean that you are giving something up. What it means is that you are answering the call from God to truly go into the world and tell people about the wonders of Jesus and His saving grace. Once you have responded to the call, you then go where God sends you, and you are fully equipped by Him to complete the task. Giving up the comforts of home and mom’s Sabbath vegetarian roast can never compare with the gleam of understanding that comes into the eyes of your student when he comprehends what you are teaching him. The dull eyes of confusion and lack of understanding disappear as the light of understanding shines brighter and brighter in their hearts. You cannot always have this experience while you are at home, teaching somebody that is similar to you. But when you teach someone that has been indoctrinated by the theories of Buddhism and Atheism and has to unlearn all of their previous beliefs, it is then that you experience the ecstatic joy of being a volunteer in a foreign land.

Well, we came for one year, and that is now nearly six years. I have only returned home once for a special occasion. That is the magic of Korea and its people. It changes you and you fall in love with them. When will we leave? When God tells us it’s time for us to go!

Being a dedicated volunteer takes more than just wanting to spread the Gospel of Jesus. We must feel the calling in our hearts and live it in our souls. It means that our duties go beyond just the hours of work for which we sign a contract. We have to be prepared to share our faith and assist in times of need, 24 hours a day and 7 day a week. Sometimes it even feels like twenty-five-eight! Do you want to experience the excitement of witnessing to souls for Christ? Become a volunteer! There is nothing on earth that can compare with the experience. You are needed!

*This name has been changed.