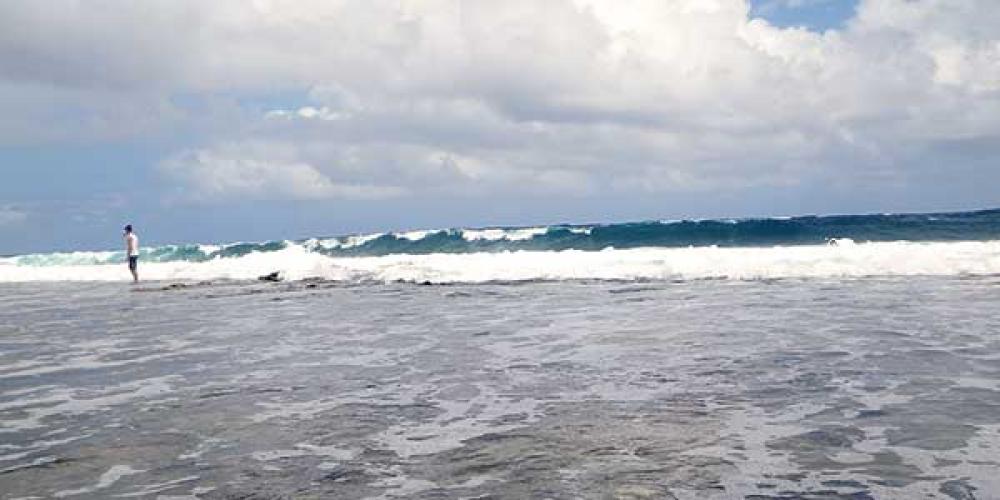 Someone was there, in the perfect position to protect me from hitting the rock. Someone who had a very soft body that protected me.

I always wanted to work in foreign lands, work for human kind, and spread the gospel. I always dreamed about being a missionary, but I never knew I could. My name is Luanna. I was born and raised in Brazil and had never lived abroad until the day I decided to risk everything and become a volunteer teacher. I have now been in Majuro with my husband for two years.

Our assignment will end this summer 2012, and I will return to my studies in São Paulo, but this period of my life will be treasured forever. It has been memorable for several reasons: here I turned 20, leaving behind my teenage years, here I got married (to my Brazilian fiancé), here I interacted with people from more than ten different countries on a daily basis, and here I was given 320 daughters and sons. Here I saw my children fall and get up again, I saw colleagues cry, and I saw angels - at least, I felt them, and that’s the story that I want to share.

If you know what an atoll* is, you know what Majuro is like! Here, the coral reef that blocks the open sea simply falls away about 330 feet from the school, which eventually forms the area where the waves break, due to the abrupt change in depth. Our side of the coral is very calm and shallow, until you reach the edge where huge waves start to form.

It was dangerous and very mysterious, so we had to explore! Alvin, our guide, had been here for four years, almost a native. He understood the ocean and knew how to get through the barrier. He took six of us on an expedition.

Everyone thought it was a great idea. We went into the sea when the tide was extremely low, especially at the entrance, where we found little starfishes. From far away, we could see the waves, and we knew they were huge. We had a little difficulty with our flippers. If you’ve ever tried to walk in the water with them, you probably understand what I am trying to say. They are good for swimming, but terrible for walking.

As we approached the waves where the sea water was only calf-deep, the situation became critical. People started rolling all over the place, and some bled a little because of the coral bed, but we managed to make it to the other side through the channels.

Even after the chaos, everybody was still happy and excited. There were just a few more bruises now. However, after the crossing, we were disappointed with the view. The ocean was very rough that day, and the fishes, turtles, manta-rays, sharks, and dolphins were not visible. I was only able to see a bluish-white, opaque light in which, if there was a shark thirty feet away from me, I would never have noticed it.

We stayed a few minutes, but the sea current was beginning to make us feel nauseated, so we turned around to come back. My disappointment with our short expedition distracted my attention, so the way back was much more of a surprise.

During our return, we became submerged, and the waves came at us from behind. We only knew the waves had reached us after they were already on top of us! Once we were through the channels, we were obliged to make our way by climbing and using our fingertips to grip the sharp coral plateau.

I was inside of a channel following the person ahead of me, when I saw a coral form come up in front of me. I needed to climb – fast! I didn’t have time to think or breathe. A wave engulfed me and carried me with it towards the coral. I couldn’t see anything; I couldn’t do anything. I only knew that I was going to be flung against the rock. My husband was behind me, but somehow I thought I had rolled over him and dragged him down with me. We would hit the rock at any moment! Wham! But I didn’t hit the rock. I hit someone else instead.

Someone was there, in the perfect position to protect me from hitting the rock. Someone who had a very soft body that protected me. Another wave came and I felt that same body again. I hit the coral rock three times, and each time this person was my shield. I felt so bad, because I didn’t want to keep hitting this other person. I couldn’t even see who it was. I thought that perhaps it was my husband.

After being thrown over a few more corals, I finally managed to get out. I was so glad to be returning home. At the first available opportunity, I examined my husband’s arms and legs to see how badly I had hurt him. But he didn’t seem to have many bruises at all. We were all out of the channels at this point and I saw that some had lost their snorkels, masks, and fins. Some were more injured than I was, with scratches on their backs, hands, and legs. I alone, had two small scratches on my palm and my lower back was slightly grazed. But that was it.

As we were walking away, I asked my husband how he managed to keep from getting bruised. Hadn’t I pushed him against the rock several times? He told me that I hadn’t. I thought that I must have hit someone else, and asked him who it could have been. He said to me, “Dear, there was nobody in the water near you!”

I realized that there was no need for any more questions. Now I knew who had protected me. In the same way that a fourth Person had appeared inside of a fiery furnace in Babylon, there had also been a seventh Person with us in the water. He shielded me and hugged me so that I would not hit the coral. I knew that God, through His angel, protected me that day and it was a touch that I will never forget.

*An atoll is a ring-shaped coral island nearly or completely surrounding a lagoon.

Luanna Knoener, originally from Brazil, writes from the island of Majuro, where she has served as a 3rd and 5th Grade Teacher. She is now serving as a Computer Teacher. She began her service in August of 2010 and will continue through May of 2012. Luanna feels that she can never give up serving God because she has felt the effects of His presence in her life. She encourages others to use whatever talents they have to serve God in any way they can.