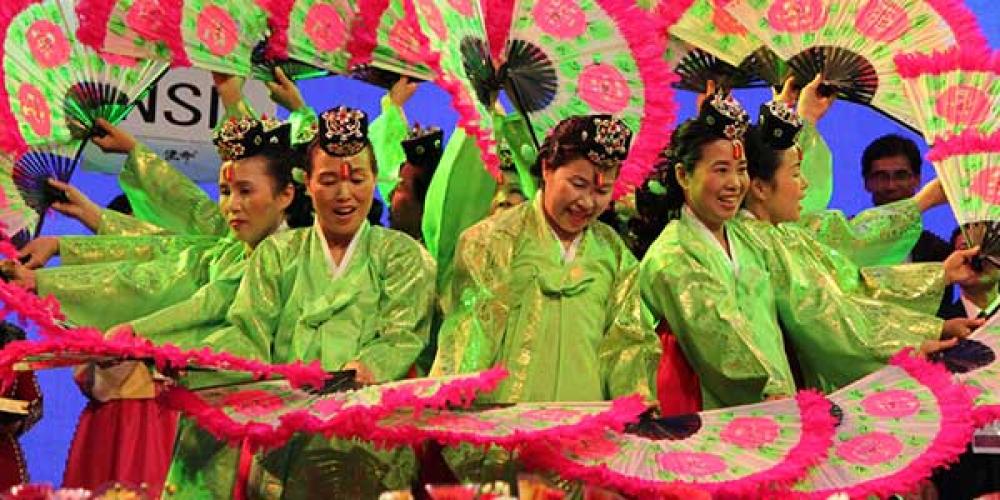 Seventh-day Adventists were challenged to “go forward into the harvest field.”

Seventh-day Adventists attending morning worship at the 2013 Northern Asia-Pacific Division International Mission Conference were challenged to “go forward into the harvest field” and tell the world about Jesus and His soon coming.

Pastor Ted N.C. Wilson, president of the Seventh-day Adventist world church, issued the appeal in an August 31 sermon heard by over 4,000 gathered at the Jeju International Conference Center on this island off the southern coast of South Korea.

Recalling the morning’s varied activities: the Sabbath school lesson, choral music, a sand “painting” done on a lightbox in front of the congregation, young children’s spirited performance that “told us about Abraham’s faith,” and a “wonderful testimony from China about the faithfulness of the people of the division,” Wilson praised the efforts he called but a prelude for the congregation.

“All of this is pointing to God’s call to you and to me, people who accept God’s commandments and the faith of Jesus, to go forward into the harvest field, all through the power of the Holy Spirit,” Wilson said.

In an impassioned message, Wilson discussed the three angels’ messages of Revelation 14 and their link to today’s world. He implored his hearers to lovingly and cheerfully share these messages with others to help “call out” those attentive to God’s word at the end of time.

He tied the First Angel’s message, a summons to worship the Creator of the Universe, to the keeping of the Bible Sabbath: “The call to worship God as the Creator automatically places upon people the responsibility to observe the day that honors His creative act,” Wilson said. “A created being cannot honor his Creator while defying the command to keep Saturday, the Sabbath, the seventh day of the week, holy, which God Himself set aside as a memorial of His creation. During the time of trouble that immediately precedes Jesus’ return, the seventh-day Sabbath will be the central issue of conflict in the great controversy.”

Wilson added that this first message is also tied to the issue of origins: “But there is more to recognizing and worshiping God as the Creator. To worship God as the Creator means there must be a willingness to reject false theories about the origin of life, such as evolution,” he said. “It is impossible to believe in evolution and say that God is Creator of heaven and earth and all the life they contain. The two concepts do not mix. In essence, evolution is not a science; it is a false form of religion.”

The Adventist leader noted that the Second Angel’s message is a plea to abandon a dead, false and fallen religious system: “God’s people who are still in Babylon are called out so they will not be guilty of participating in her sins and will not receive the plagues that are to be poured out upon her,” Wilson said. “Therefore, Babylon is constituted by churches that teach many of the theological errors passed down through the church of the middle ages.”

Noting that those who reject the Sabbath will be angered by the support of Adventists and others for the biblical day of rest, part of the Third Angel’s message, Wilson said a time of testing will follow.

“We are so grateful for the religious freedom that is available in many countries around the world. Thank God for it; we need to use our religious liberty to defend religious liberty,” he told the congregation. “However, according to Bible prophecy, the time is coming when religious freedom will be reduced and churches will so control the government that the government will pass laws that will fulfill the wishes of the apostate churches. Anyone who disagrees with what this church/state relationship stands for will be persecuted. Don’t be afraid of that day. Lean on Jesus today and you will lean on Him in the future.”

The four-day event opened Wednesday evening, August 28. The opening ceremony began against a backdrop of 600 LCD video screens merged to form a giant display, a virtual “choir” comprised of videos of individual Adventists in the region singing “My Lord is Coming Soon” blended to offer a hymn of commitment in a division with both tremendous enthusiasm on the part of its people, but also incredible challenges in reaching others.

In a region encompassing “one quarter of the world’s population, we have a responsibility to spread the gospel,” a slide read. Slides, in English, Korean, Chinese, and Japanese, then noted the countries under the division’s aegis, reflecting that “the tears of North Koreans, God remembers,” as that country’s images were shown.

For China, that nation’s prosperity was noted, along with the comment that Christians have a “heavier” burden of “carrying the cross” in a nation of booming economic prosperity. Chinese Adventist believers performed a song, which included a performance on a traditional flute, as their cultural contribution.

Japan, whose Adventists enthusiastically participated in the opening ceremonies, was dubbed “the land of the god of money—Mammon,” where “secular men have closed their hearts.” Notwithstanding, leaders from the Japan Union Mission wore T-shirts emblazoned with “Jesus@Tokyo” as emblematic of their effort to reach one of the world’s largest cities.

Participants from Taiwan and Mongolia were heartily welcomed, particularly by the hundreds of Adventist believers from China who were seated just before the convention center’s main stage. The presentation noted the “wilderness” nature of much of Mongolia; while in Taiwan the need for growing “the root of faith and Christian culture” was emphasized.

The appearance of Taiwan brought together two presidents of the mission field on the: Steven Wu, current mission field president, and Robert S. Folkenberg, Jr., former president, who now leads the China Union Mission from offices in Hong Kong. Later, leaders of each administrative region, along with division president Jaiyrong Lee, reaffirmed the commitment in their regions to spreading the good news.

In turn, Kisung Bang, Jeju Island’s provincial governor, gave an impassioned word of welcome, speaking for five minutes in recognition of Seventh-day Adventists and greeting those who traveled to this spot off the southern tip of the Republic of Korea.