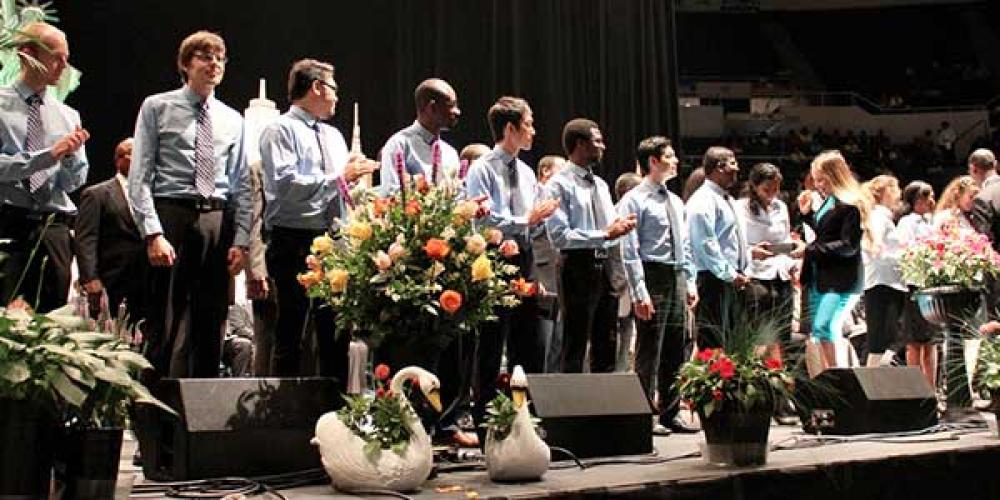 Wearing a dark blue baptismal robe, Tomas Olivera of Peekskill, New York, stepped into the giant pool placed before the platform at the Nassau Veterans Memorial Coliseum on this afternoon and knew only one thing: he was finally about to be baptized. 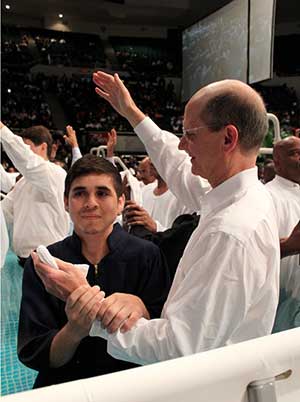 It quickly developed that the Seventh-day Adventist pastor who placed Olivera under the water was the president of the Adventist world church, Pastor Ted N. C. Wilson, who had just completed a sermon about the role this religious movement would play at the end of time.

Olivera was all smiles, as was John MacKneil, a former resident of New York’s Greenwich Village, who returned to the Historic Seventh-day Adventist Church on West 11th Street to hear Wilson present a four-week “Revelation of Hope” seminar. MacKneil was also baptized by Wilson, and was a bit overcome at the experience.

“It’s an inspiration to be baptized by this man of God,” MacKneil said, standing next to Wilson, who briefly interned at that church when he first began his ministry. “I wanted to be baptized; I needed to be baptized. I feel good and I feel inspired.” Both MacKneil and Wilson said MacKneil’s brother would also soon join the church.

Inspiration was certainly the theme for this day of celebration and commitment, which was held under the banner of a joint campmeeting of the Greater New York and Northeastern Conferences, something local officials said was a first for the two groups. Adventists came from all over the region – joined by officials of the Adventist Church world headquarters and the denomination’s North American Division, as well as from even farther afield – to mark the completion of an initial phase of urban evangelism and the welcoming of hundreds of new believers. At least 150 were baptized at the Nassau Coliseum venue, evangeslist Mark Finley told Adventist Review, with many more in area churches the same morning. Estimates point to nearly 2,000 baptisms in the NY13 campaign before today's event.

Hundreds more had been baptized before the event, as the New York City area hosted more than 400 evangelistic outreach events held by Adventist congregations. As Wilson said of the NY13 effort during his sermon, “This is not a spectator sport,” noting that several Adventist world church vice presidents and other world church leaders had conducted campaigns in the area as well. 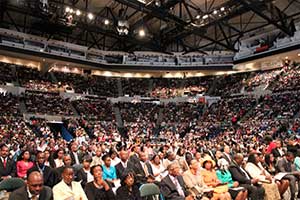 At least one other division leader came to observe the results: Erton Köhler, president of the South American Division, and his wife Adriene were spotted among the worshippers Sabbath morning, no doubt happy that the “Arautos do Rei,” the Brazilian “King’s Heralds” quartet, were part of the morning’s worship music.

Music wasn’t the only cause for happiness that morning: several public officials came to publicly acknowledge the positive impact the Seventh-day Adventist Church had on the community. Mayor Wayne J. Hall, Sr., of neighboring Hempstead, New York, welcomed the Adventists, and Una S. T. Clarke, a former member of the New York City Council and mother of U.S. Rep. Yvette Clarke (D-Brooklyn) was also recognized for her presence at the event.

But the greatest praise for Seventh-day Adventists came from Bill DeBlasio, who holds a citywide office as New York City Public Advocate, a job formerly known as president of the City Council.

“I represent all 8.4 million New Yorkers,” DeBlasio said. “And I come to bring greetings and appreciation” for the work Adventists are doing in the community, he added.

“I was moved by the work of your young people after Hurricane Sandy struck. Every day, the Seventh-day Adventist Church is doing good works in the City of New York,” De Blasio said. He lauded Adventist efforts in promoting healthy living and said the church’s schools comprise “one of the greatest educational systems on Earth.”

DeBlasio concluded saying,  “Every day [Seventh-day Adventists] make us a better and a stronger city. I say, ‘God bless you.’” 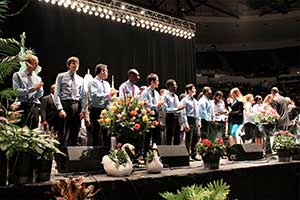 Following the comments of these public officials, Adventist evangelist Mark Finley prayed for Hall, Clarke, and DeBlasio, each of whom was also greeted by Wilson.

Wilson, in his morning message, emphasized that the June 29 event, though historic, isn’t the end of outreach here: “NY13 continues until Jesus comes!” he declared.

Speaking about the “little scroll” that would be sweet to taste but “bitter in the belly” (Revelation 10:8-9), Wilson linked the disappointment of the early disciples, who thought Jesus would establish the Kingdom of God during His time on Earth but instead was crucified, buried, and resurrected, with that of the early Millerites. The 1840s Millerites, out of whom the Seventh-day Adventist Church eventually emerged, initially thought that the 2,300-day prophecy of Daniel 8 pointed to the return of Christ to Earth in October of 1844.

Instead, the first-century disciples began preaching the gospel and, as Acts 17:6 records, “turned the world upside down.” So too, Wilson said, Seventh-day Adventists – the spiritual descendants of the disappointed Millerites – have reached out around the world bringing the three angels’ messages and the hope that Jesus is coming soon.

“This is not another church,” Wilson said. “The Seventh-day Adventist Church is a movement of God.”

Noting the church’s presence in over 200 nations and territories around the globe, Wilson added praise for the church’s media outreach, noting “Adventist World Radio is making a major impact around the world,” and praising church-owned Hope Channel and supporting television ministry 3ABN for their part in the media outreach.

Wilson again emphasized that the day’s event was not the “end” of outreach in the region. He told the thousands gathered for worship and celebration, “We came to New York to highlight ‘Mission to the Cities.’ This is not a culmination today in New York City: the work is continuing.”

Speaking with Adventist Review while waiting to baptize Olivera, Wilson said his own campaign was “an amazing experience in Greenwich Village. The audience stayed with us the whole time.”

Members of the congregation were impressed. Duane Cady, interim president of Atlantic Union College, a church-owned institution in South Lancaster, Mass., was visiting from his home in Syracuse, New York.

Cady, also a former board chairman of the American Medical Association, choked back tears as he contemplated the number of new Adventists being baptized.

As the baptisms continued, and an afternoon of music and testimony loomed, the joyfulness promised to remain for quite some time.