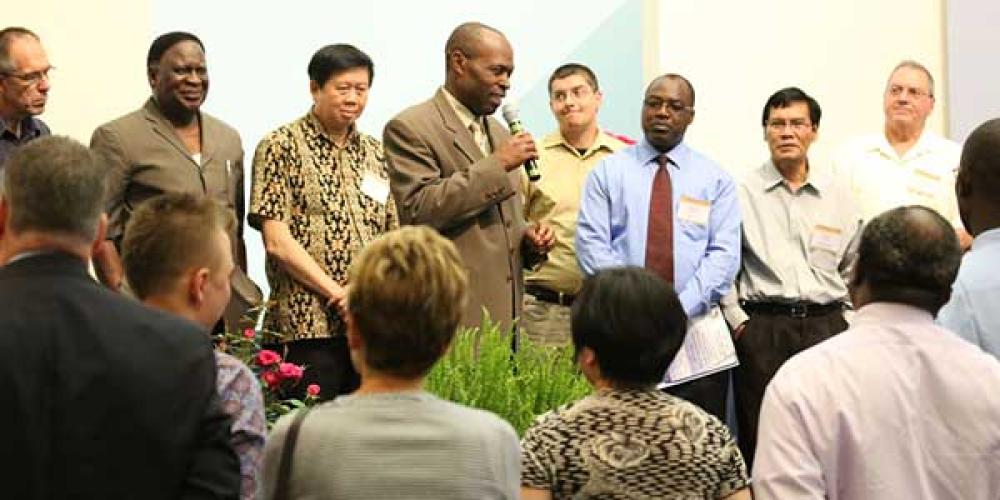 Scores of Seventh-day Adventists from around the world are learning and sharing ideas for urban outreach at a New York church that’s been turned into a giant classroom this month.

The Adventist Church’s International Field School of Evangelism is part of the denomination’s NY13 outreach initiative, which is launching a worldwide push to reach major metropolitian areas. The school is meeting at the Luso Brazilian Adventist Church in Corona, New York. The Adventist world church has sent at least three people from each of its 13 world divisions to attend the school.

The NY13 initiative is the first in the “Mission to the Cities” campaign, which was unveiled in 2011 by Adventist Church President Ted N. C. Wilson. This year’s outreach meetings and training in New York City are the basis for future outreach campaigns worldwide.

The school is holding a full-length curriculum during the week from June 7 to 29, and an intensive class will be taught from June 23 to 29. More than 32 students have registered for both tracts, organizers said.

Many students said the urban focus is key for their home territory. Kwon JohngHaeng, Adventist Mission coordinator for the Northern Asia-Pacific Division, based in South Korea, said his region has 23 metro areas with more than 6 million people.

“The School of Evangelism, especially focusing on urban evangelism, is a great opportunity to learn and share with people from other divisions, countries and cultures,” Kwon said. “While we may not apply everything that we learn here, we are learning principles from one another on how to approach big cities.”

Chukwuemeka Abaribe, a district pastor in Nigeria, said the school has been “awesome.”

“We’ve been challenged and our eyes have been opened by new methods of evangelism at home," he said. "Most times back home, I must confess, it’s been baptism, baptism, baptism. But our calling is to make disciples.”

Abaribe said he will work to make sure future evangelism campaigns in his district will include several months of community service and involvement by church members, as well as follow-up work.

“The feedback we’re getting is that in general people are very thankful for this school of evangelism,” said Robert Costa, associate secretary of the Adventist Church’s Ministerial Association and coordinator of the program.

“We’re learning how to reach people in cities in ways that are sensitive to their cultural context,” he said. “The goal is to equip leaders with tools to launch comprehensive evangelism initiatives in their own territories.”

Costa said the focus is on conducting “blended ministry,” with a combination of personal evangelism and community service.

“We’re not talking about big, massive events, but reaching one person, a secular post-modern mind,” Costa said. “We want to take the approach of a personal touch.”

“The unity and excitement of all the activity in recent weeks is very encouraging to long-time New York members and leaders,” said Jerry Page, secretary of the Adventist world church's Ministerial Association. “Barriers are coming down and conferences and pastors are praying together and working unitedly to train, equip and empower lay people to lead out in various ongoing outreach ministries. [This] is a marathon of compassion that must have an ongoing and sustained presence in the cities, and must continue beyond 2013.”