The Seventh-day Adventist Church’s North American Division continues to send the most volunteers of any of the denomination’s 13 world divisions. But in recent years, the number of university student missionaries (SMs) has slipped.

While Southern University in Tennessee and Walla Walla University in Washington each regularly send more than 40 SMs for a year of overseas service, ranks of deployed volunteers have dwindled.

Elden Ramirez is hoping to change that. As the division’s new director of the Office of Volunteer Ministries, he’s planning an upcoming barrage of marketing and recruiting at all North American Adventist colleges.

In an interview, the 38-year-old Ramirez, a former church planter and Youth Ministries director, discussed how to increase the number of SMs and why someone in any part of the world should consider serving as a volunteer.

He also revealed why he, as an American Hispanic, who is fluent in English, Spanish and Portuguese, has a first name not usually found in his native El Salvador. Edited excerpts:

Adventist News Network: Why should someone be a student missionary?

Elden Ramirez: It’s a life-changing experience. Some students return and change their major to education or medical work or engineering, but many return to their major of study with a more defined focus. Plus you see the world, experience God, and fulfill your mission. I've worked with returning student missionaries, and I can tell you that it gives them a different worldview. It helps them understand what’s out there, that our Adventist Church isn’t just their local congregation, but rather a denomination that is making a difference worldwide. The other day I was listening to a TED Talks speech and the speaker said that in order to have drive and excitement in life you need three things: autonomy, be learning something, and have a purpose. Without a doubt, you have all those three things as an SM. 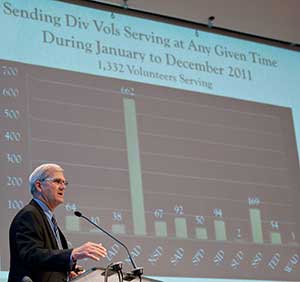 ANN: How can you encourage more people to be student missionaries?

Ramirez: Awareness. To be honest, I would like to take this God given opportunity to build on the platform that is already in place and create awareness about this great ministry. We are just finishing building our new website and began developing new promotional material that can help communicate what the advantages are of serving. People in North America can go to Hesaidgo.org and look at all the mission opportunities around the world and pray about it. For people around the world, there is the website Adventistvolunteers.org.

ANN: How are you going to recruit and market?

Ramirez: When I was a boy, I used to get excited to see those Mission Spotlight short films that showed a project somewhere in Africa or in a village in the Amazon. I never saw it from the perspective of “Let’s give to this project.” I always looked at it saying, “I want to go there and be a missionary one day.” That was exciting to me. Now that I’m older and God has given me this opportunity, I see myself creating similar short videos; not to ask for funding, but to share the need that is out there. We’ll be sending these to college and university chaplains. I’m also planning to visit each college and university to share and open my heart and practically say, “Listen, we need your help, and you can make a big difference.”

ANN: What support can this office offer to those schools that for years haven’t had a strong mission club or emphasis?

Ramirez: I think by creating relationships they will feel open to call our office and request the resources that we have available for them. Also, by sharing with them the new implementations from other sister educational institutions. I just visited La Sierra University and it was nice to hear from the students their ideas of how we can make this happen. Chaplain Sam Leonor has a mission emphasis week. Others might start a big Missions weekend program. If some of these universities get on board I think we can start to get those numbers up fairly soon.

ANN: How can we encourage all colleges and universities to have a strong missions club?

Ramirez: I strongly believe that every college and university should have a fulltime paid position coordinating missions. In doing so, they send out a strong unspoken statement to their student body: “Missions is so important to our institution and is part of our core belief system that we have a fully funded department to promote, encourage, recruit, equip and deploy missionaries." I think it can be done. Any university would benefit from carving out a budget to fund missions.

ANN: How can more students outside of North America be encouraged to consider serving as an SM?

Ramirez: Also by creating awareness. When I was in college in Costa Rica, I never knew there were opportunities to be an SM. I’m sure I would have done it. I assume other Divisions have a similar position as mine, so we’ll probably need to get together as counterparts to promote this more.

ANN: Why did you accept the call for this position?

Ramirez: I have to think God has been calling me for mission for a long time. I’ve always been excited to see how missionaries go somewhere and make a difference. I’ve always had a burning desire to go. It’s probably in part because my name was given to me after a missionary. I’m a Latin American but I have a North American name – Elden. There was an Adventist missionary named Elden Ford who dedicated his life to Latin America. He learned Spanish and went to make a big impact in Latin America, including El Salvador. When my mom saw the work of this missionary, she said, “If I ever have a son, I will name him ‘Elden.’” That can tell you how much of an impact this minister had in our family’s life.