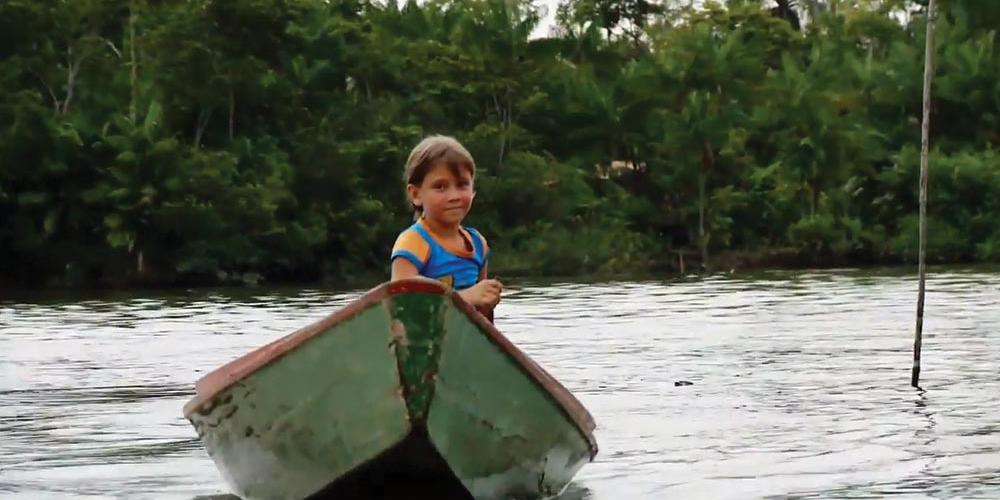 Vitoria’s family doesn’t own a car, for their island has no roads. Instead, they use a boat to get around.

To watch a video about Vitoria and her canoe ministry, visit https://www.youtube.com/watch?v=v4MfZ8KHVHY.

Vitoria’s family doesn’t own a car, for their island has no roads. Instead, they use a boat to get around. Do you think it would be fun to live on Vitoria’s island?

Vitoria’s whole family is busy sharing God’s love with others. Since Vitoria was little, she has gone with her father to meet with small groups of people who want to study the Bible.

One of Vitoria’s friends is Patrick. He and his sister sometimes went to Sabbath School, but when he missed several weeks, Vitoria decided to visit him.

“I’ll go with you,” her father said. “I want to talk to Patrick’s parents about starting a small group in their home.” Vitoria nodded happily.

Vitoria and her father paddled their boat up the river to Patrick’s home. They tied up the boat and stepped out onto the slippery logs that line the shore. Father went inside while Vitoria and Patrick sat outside and talked.

When it was time to go, Vitoria and her father said goodbye and started paddling home. “Patrick’s parents agreed to have a small group meet in their home,” Father told her.

“I talked to Patrick about it, and he wants to invite his friends to come,” Vitoria replied.

“Would you like to lead a children’s meeting?” Father asked.

“That would be great!” Vitoria answered. She had seen her father lead many small-group meetings and knew what to do.

The next week Vitoria, her brother, Daniel, and two friends from church climbed into the boat and paddled to Patrick’s house. When they arrived, several other children were already there. Patrick had invited them. Daniel and Patrick carried the Bible-study club’s materials to the house, and soon they were ready to begin.

Vitoria led the group in a welcome song, and then the children knelt on the hard, wooden floor and prayed.

Vitoria’s brother gave each child an activity book, while she opened her leader’s guide. She had studied the lesson carefully and could tell the Bible story well. She stopped to explain things that some of the children didn’t understand. After the story, each child opened their activity book and completed the workbook pages for that day’s lesson. It was much more fun than schoolwork, and Vitoria and her friends helped those who were new to studying the Bible.

When they all had finished their workbooks, they chatted while Patrick’s mother served a small snack. Soon it was time to leave, for Vitoria and her friends had to be home before the sun set because it gets dark quickly on the equator!

Vitoria has been leading the children’s small group for more than a year now. Every week she studies the lesson carefully so she knows what to say. Then, before she and her brother leave for Patrick’s house, she prays that God will keep them safe and will help her to say the things that will lead the children to Jesus. Since she started the Bible-study club, Patrick and his sister have been baptized and several other children have asked to follow Jesus. The group is praying that Patrick’s parents will give their hearts to God as well.

The small group isn’t Vitoria’s only ministry. She helps lead the Primary Sabbath School and has a part in her father’s weekly radio ministry as well. “It’s fun doing God’s work!” Vitoria says. “We all must share God’s love with those we meet every day.”

When Vitoria’s father started the radio program four years ago, he wanted to talk to grown-up people about God. Then he asked Vitoria to tell a story for the children. Now they do the program together.

“I tell a story,” Vitoria says. “We play music and share prayer requests and talk about health. My father has a short sermon.”

The radio station reaches the islands around Vitoria’s home, and many people listen. People write to say that they like the programs. The pastor says that the radio program has helped many people know about God and the church.

“Sometimes we talk about the small groups we lead,” Vitoria said. “Then when people are invited to join a small group, they already know a little bit and are willing to attend. We used to attend a church across a creek from our house,” Vitoria said. “But last year one of Dad’s small groups became a church. Now we go to that church on Sabbath. It has 25 members now, and it’s growing.”

Vitoria and her brother are members of the Pathfinder Club. “The club has several members who are not Adventists. “We invite our friends to come and introduce them to Jesus. Seven are planning to be baptized,” Vitoria says. “Sometimes Daniel and I preach in church. We’re always looking for ways to share God’s love with people.”

Vitoria and her family are busy working for Jesus. We can work for Jesus where we live too. We can tell others about God and pray for them to give their hearts to Jesus, and we can give our mission offerings every week. That way people we may never meet on this earth can learn that God loves them. There’s so much we can do! Let’s get busy—just like Vitoria.

To watch a video about Vitoria and her canoe ministry, visit https://www.youtube.com/watch?v=v4MfZ8KHVHY.