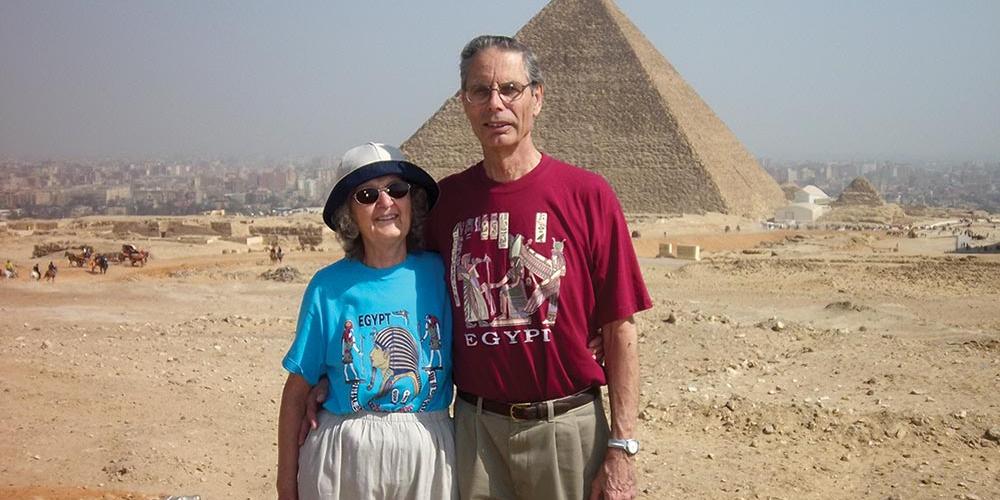 Chuck is a born teacher who taught most of his working life and into his retirement years.

"Dad, Tom and Gladys Decker need a math teacher at Nile Union Academy in Egypt. Why don’t you apply?” asked our daughter, Sylvia.*

“They wouldn’t want me,” Chuck replied. Having said that, he applied.

Guess what? They did want him—and they wanted me, too!

Chuck is a born teacher who taught most of his working life and into his retirement years. I had never taught secondary school, and I had few illusions about starting at the age of 74.

“You can just go along and volunteer at whatever suits you,” Chuck assured me. It didn’t work out quite like that. I was required to apply as a full-time volunteer as well. My assignments were to teach English as a Second Language half time and mentor the librarian and office workers the other half.

Why would we want to go to Egypt at our age? To understand that, you would need to understand Chuck. He can change gears at the drop of a hat and run off to some remote place for the adventure of it. If teaching is involved, he’s ready.

Right! I said to myself. For the next ten months he’ll be telling people he couldn’t go to Egypt because his wife didn’t want to. “One can do almost anything for ten months,” I responded with a smile. “After all, it’s not ten years!” With that, we were off.

It wasn’t that I didn’t know anything about teaching. I studied secondary education in college. I taught elementary school for a short time after graduating. And in 2002, I qualified to teach English as a second language. But standing before a room full of rowdy, undisciplined boys who spoke no English was not something I had prepared for. For the first two months, every morning when I woke up I asked myself, Janet, what in the world are you doing here?

Planning my own curriculum, preparing lesson plans, getting a handle on classroom management so learning could take place and I could retain my sanity—these were my daily challenges. Every few days I would cry on Gladys’s shoulder, and she would encourage me that I was doing just fine.

Guess what? About three months into the experiment, my students began sprouting English—honest-to-goodness meaningful sentences in English. It was amazing! It was exhilarating! It was miraculous!

Then another miracle occurred. Instead of getting under my skin, those kids began getting into my heart. Not only the ones in my classes but those in Chuck’s classes as well. I learned to entertain them in our living room, which was also our dining room, our family room, our bedroom, and our study. In short, I learned to love them.

Would I do it again? Well, not right now. You see, three of them managed to get through the red tape at the United States Embassy to get student visas. They’re currently living in our home while they go to college to follow their dreams.

* Sylvia had roomed with Gladys in college. Gladys was the director of the English as a Second Language program at Nile Union Academy where her husband, Tom, served as principal.

Janet Wildman Schlunt and her husband, Charles, have been married 55 years and have two daughters and one son, seven grandchildren, and one great-grandchild. Currently living in Indiana, they served as missionaries for 18 years in Zimbabwe, Malawi, South Africa, England, Ghana, and Egypt. Since 1965 they’ve housed some 40 students in their home.