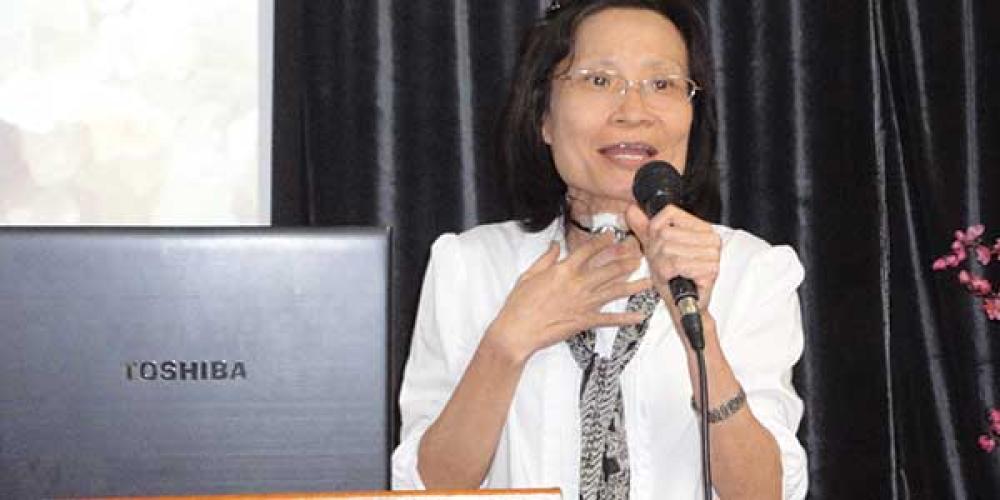 In the midst of chaotic traffic on a sunny day in Jakarta, Indonesia, a taxi driver picked up a passenger from a hospital near the Cideng district.

In the midst of chaotic traffic on a sunny day in Jakarta, Indonesia, a taxi driver picked up a passenger from a hospital near the Cideng district.

Why are you visiting the hospital today?” asked the driver. “I have been seeing a doctor for abdominal pain,” replied the passenger. “I have just discovered that I have a tumor and will need surgery.”

The driver was sympathetic. “Why don’t you go to Club Sehat (Health Club) in Cideng? Maybe they can help you. It is a place where they teach you how to live healthfully.” The passenger’s curiosity was piqued. He could not wait a moment longer and asked to be taken there right away.

Inside Club Sehat, a health lecture was in full swing. He listened with interest and then made an appointment to see Liong Pit Lin, one of the principal health lecturers. She has devoted herself to lifestyle ministry after surviving three types of cancer. Liong Pit Lin recommended several lifestyle changes, and the man faithfully followed the new principles he had learned. Several months later, his doctor found that the tumor had significantly shrunk.

A second taxi driver, in another part of town, was a Protestant Christian. Though Fendy* had retired, he had decided to continue driving as a ministry to his passengers. He was a keen listener of the weekly Adventist radio broadcasts on health and became familiar with Club Sehat through them. Fendy started attending health lectures and became so excited about the health message, he shared it with all of his passengers.

Fendy discovered that witnessing about health crossed all religious and cultural boundaries. Today he brings his passengers to Club Sehat on a regular basis.

What do these two taxi drivers have in common? For one, they are excited about Club Sehat. Second, they have both become ambassadors of Club Sehat. Their message is the same: if you wish to improve your quality of life, Club Sehat is the place to go. They have become ardent supporters because they themselves have followed the health messages and have seen their own health improve remarkably. There are no expensive advertising campaigns. By word of mouth alone, the news has spread.

Club Sehat is the brainchild of a group of laypeople from five churches who are committed to reaching out to the affluent living in Jakarta, a city of 12 million people. Since 2003 they have faithfully followed Ellen White’s counsel on reaching the cities by making their churches centers of influence [see page 10]. They started a weekly radio broadcast on health topics, drawing a continuous stream of interested listeners to Club Sehat. The health lectures given on Sabbath and Sunday afternoons are enthusiastically received. As of 2013, there are three Club Sehat locations. I have visited the clubs several times, and each time I am amazed at the receptive, excited audience.

After health presentations come 30-minute inspirational messages delivered by a pastor. Most guests stay for the sermon. Here the gospel and medical missionary work in concert.

To finance this unique ministry, our resourceful lay people pioneered the health food grocery store located in each club. After attending the lectures, members of the audience patronize the stores after sundown on Sabbath and on Sunday afternoons. There are cooking demonstrations on Sundays, and the freshly cooked vegetarian foods are sold out quickly. Part of the proceeds from the stores is reinvested into the ministry, so these health club churches are self-sufficient. They do not depend on conference subsidies: the Jakarta Conference subsidizes the rent for only one year at the outset.

Club Sehat also offers health consultations for individuals and families. Liong Pit Lin shoulders the lion’s share of the consultations. As health problems are often related to spiritual maladies, she brings biblical principles to the forefront. Here we can see Ellen White’s stated formula of success at work. She says,

“Christ’s method alone will give true success in reaching the people. The Saviour mingled with men as one who desired their good. He showed His sympathy for them, ministered to their needs, and won their confidence. Then He bade them, ‘Follow Me’” (Ministry of Healing, p. 143).

Club Sehat is the place where mingling, showing sympathy, ministering to needs, and winning confidence are taking place.

All over Jakarta, the affluent are looking for answers. They have lived the “good life,” yet many are afflicted with debilitating lifestyle diseases. They know medication is not a permanent solution, so they come looking for alternatives.

One of the people looking for answers was a top fashion designer. Though well-heeled and well- educated, he was really a broken man. While on a business trip to Bali, he happened to be staying in the same hotel as Dewi, another Club Sehat health presenter. One day he chanced upon Dewi praying and pleaded with her to pray for his health. Dewi shared some health tips with him and invited him to attend the health lectures in Jakarta. After he returned to Jakarta, Liong Pit Lin and Dewi visited him in his home. He followed their recommendations and couldn’t help but notice the marked improvement in his health. Later, he attended health seminars at Club Sehat and quit smoking. Today he is a regular visitor and often brings his friends from the entertainment world.

Except for the church pastors, all workers in this specialized ministry are volunteers. Their health ministries are lay-initiated, lay-motivated, and lay-committed. The health and spiritual messages are presented side by side, the right hand and the left hand of the message collaborating together. There are no high-pressure tactics. In a quiet and sustained manner, Club Sehat serves its community.

Whenever Ellen White’s counsel is taken seriously, God blesses abundantly. The service of Club Sehat testifies to this fact. We praise the Lord for prospering this ministry.

Acknowledgments: Arlaine Djim and Irene Tarigan have contributed to the contents and pictures of this article. Arlaine is one of the charter members of the Chinese Ministry Center (CMC), and Irene is one of the health educators of CMC.