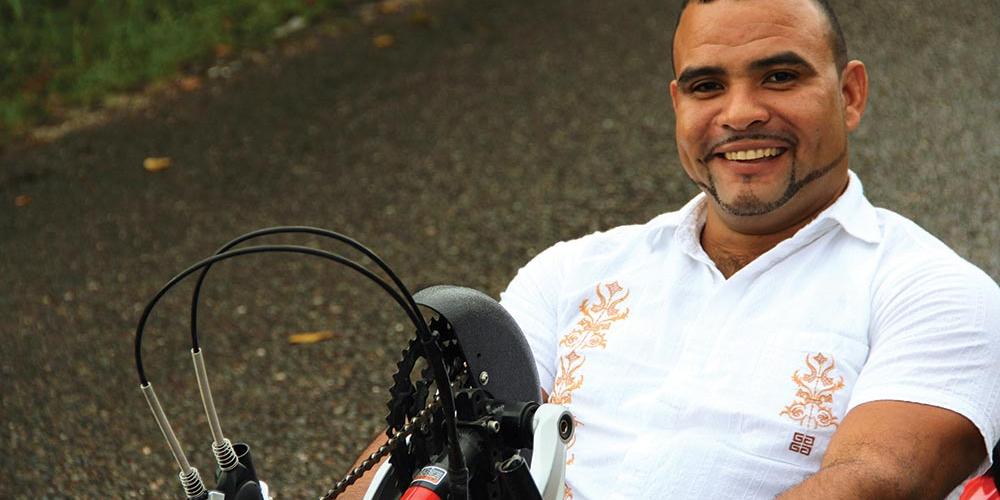 Down but Not Out

With God, if you put your mind to it, you can do anything He wants you to do!

I’m the second of twins—born 20 minutes after my brother. We grew up in the country of Belize, in a little village named Burrell Boom.

My dad grew up as an Adventist, but later he decided to leave the church. But my mother raised us as Adventists, and I was baptized when I was around 13 years old. We traveled eight miles (12.8 kilometers) to church each week. That might not seem so far, but in Belize travel isn’t always easy. We were glad when my father built a house nearer to the church.

My dad has an electrical business. He’s responsible for planting the tall, heavy electrical poles that you see along the sides of roads. It’s hard work to dig down six feet (1.8 meters) and then use a big machine to lift up the pole. My dad’s workers would then climb the poles and install everything to make them work.

When we were old enough, my brother and I started climbing poles for our dad. It’s very hard and dangerous work. One day as I was climbing, the safety strap was biting into my leg. I put my weight on it, hoping it would stop hurting, but then I fell 40 feet (12 meters) onto a rock and was knocked unconscious. When I awoke, I tried to move, but I couldn’t. After a long, hard journey to the hospital, we finally arrived. The doctor put a big needle in my foot, but I didn’t feel a thing. They said I would never walk again.

But the faith I was raised with brought me hope. I felt so calm and peaceful. As my mother stood at my bedside crying, I told her, “Don’t worry, Mom. I’ll be OK.” I always remember that moment. It matters how your parents raise you. God allowed me to handle this crisis and go through it not stressing out, but having faith that something good would come out of it and that I would be all right.

One day while on the Internet at home I found a picture of a hand-pedaled bike. I downloaded the picture, saved up some money to buy materials, and then built my own bike. When it was ready, I was surprised by how everything worked so perfectly. No one knew what it was. As I rode places everyone was waving at me and I felt happy.

One day I met some Americans who were riding their bicycles in Belize. They had biked a long way, and they stayed at a place near my home. When I went to my dad’s shop, they saw my bike and started taking pictures. They told me that they would send them to me by e-mail. They sent the pictures to others as well, and soon someone from our Belize TV station called me for an interview. That gave me the opportunity to tell my story and share my faith with the entire country!

I also wanted to raise awareness of disabilities, so I partnered with Care Belize, an organization that works with people with disabilities and their families. I planned to bike across Belize—a 90-mile (144.84 kilometer) trip. A business from Germany heard about my plans and sponsored materials for me to build another bike, because the first one I had made was very heavy. I trained on the heavy one, but then made the actual 90-mile trip on the new aluminum-frame bike. I did the ride in just three days!

Since then, I’ve done lots of bicycle trips, traveling on all of the major highways in Belize. My message is: Don’t look at people who have disabilities as if they aren’t able to do anything. With God, if you put your mind to it, you can do anything He wants you to do!

Chad Angasan with Gina Wahlen. Chad Angasan, a native Inuit/Aleut, is a Global Mission pioneer pastoring in the village of Togiak, Alaska. Gina Wahlen serves as the editor of the Mission magazines for the Office of Adventist Mission at the Seventh-day Adventist Church world headquarters.