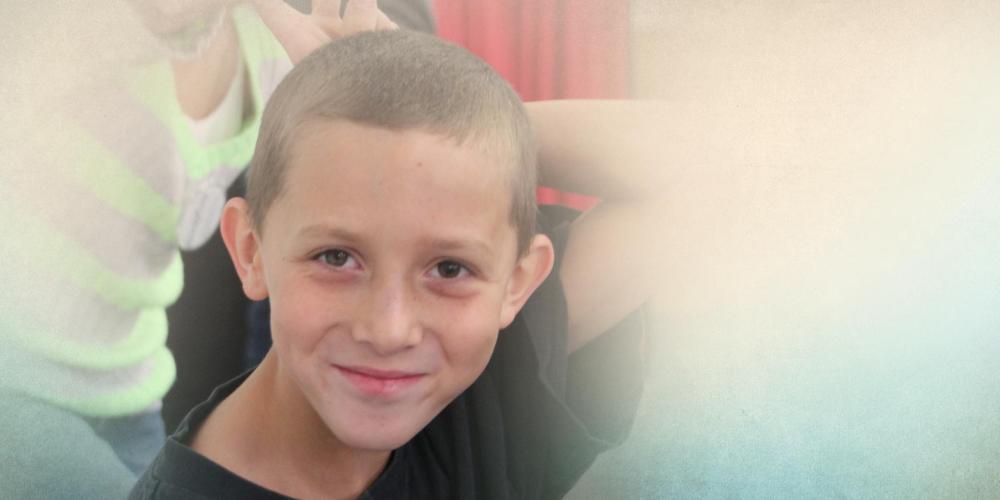 We first met Donovan when he came to our children’s brunch in October 2012. It was there that he heard his first Bible story.

With a full belly and a smile on his face, nine-year-old Donovan climbed in the front seat of Bekah’s car. Bekah, one of our missionaries at the Simplicity Outreach Center in Allentown, Pennsylvania, was giving Donovan and some of his friends a ride home from a cooking class we had hosted.

Donovan didn’t pay much attention to the lively chatter in the back seat until someone cursed. Then he immediately turned around and said in a kind-yet-serious tone, “You shouldn’t talk like that, we’re in the presence of God!” Pretty incredible words for a boy who had only recently learned about Jesus.

We first met Donovan when he came to our children’s brunch in October 2012. It was there that he heard his first Bible story. Two months later he joined our children’s Bible study, where he learned that God loves him and wants to give him eternal life. Donovan excitedly accepted the gospel invitation, and the change in his life has been dramatic.

The day Andrew, a Simplicity missionary, and Reyes, a local church member, knocked on Michelle’s door, she had to force herself off the couch. Six days earlier she had been thrown in jail while her four children were forcibly removed from her home due to a false allegation. To say she was depressed would be an understatement.

Andrew and Reyes told Michelle they were taking a survey to discover how Simplicity could serve the needs of the community. Michelle filled out the survey and then began to open up about what was happening in her life. Reyes, who is a mother herself, asked whether she could pray for Michelle.

Michelle told us later that she had only accepted Reyes’ offer for prayer because she didn’t want to be rude. “I wasn’t a Christian at the time, and I didn’t believe in prayer,” she says. “But as Reyes prayed, I felt peace and a strong impression that I would get my children back.” The next day that is exactly what happened. Michelle has been eagerly studying the Bible and volunteering at Simplicity ever since.

Donovan lived in the apartment below Michelle’s for a while, so Michelle knew him before he started coming to Simplicity. “I can’t believe he’s the same kid,” says Michelle. “I never let my kids play with him before, but he’s totally different now!”

Donovan and Michelle, and nearly all of the hundreds of people we’ve interacted with in the past year and a half, share a common experience in that they’re unchurched. Most of them don’t come from a background of faith and many have never heard the gospel.

It’s easy to understand this lack of knowledge being true in Africa or Asia. But we’ve discovered that even within the United States there are significant population groups, especially in large urban areas, that have never heard the story of Jesus. All of the children who come to our programs are hearing Bible stories for the first time in their lives.

At Simplicity we believe the essence of Christ’s method of ministry is to display the gospel before you tell the gospel. Ellen White wrote, “To reach people, wherever they are, and whatever their position or condition, and to help them in every way possible—this is true ministry” (The Ministry of Healing, p. 156).

In our attempt to emulate Christ’s method, we place a high value on building relationships in our community. Sometimes when we knock on doors, we meet people who are interested in studying the Bible immediately. But even if they’re not interested in Christianity, if we sense they need something, whether it’s someone to talk to or help locating a food bank, we’re ready and willing to invest ourselves in their lives.

As a result of this approach, we’ve had the privilege of leading two people to a decision for baptism and have 11 others who are taking Bible studies.

We’ve expanded our community programs for 2014 with in-home lifestyle coaching and cooking classes as well as a community wellness group and recovery support group at the center. This summer we’ll host a day camp for local kids as well as a summer mission intensive, offering others an opportunity to be involved in urban mission. In the fall we’ll start after-school tutoring. Within three years we hope to expand to a second city in Pennsylvania. Thank you for helping to make the ministry of Simplicity possible and please remember us in your prayers.

Wes Via is the director of the Simplicity Outreach Center in Allentown, Pennsylvania. Prior to accepting the call to Simplicity, he served as a Bible worker and evangelism coordinator for Adventist-laymen’s Services & Industries and Generation of Youth for Christ.

Established in 2012, Simplicity is one of our church’s many Life Hope Centers around the world. Six young adult missionaries work at Simplicity along with numerous volunteers from local Adventist churches and the community. Simplicity is an initiative of the Pennsylvania Conference and is supported by the Columbia Union, North American Division, and your donations to Global Mission.